The national energy grid will undergo several upgrades to ensure it can handle an anticipated 1.7 million electric cars on the road by 2030 as part of the federal government’s push towards net-zero emissions by mid-century.

The government will also significantly boost its investment in charging infrastructure, particularly in regional Australia, to help manage the transition towards an electrified national fleet and significantly cut pollution levels in the transport sector over the next decade. 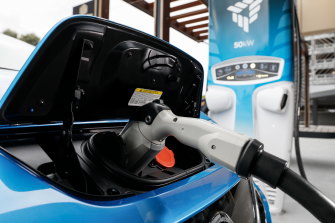 Having just returned from the Glasgow climate summit, Prime Minister Scott Morrison will on Tuesday reveal his government’s main priority will be ensuring the nation’s electricity system can handle the large-scale take-up of battery-electric vehicles over the coming decade while remaining reliable and affordable for all Australians.

The policy will include further taxpayer investment in emerging charging technologies that promote grid security and unlock additional value for consumers and electricity market participants.

The future fuels and vehicles strategy, which will receive another $178 million on top of the $72 million already committed, rejects the policies of several European nations as well as calls from industry and think tanks to set mandatory emissions limits on the nation’s light vehicle fleet, impose a hard deadline to end petrol and diesel car sales or waive several taxes such as the luxury car tax on low-emissions cars for the rest of the decade.

“Australians love their family sedan, farmers rely on their trusted ute and our economy counts on trucks and trains to deliver goods from coast to coast,” Mr Morrison said.

“We will not be forcing Australians out of the car they want to drive or penalising those who can least afford it through bans or taxes. Instead, the strategy will work to drive down the cost of low and zero-emission vehicles, and enhance consumer choice.”

Domestic sales of electric cars have risen at record levels in the past six months amid state government incentives as the industry forecasts greater price parity and consumer choice over the next two years.

While Australia’s take-up of battery-electric and plug-in hybrid cars has lagged many European and Asian nations, new car sales data released in August showed 8688 battery and plug-in EVs were sold in the first half of 2021, which is more than in any calendar year. Since last year, six more models under $65,000 have been launched in the Australian market, bringing the total available under that price to 14.

The federal government has been heavily criticised by carmakers and advocacy groups for its refusal to set targets in the sector and previous public ridicule of the technology. It earlier this year ruled out subsidising new cars to encourage their widespread take-up.

Federal Labor in March promised it would remove government charges on non-luxury EVs, including import taxes and fringe benefits tax, to drive down the sticker price for Australians who want to drive electric cars.

But instead, the federal government has let the states do the heavy lifting, with Victoria setting a sales target of 50 per cent of new vehicles to be zero emissions by 2030 while NSW announced an EV strategy to increase sales to 53 per cent by 2030-31. Both states and several others have also introduced financial rebates of up to $3000 for new EV purchases while some jurisdictions will waive stamp duty and registration fees.

Mr Morrison said the federal government would bring forward a package of priority market reforms to state and territory energy ministers to ensure the electricity grid was EV-ready. While the list of reforms is likely to grow as new issues emerge, it will start with exploring network tariff reform to encourage charging behaviour and infrastructure rollout that will support optimal grid operation, promoting smart chargers in households and tasking energy market bodies with partnering with governments on grid integration.

As part of a “fleet-first” strategy, which will encourage companies to invest in low-emissions cars and in turn flood the second-hand market with EVs, the Australian Taxation Office will investigate issuing updated guidance for business on the tax treatment of low-emissions vehicles to provide clarity for fleet purchasing.

Fascinating answers to perplexing questions delivered to your inbox every week. Sign up to get our new Explainer newsletter here.