Supporters of Christian Porter’s accuser have vowed to keep pressure on the government as it took the unusual step of preventing a bill going to Parliament for an inquiry into the allegations.

Greens senator Larissa Waters accused the government in the Senate chamber of thriving on secrecy after it blocked her from introducing the legislation. 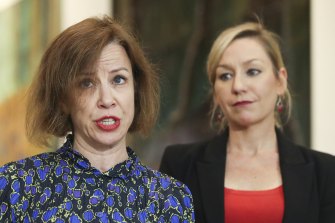 Jo Dyer and Senator Larissa Waters during a press conference on a proposed bill to establish an inquiry into Christian Porter’s fitness to be a minister.Credit:Alex Ellinghausen

She said earlier she felt compelled to “step into the breach” and attempt to set up a commission of inquiry to decide whether Mr Porter was a fit and proper person to be a cabinet minister while he faces the accusation he raped a woman in the late 1980s, when they were both teenagers.

Jo Dyer, a long-time friend of Porter’s accuser who learned of the allegations in 2019 as her friend prepared to take them to police, said the accusations were “serious, considered and believed by many” and required investigation.

“So far, the only inquiry that has been made was Scott Morrison saying to Christian Porter, ‘did it happen?’ and Christian Porter saying ‘no it didn’t’. That’s it,” she said in Canberra where she was discussing Senator Waters’ bill with MPs.

“The government should be on notice that until such an [independent] investigation has occurred, we will not let this matter rest. There will be no clear air for the government in the lead up to the election whilst this issue remains unresolved.”

The government stymied two attempts by Senator Waters to introduce the legislation to the Senate on Wednesday evening. The move was highly unusual.

Senator Waters angrily demanded in the chamber to know who had directed government senators to shut it down without any debate.

“By all means, go to the election with this as your position and I look forward to you being condemned to the dustbin of history on the opposition benches for many years to come.”