It seems a lifetime ago that hundreds of competing nations marched into Tokyo’s shiny new 68,000-capacity Olympic stadium for the opening ceremony of the 2020 Games. On Sunday, that same stadium will host the closing ceremony, all 68,000 seats still empty, as the Olympic flame will be extinguished until Paris 2024. Or 2025, pending another pandemic. 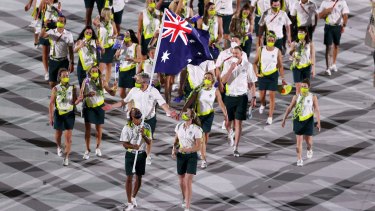 Team Australia at the opening ceremony.Credit:Getty

The Tokyo Olympics have been a flurry of conflicting emotions, and it’s been an exhausting fortnight for athletes and viewers alike. We cheer, boo, fume and vent in equal measure. There are joyous wins, crushing defeats, remarkable comebacks and hilarious slip-ups.

And in that same way, Channel Seven’s coverage of the Tokyo Olympics delivered a mixed bag of highs and lows. And so, in the spirit of competition, it seems only fitting that we run a critical eye over Channel Seven’s Olympic coverage.

Take your marks, get set, go!

The hosts: Thorpey, Bruce and the best of the rest

Ian Thorpe may have nine Olympic medals to his name, but I think we can all agree this was his best performance at a Olympics. The swimming legend was a revelation in the commentary box, offering the kind of invaluable insight that comes from winning five Gold medals. A natural on-air, Thorpe could read the phonebook, and it would still be worth watching.

Seven anchor Hamish McLachlan will leave with a bronze for his on-air banter. A solid effort, but room to improve should he make it to Paris. The lack of chemistry between McLachlan and co-host Abbey Gelmi was hard to ignore, and it often felt like they were meeting for the first time despite working together daily. 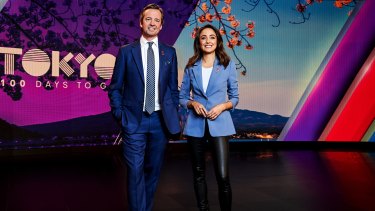 Seven’s Hamish McLachlan and Abbey Gelmi in a promotional shot for the upcoming Tokyo Olympics.Credit:Seven

Edwina Bartholomew and Matt Shirvington proved a more reliable pairing, so too Johanna Griggs and Luke Darcy. Obviously, Bruce McAvaney continued his fine run of form, and any talk of retirement needs to be hosed down immediately.

Medal: Gold, thanks to Thorpey

The platform: 7plus app is a huge minus

No one is pretending that packaging up the Olympics is an easy task, but Seven had four (sorry, five) years to get the 7plus app running smoothly. Unfortunately, the platform still proved a sticking point for audiences, with viewers rushing to Twitter to log their complaints.

Personally, I found that the onslaught of pre-roll advertisements meant you often missed key live moments. I also noticed that the lesser loved sports – badminton players are people too! – were sometimes broadcast without commentary or audio.

The sheer volume of options also made navigating difficult, Seven refusing to give the Olympics a standalone app instead settling for a “hub” within 7plus. Logging on to the app made you feel like Tom Cruise in Minority Report; so many screens, so many options, so little time. 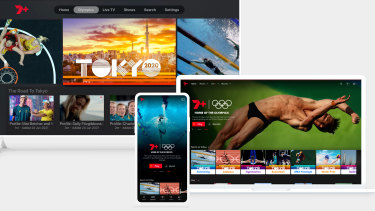 Seven has found a massive audience with its streaming of the Tokyo 2020 Olympic Games on 7plus, but the app is not without its issues.Credit:Seven

There were some welcome additions to 7plus, which enhanced the viewing experience. Offering mini-matches made it easy to catch up on missed events, while the Aussie Memorable Moments category was a nice touch. I could happily relive Cathy Freeman’s Golden run once a day, every day, for the rest of my life.

Medal: Silver, a step up from Rio

The moments: Capturing the emotion

In an Olympics defined by social distance and rigid protocol, capturing emotion was always going to be a challenge, but in this department, Seven notched up a personal best.

Crossing to the athletes’ families back in Australia proved a masterstroke and delivered a much-needed dose of humanity in an often sterile Olympics. Who amongst us wasn’t moved by the Titmus family losing their minds in Noosa while Ariarne raced to another gold?

Meanwhile, there were tears aplenty in Tokyo; from Richard Fox calling his daughter’s Golden triumph in the Women’s slalom C-1 Canoe slalom to Aussie boxer Skye Nicholson’s heartbreaking post-fight interview. If there was a world record for sobbing, then surely it’s been shattered.

Arguably the most memorable (and meme-able) moments came in the pool.

Swim coach Dean Boxall’s wild celebration after Titmus’ first Gold will go down in history, so too Kaylee McKeown’s glorious F-bomb. After powering home in the 100-metre backstroke, McKeown was asked by reporter Nathan Templeton if she had anything to say, the 20-year-old replied with a humble: “F—k yeah!”

To Seven’s credit, they aired McKeown’s joyous profanity in all its unedited glory.,

The Voice: Did you guys know The Voice is starting?

We all understand that a major sporting event presents the perfect opportunity to flog your next big reality TV show. Seven used to promote the arrival of My Kitchen Rules “after the tennis” so intensely it began to sound like a threat.

This time around, we’ve been treated to the same high-drama promo for The Voice on repeat. I’m beginning to wonder if Seven has any other programs in the can for the rest of 2021.