A redheaded student was left ‘looking like Fiona from Shrek’ when her skin turned green after she used a full bottle of ‘darker than dark’ fake tan.

Lilly Vigus, 18, from Rochester, Kent, and her flatmates decided to treat themselves to a pampering session because they were bored during lockdown.

After browsing for fake tan, Lily decided to buy a bottle of St Moriz 1 Hour Fast Tan in shade Darker Than Dark for her ‘light’ skin because it was the only one left in the shop.

Lily, who studies equine management, decided to sleep in the tan rather than wash it off but was left completely shocked after her skin turned a dark green-tinted colour. 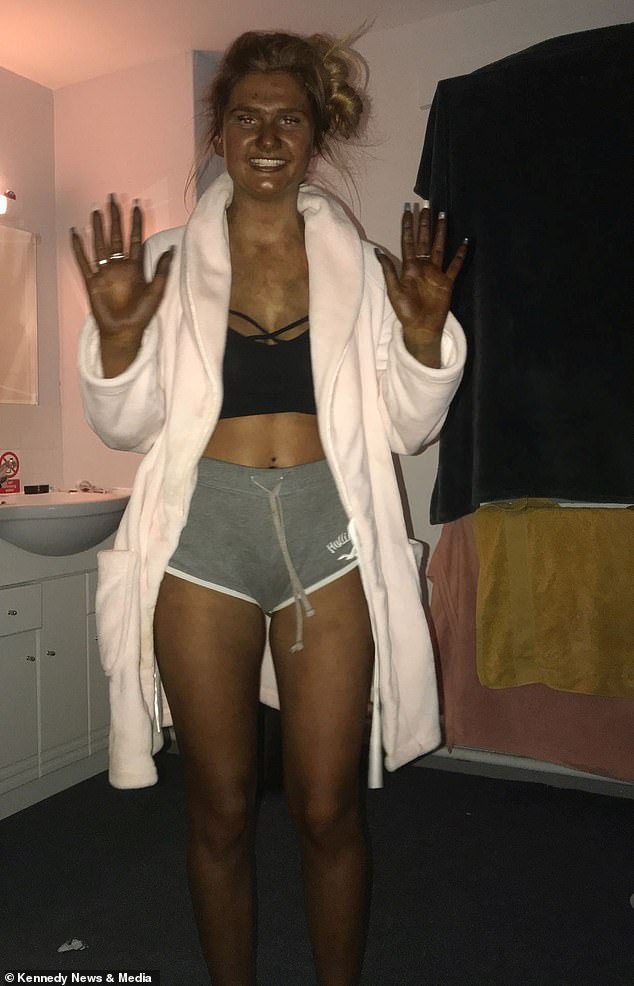 Student Lilly Vigus, 18, from Rochester Kent, was shockingly left ‘looking like Fiona from Shrek’ when her skin turned green (above) after she used a full bottle of ‘dark’ fake tan

Hilarious footage saw her revealing the mishap to her flatmates, with one of her stunned housemates shouting: ‘Lilly, I didn’t think it was that bad.’

Lily admitted that people compared her to ‘Fiona from Shrek’ because of her naturally ginger hair and ‘green skin’ after the fake tan disaster.

She explained: ‘People were calling me Fiona from Shrek because my ginger hair and green skin all matched with her.

‘Because I am ginger my skin is very, very light. If I go out in the sun I just burn instantly.

‘To get around this I fake tan. I don’t normally use a tan this dark but it was the only one left in the shop, so I decided to give it a go.

‘We decided just to put some fake tan on. Apart from horses, fake tanning is the only thing I’m interested in.’ 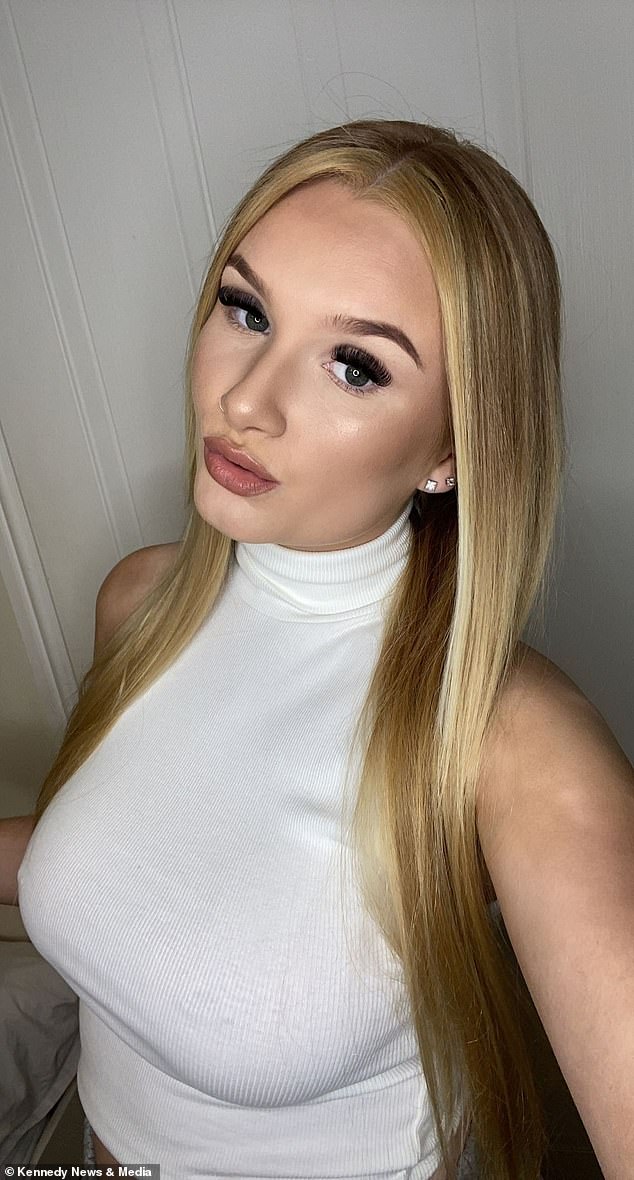 Lily (pictured), who studies equine management, and her flatmates decided to treat themselves to a pampering session because they were bored during lockdown 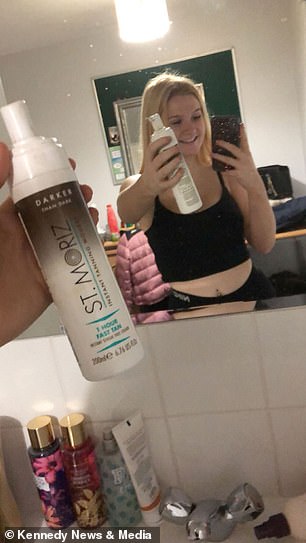 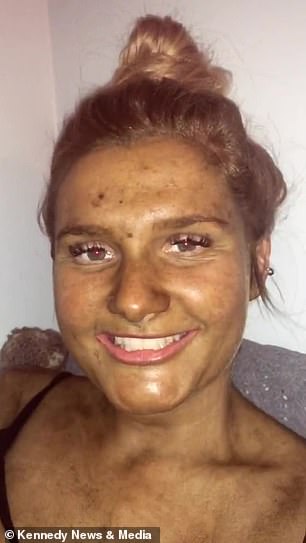 Lilly admitted that she did think her tan was looking ‘a bit dark’ after the second layer but she decided to plough on and ended up using ‘the whole bottle’.

The next morning, Lilly tried to wash the fake tan off in the shower but revealed that the water was running green ‘for ages’ – and continued to do so for ‘days’.

She continued: ‘I just decided to give it a go with the tan and I ended up using the whole bottle.

‘After the second layer I did think it was a bit dark but I decided to keep going.

‘I slept in it and the next morning I had a shower and the water just kept running green for ages. 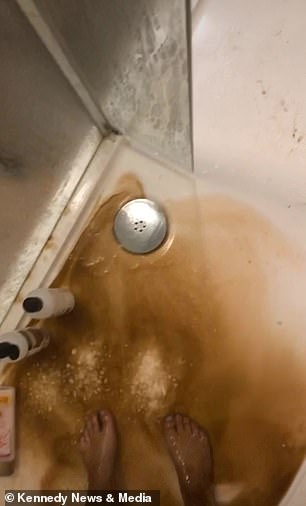 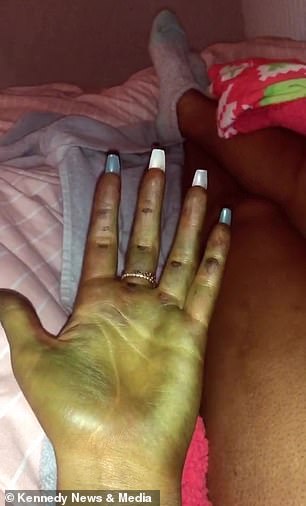 Lilly admitted she did think the tan looked dark but used the whole ‘bottle’, and when she washed the tan off in the shower (left) she said revealed the water ran green ‘for ages’ (left) 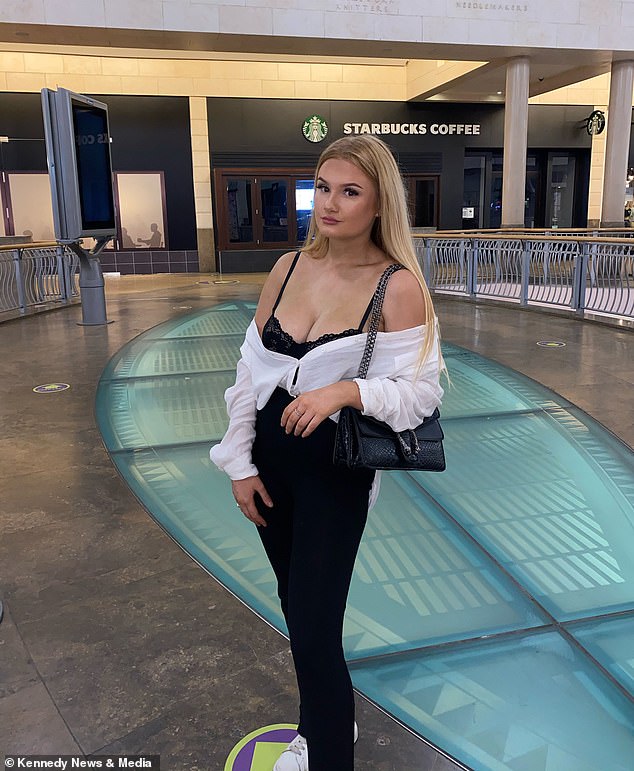 ‘Every time I washed for the next few days the water running off me was still green.

‘My housemates were just shocked at how dark it had become and they all thought it was so funny.

‘I went to breakfast the next morning and everyone just stopped and stared at me when they saw me.

A spokesperson for St Moriz said: ‘Lilly looks great after using our 1 Hour Fast Tan, we love seeing people’s results and she looks naturally tanned with a healthy glow!

‘Self-tanning is a great mood-booster and we love putting a smile on peoples face’s by helping them feel more confident!’