Navy called in to save 90,000 endangered giant clams 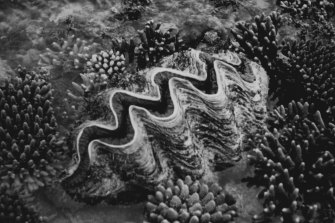 A giant clam, one of the inhabitants of the Great Barrier Reef.

Giant clams — Tridacna gigas —are considered an endangered species. But because of a too-successful breeding program in a North Queensland bay, the navy has been called in to rescue up to 90,000 clams in danger of dying from overcrowding.

Enthusiasts are calling it “the world’s biggest operation to relocate a single marine species”, and rarely has so humble a mollusc attracted so much attention — or an official military codename.

Operation Clamsaver is the result of consultations between James Cook University scientists, navy officials, the Great Barrier Reef Marine Park Authority, and the Federal Minister for the Environment, Mrs Kelly.

Eight years ago, the scientists began a program to breed the clams in Pioneer Bay on Orpheus Island north of Townsville. The project was so successful that today there are 90,000 clams, aged between two and eight years, competing for space, light and food and clogging the bay.

The oldest clams now weigh eight to ten kilograms, are up to 41 centimetres long and 21 centimetres wide, and are severely overcrowding each other.

“It is now virtually a race against time with about 6000 of the larger clams because the overcrowding has become so acute that they could die suddenly in huge numbers.”

Originally the university had planned to set up a clam farm through a commercial joint venture. Restaurants around Queensland would have offered clam soup and clam chowder specials for months. But the university could not find a partner and the navy solution was hit upon.

Because clams have to be transported in water and in a single layer, so that light can reach them, a landing craft with a large deck area was the right boat for the job. A heavy landing craft, HMAS Tarakan, has been fitted with wide shallow troughs covered in shade cloth.

The first stage of the “clam uplift” concentrates on the 6000 biggest clams. The 15-member crew of Tarakan and three marine park authority representatives have begun picking the clams out of the water and loading them on to the boats. The clams will be shipped to reefs throughout the Great Barrier Reef Marine Park and placed by hand on the sea floor in areas where the currents will distribute the clams’ larvae. It is hoped the clams will breed and replace the population which was decimated by over-harvesting in the 1970s.

Up to 10,000 of the clams will become part of a further experiment on the effect of pollution on clam growth rates and a number will be maintained as breeding stock for future experiments.