Friends fur-ever! Golden Retriever strikes up an unlikely bond with a six-month-old kitten – and even lets the tiny moggy ride on his back

An adorable video of the unlikely friendship between a golden retriever and kitten who live together has warmed the hearts of many.

The loving owner who is an analyst, shared adorable videos of Samson giving his tired best friend a ride on his back.

The heartwarming videos which have racked up hundreds of views, shows the pair playing and snuggling together. 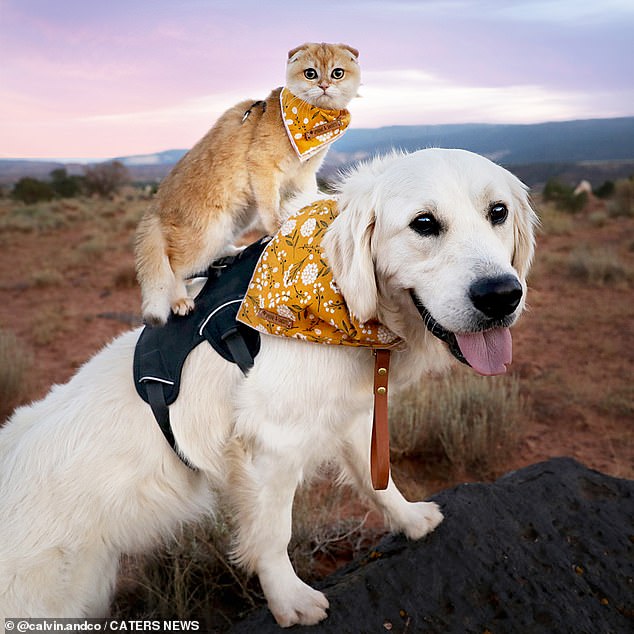 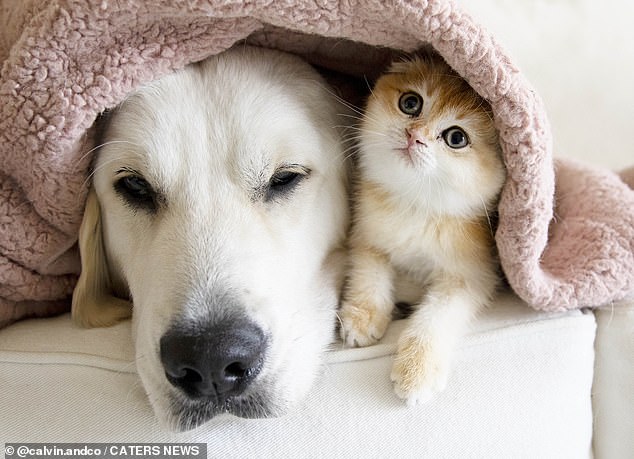 Lea explained that she decided to get a cat after seeing how excited Samson was when he first saw a moggy in Paris last year. Pictured: Samson and Cleo 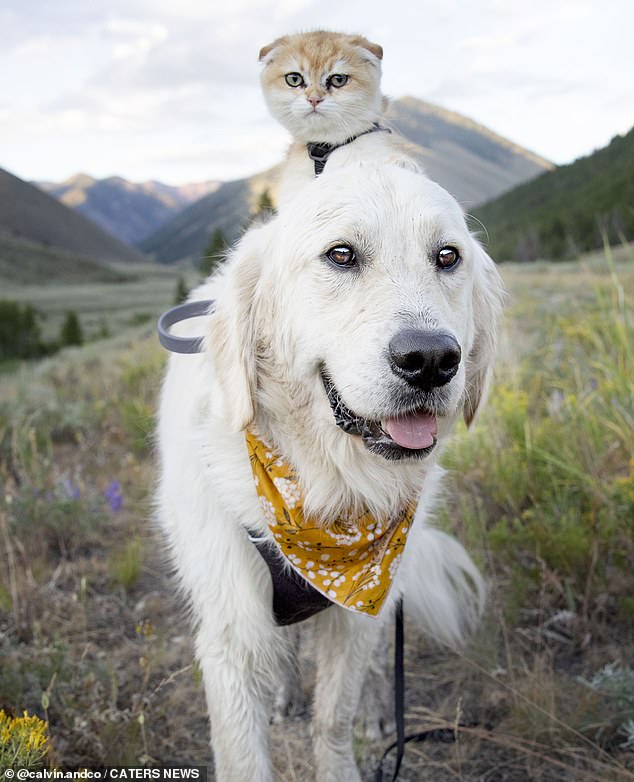 Lea said Samson is a very social and loving dog, who has taken on a fatherly figure. Pictured: Samson and Cleo

‘Samson is a very sociable and loving dog,’ said Lea. ‘He saw a cat for the first time in Paris last year and he got so excited so I got him a cat of his own.

‘He has took on a fatherly figure. Samson grooms her after dinner and they sleep together. It is amazing to watch.’

Lea explained that during hikes, Cleo tends to get tired and so she hops on to her best pal’s back until she is re-energized. 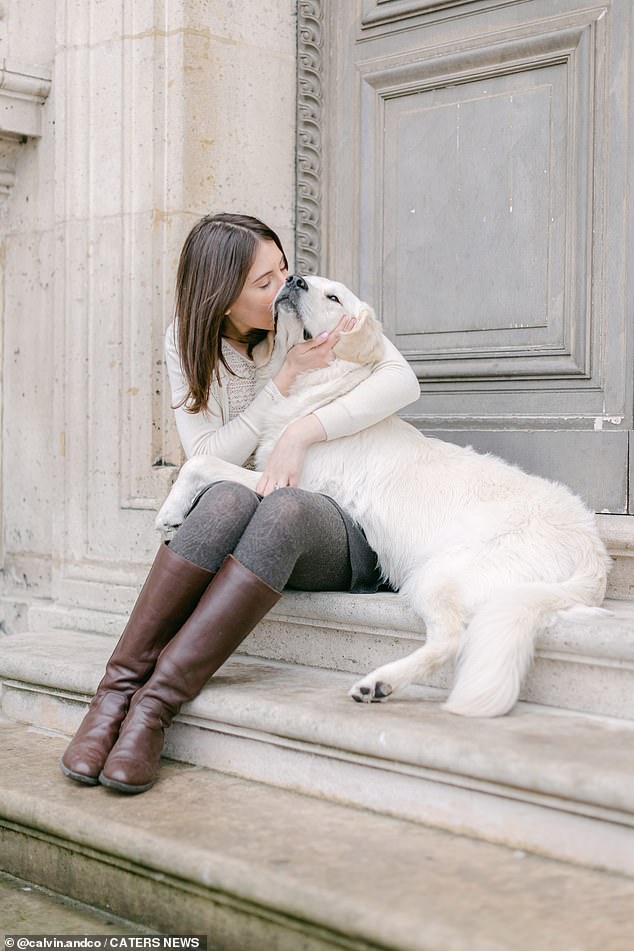 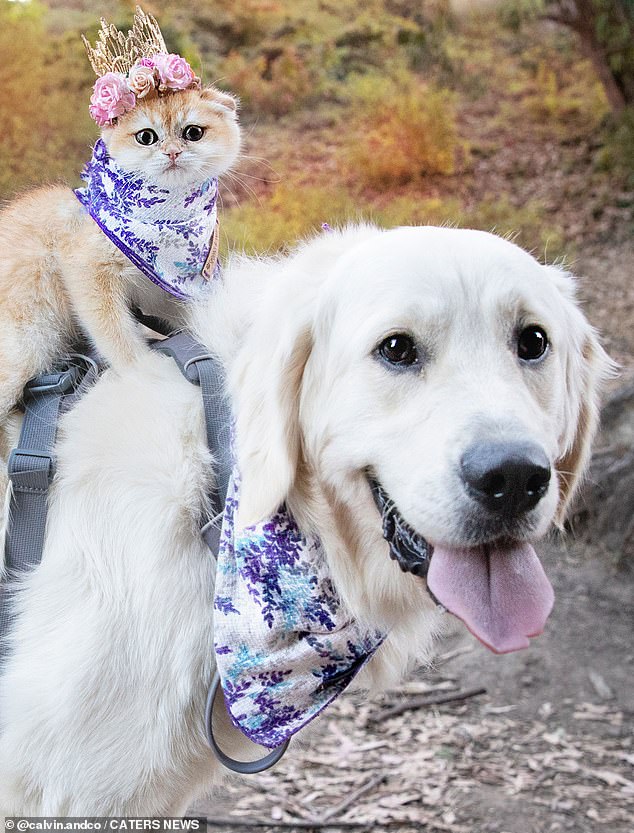 The 27-year-old said Samson carries Cleo on his back when the six-month-old kitten gets tired during hikes. Pictured: Samson and Cleo 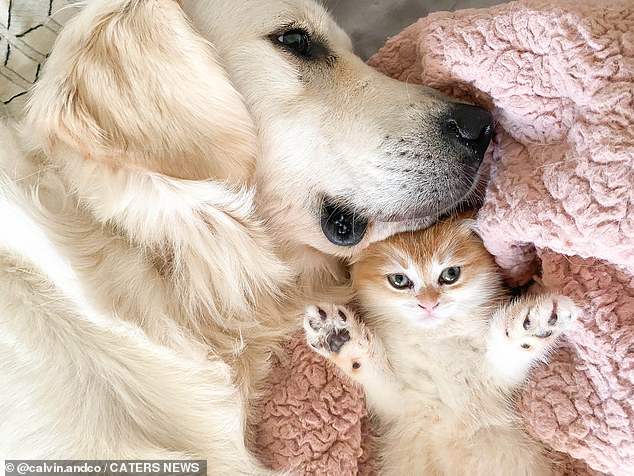 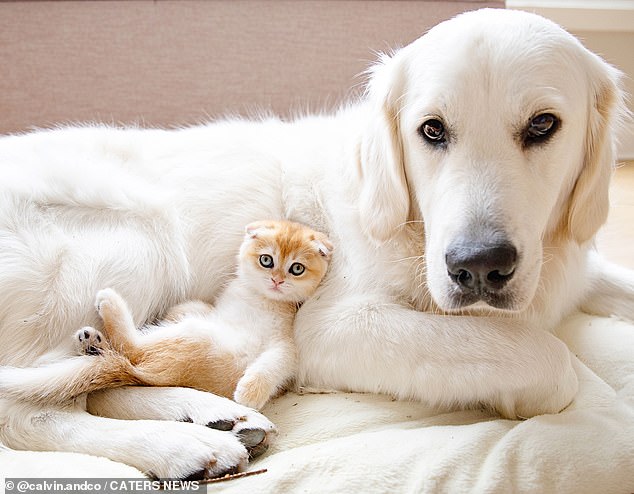 Lea revealed strangers who are in awe of the animal’s friendships have stopped to take photographs. Pictured: Cleo and Samson 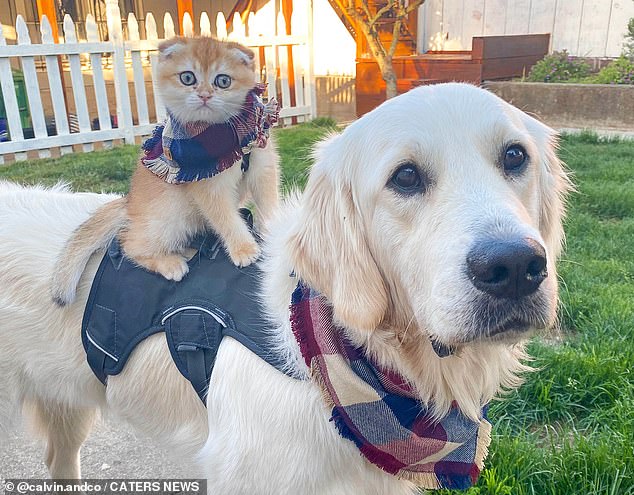 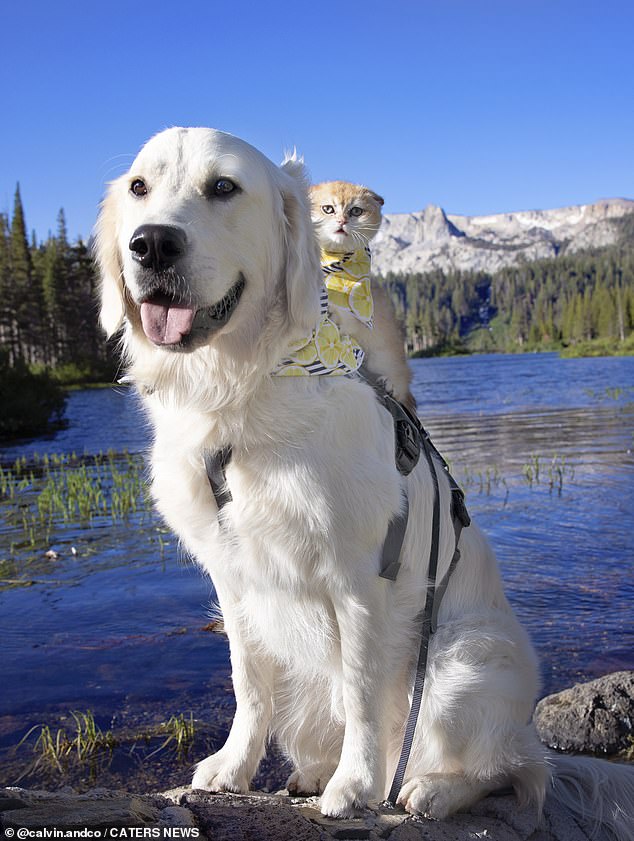 Another snap shows the adorable duo posing together alongside a scenic view. Pictured: Samson and Cleo

Strangers have been in awe with the pair and often stop to take photos.

‘People can’t believe it when they see how close they are,’ explained Lea. ‘Dogs and cats are supposed to be enemies but that couldn’t be any further from the truth with this pair.

‘We have another dog called Calvin, 4, who is a Labrador but he isn’t fazed. Cleo and Samson just clicked – she may be small and weigh three pounds but she definitely shows them who is boss.’ 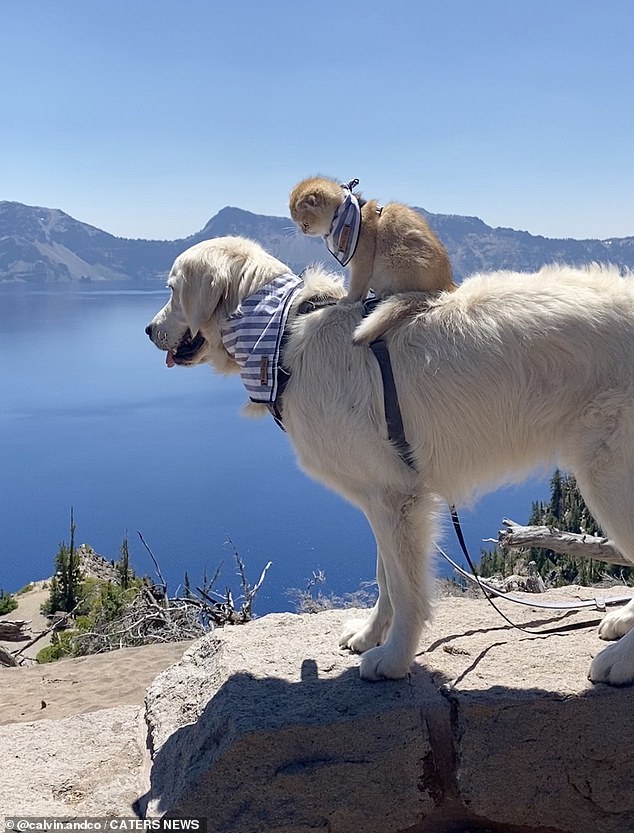 Lea said although dogs and cats are supposed to be enemies, the opposite is true of her two pets. Pictured: Samson and Cleo 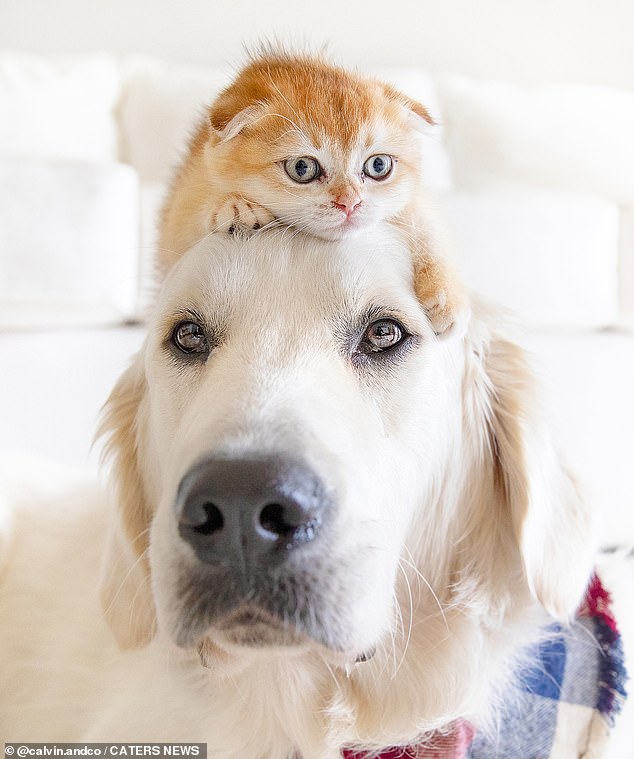 Lea said her other dog Calvin, 4, who is a Labrador, isn’t fazed by the chemistry between Samson and Cleo (pictured) 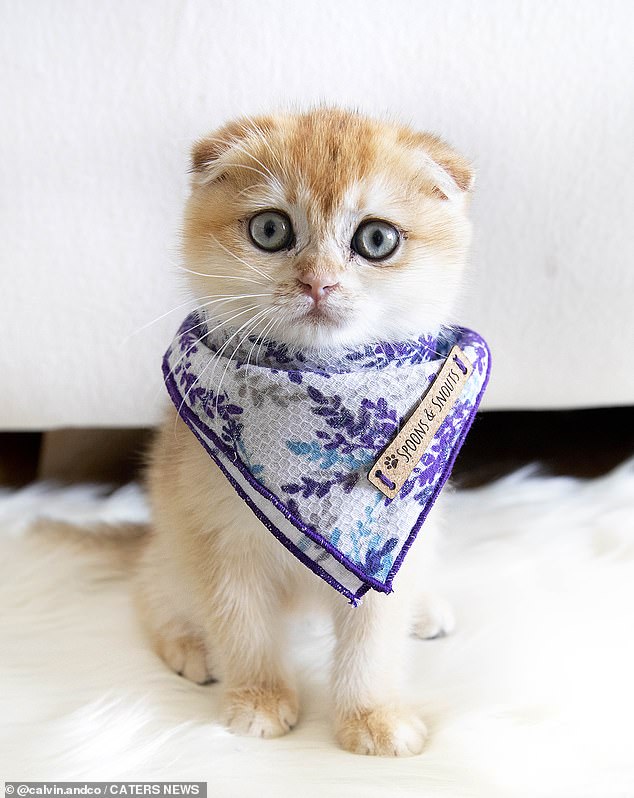 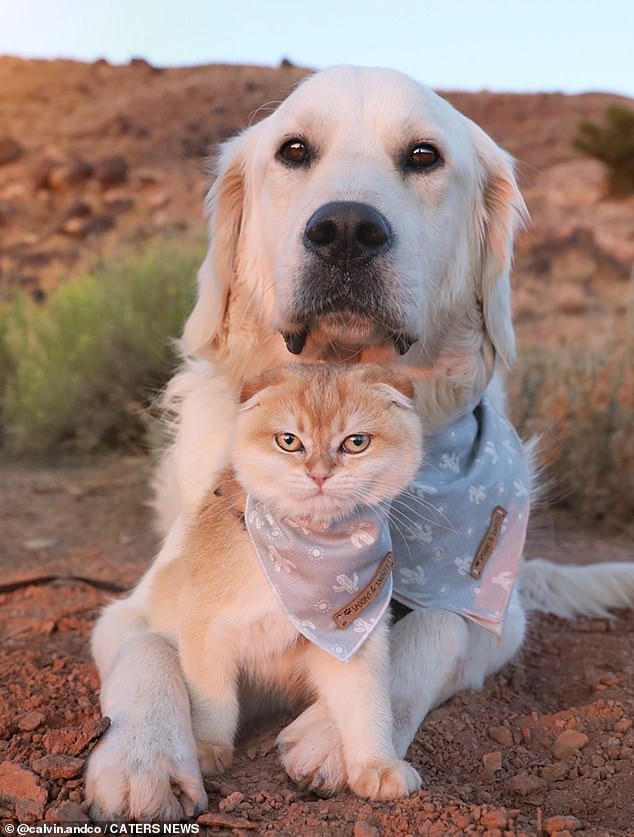