Why ‘reverse dieting’ is the secret to long-term fitness goals: Coach reveals how she sculpted her lean physique – and why eating MORE is key

An Australian fitness coach has explained the importance of ‘reverse dieting’ – a method used to re-introduce calorie intake again following a period of restriction.

Sophie Allen, from Sydney, said once clients have achieved their desired results, the next step is to gradually add calories back into the diet to boost metabolism again leading to long-term success.

‘Our goal with reverse dieting is to maintain the weight loss we’ve achieved or close to, whilst increasing how much food we can eat day to day,’ the 31-year-old trainer wrote on her website. 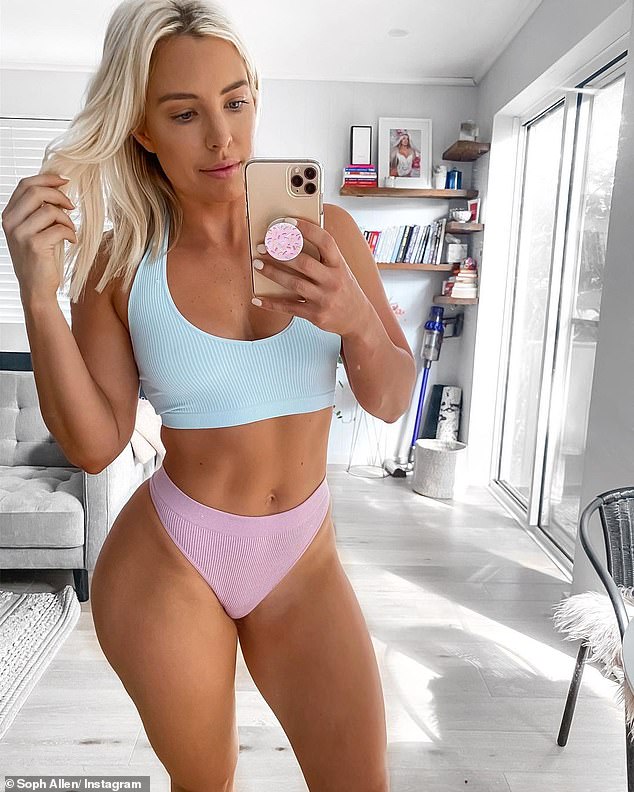 Sophie’s day on a plate

To do reverse dieting, Sophie there are two key methods that can be followed.

‘The slow and steady approach which extends the length of the diet, or jumping straight back to your new maintenance calories and reversing from there,’ she said.

For a slow and steady approach, Sophie said you need to be aware that the gradual way of increasing calories means you’re still in deficit.

‘You’re just closing the gap between deficit and new maintenance calories as you incrementally increase,’ she explained.

‘We’re still in a deficit until we reach 1,800 our predicted new maintenance calories, at which point the reverse diet really starts given we’re no longer in a deficit.’

Reverse dieting is a strategic, consistent and incremental increase of one’s caloric intake. In a way, reverse dieting is progressively overloading your meals with calories and nutrients, as opposed to sudden jumps in energy intake.

While reverse dieting can be applied in a variety of scenarios, the first example that comes to mind is gradually increasing calorie intake after being in a prominent deficit – for example, following a bodybuilding comp prep, or simply after a prolonged fat loss phase.

You may notice some weight gain in the process, even if you’ve applied a slight increase while definitely staying in a calorie deficit. Don’t panic – it’s highly unlikely to be fat! Extra food causes a little bit of fluid retention, which is temporary, normal, and will self-resolve over time.

She said the slow approach works best for those struggling mentally with the idea of weight regain – or those who have been on a low or ‘aggressive’ calorie weight-loss eating plan.

To jump straight back to new maintenance, Sophie said dieters would have ‘more flexibility to eat out and enjoy non-dieting life’ and will notice an energy increase, better sleep and mood.

Sophie explained that you need to listen to your body and understand how efficient, or inefficient your metabolism is, how long you’ve dieted for, how frequent or aggressive before choosing an approach.

‘My advice would be to add 100 to 200 calories every two weeks to begin with, then make changes weekly, and slow it down as your calories get higher,’ she said.

‘It may seem like a lot, but you’ll honestly burn that amount just with daily movement and a higher TEF (thermic effect of food) you’ll get from eating and digesting more food.’

She suggested keeping track of how you progress, how quickly you regain weight, and make slow, deliberate changes as you go.

What are Sophie’s top tips for lasting fat loss? 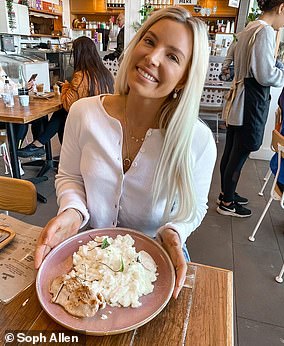 Sophie (pictured) shared the tips online. Often, she opts for something like an egg white omelette to feed her muscles

2. Move your body more and consistently. It doesn’t have to always be a workout, but you should then make sure you’re getting 10,000 steps.

3. Track your progress (either by scale weight, pictures, measurements, how clothes fit, how you feel or your strength) and make changes if things aren’t moving the way you want⁣ them to.

4. Accept that it takes time⁣ and don’t expect change to happen overnight or even in a week.

5. Don’t jump to the conclusion of a plateau before you’ve been 100 per cent consistent for three to four weeks.

7. Sleep a lot, and make sure it’s high in quality. Aim for between seven and nine hours.

8. Try to reduce stress as much as possible.

9. Get someone who knows what they’re doing to write a training and nutrition program for you.