Only Murders in the Building ★★★★
Disney+, new episodes from June 28

Right from the start, the comedic chemistry between longtime friends Steve Martin and Martin Short and their younger but equally luminous co-star, Selena Gomez, was a sheer delight. There was a real sense of playfulness too as, together with showrunner John Hoffman (who created the series with Martin), they revelled in meta asides and character flourishes in the wacky yet touching tale of three Manhattan misfits who come together to make an investigative podcast about a murder in their apartment building. 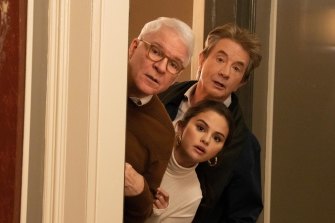 The comedic chemistry of Steve Martin, Martin Short and Selena Gomez continues to fire in season 2 of Only Murders In The Building.Credit:Disney+

The new second season brings more of the same, along with an even more ebullient sense of freedom stemming from the first being so widely adored. And the sublime cast is further bolstered by the likes of Shirley MacLaine, Michael Rapaport and Amy Schumer.

But for Charles, Oliver and Mabel (Martin, Short and Gomez) the stakes are higher and the quandaries stickier. This time they’re prime suspects in the murder of the building’s formidable owners’-board president, Bunny Folger (Jayne Houdyshell), who was found dying in Mabel’s apartment. 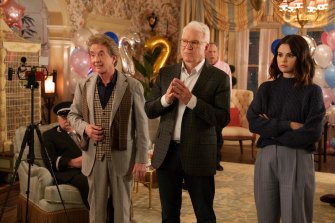 Martin Short, Steve Martin and Selena Gomez in season two of Only Murders in the Building.Credit:Craig Blankenhorn/Hulu

But the crisis is also bringing opportunities. Actor Charles’s daggy old TV series might get a reboot. New neighbour Amy Schumer (herself) tantalises the cash-strapped Oliver by talking about buying the TV rights to the podcast for a vanity project. Isolated artist Mabel is invited to join the circle of grungy gallery owner Alice (Gomez’s own longtime friend Cara Delevingne).

And, fortunately for us, we haven’t seen the last of the gruffly entertaining Houdysell – she’s still around as the story expands backwards into the past and paints a fuller and unexpectedly poignant picture of the iron-fisted Bunny.

Needless to say, Only Murders remains catnip for fans of Martin and Short, and a rare kind of cross-generational connection. It’s marvellous. 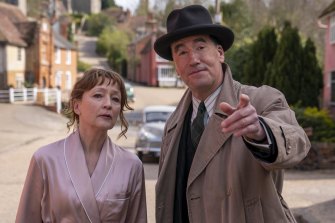 Lesley Manville and Tim McMullan in Magpie Murders, a whodunit-within-a-whodunit based on the novel by Anthony Horowitz.Credit:Britbox

Lesley Manville is perfect in this handsome and beautifully crafted whodunit-within-a-whodunit based on the novel by Anthony Horowitz.

Manville is Susan Ryeland, a book editor at a London publishing house whose future hangs on a forthcoming murder-mystery from bestselling writer Alan Conway (Game of Thrones’ Conleth Hill). When the manuscript turns up minus the all-important final chapter and Conway turns up dead, Susan heads out to his country estate and turns amateur sleuth to try to solve both mysteries.

The twist: the deeply unpleasant Conway based the characters in the book on people in his life – all of whom might have wanted him dead. So things play out in parallel in fiction and in real life. Those playing different versions of their characters in the two worlds include the reliably brilliant Daniel Mays as a less-than-brilliant police detective with a mouthful of a Suffolk accent.

Oscar-nominated director Peter Cattaneo (The Full Monty) handles the complex set-up with style and aplomb, and the script affords Manville the space to build a three-dimensional character who has concerns outside the central plot. Brilliant.

Father of the Bride
Binge, Foxtel On Demand 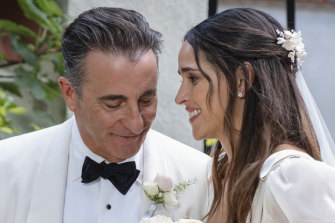 Andy Garcia and Adria Arjona in the remake of Father Of The Bride.Credit:HBO Max/Binge

The prospect of Andy Garcia and Gloria Estefan in a Miami Cuban-flavoured remake of Father of the Bride is an intriguing one. Sadly, this new movie strips out everything that made the 1991 Steve Martin version (Disney+) so special. There’s no narration, so there’s little insight into the inner life of Garcia’s character, and an ill-conceived divorce subplot makes him preoccupied with his wife (Estefan) rather than his soon-to-be married daughter (Adria Arjona). Saturday Night Live’s Chloe Fineman can add little as a bossy wedding planner.

Below Deck Down Under
Hayu

There’s scarcely a ripple of drama as this reality series assembles a highly telegenic young crew to run a luxury charter yacht taking rich folk around the Great Barrier Reef. Perhaps the calm comes from the top – Australian skipper Jason seems an especially level-headed sort. But with some crew members lacking the necessary work ethic there’s potential for conflict, and spiky American chef Ryan seems likely to make the galley a flashpoint. His philosophy: don’t give the guests a choice; just give them something they can Instagram.

Revealed: No Mercy, No Remorse
Stan, from Thursday* 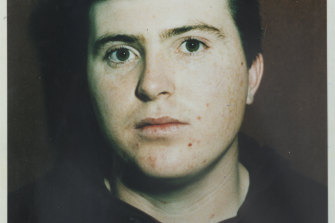 In 1993 serial killer Paul Denyer viciously murdered three young women around Frankston. Next year he could be free on parole. This compelling documentary by The Age’s veteran crime reporter John Silvester will add to pressure on the state government to legislate to keep him in prison. The documentary is all the more powerful for eschewing sensation as detectives involved recall the urgency of the investigation, and as police video shows the chilling casualness with which Denyer described the details of his crimes.

The Gospel According to Andre
DocPlay 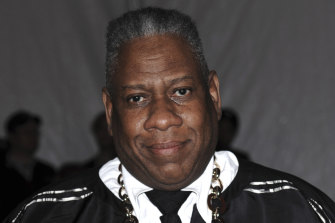 Fashion writer Andre Leon Talley is the subject of this documentary.Credit:AP/Evan Agostini

Some people knew Andre Leon Talley as one of Andy Warhol’s old crowd. Some knew him as that kaftan-wearing judge from America’s Next Top Model. Some even knew him for his decades as a writer and editor at some of the world’s biggest and most influential magazines. The most interesting aspect of this slightly over-long documentary has Talley and numerous old friends recall him growing up in the segregated South before embarking on a most unlikely career in New York. Well worth checking out.

* Stan is owned by Nine, the owner of this masthead.