The family of Brethren world leader Bruce Hales has been busy in the property market in Sydney’s north, with son Dean Hales breaking the suburb record in Epping with the $7.5 million he recently splashed out on a house there. 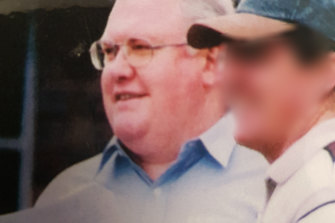 The family also owns several properties on two adjoining streets in nearby Eastwood, a handy walk from the local Plymouth Brethren Christian Church.

But here’s where things get strange. Real estate tragics trying to use Google Maps Street View to sticky-beak on the Hales’ houses – the one occupied by Bruce is among the suburb’s largest properties – will be met with a great big blurred image, kind of freaky to a digital native.

A Brethren spokesman told us that the blurring of Street View images “isn’t uncommon, it’s a provided function of Google Maps and is easy to do. It’s often done by those who prefer to maintain their security and privacy.”

Google confirmed that it provided the tools to remove images. “Each Street View image contains a link to our ‘Report a problem’ tool where users can report objectionable images,” a spokesperson said.

Good to know, but we’re not sure if the Brethren will appreciate the words “objectionable” to describe Bruce’s little patch of paradise.

Mark McGowan may be the undisputed Supreme Leader of Western Australia, but he’s sure been under pretty constant attack from conservatives across the Nullarbor.

And now, following the lead of Scott Morrison and Clive Palmer, the latest potshot has come from an angry global network of vaping advocates.

The McGowan government’s crackdown on e-cigarette sales drew an open letter from Legalise Vaping Australia, co-signed by the World Vapers Alliance and pro-vape organisations from as far afield as Congo, Poland and Nigeria, calling for the premier to back off. 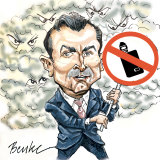 Mark McGowan versus the vapers.Credit:Joe Benke

The Australian body is an offshoot of the Australian Taxpayers’ Alliance, both run by colourful former real estate agent Brian Marlow, who signed the open letter, and has an influence on the conservative fringes of the Liberal Party.

But in the World Vapers Alliance, McGowan has made influential enemies. Despite its commitment to pushing vaping as an alternative to smoking, the body is bankrolled by one of the world’s biggest cigarette companies, British American Tobacco.

According to its website, the alliance is backed by the Consumer Choice Centre, set up by US-based libertarian activist groups founded on the dime of influential conservative industrialists Charles and David Koch.

While the alliance doesn’t receive Koch funding, it’s begged for money from the US-based billionaires in the past. Perhaps joining forces to attack McGowan might help with that.

The furore surrounding Stonnington Council bad boy Alex Lew looks set to go another round after the Liberal councillor secured a court-ordered delay to an official direction that he apologise to fellow councillor Mike Scott, after Lew was found to have failed to treat his Greens’ counterpart with “dignity, respect, fairness and courtesy”.

The apology was due to be delivered at Monday’s council meeting but is now subject to the legal action, which will return to the Supreme Court – where Lew, in a separate matter, is challenging a directive to undergo social media training after a clash with another councillor over Facebook posts.

But Lew has beaten the rap on a bullying complaint by former mayor Kate Hely, in a decision that has local government circles talking.

Former Federal Court judge Shane Marshall, who also sits on the Victorian Racing Tribunal, and former Monash Mayor Matt Evans were brought in by the council to arbitrate the kerfuffle.

The pair found that Lew’s behaviour last year toward the then mayor had been childish, aggressive, ungracious, unwise, puerile and appalling and that he had peddled false and misleading information and engaged in inappropriate character assassination.

But none of that was unreasonable in the context of the “robust” political debate gripping the council, Marshall and Evans concluded. The arbiters speculated that Lew may have been guilty of misconduct, but they had only been asked to decide if the councillor had engaged in serious misconduct.

Fair to say that Hely is not impressed.

“I cannot imagine a more disappointing and disheartening portrait of the future of local government culture if this is now precedence,” she wrote on LinkedIn.

Australian Gender Equality Council chair Coral Ross, who is a past Municipal Association of Victoria president, is also concerned.

“If this is the type of behaviour which is condoned in our council chambers then the culture will never improve and will deter women from standing for local government,” Ross told CBD.

Lew was chipper on Sunday, insisting the Greens and progressive independents were out to get him and claiming vindication.

“I will continue to speak up on behalf of the residents of Stonnington, who want the council to return its focus to rates, rubbish and roads and away from virtue signalling and woke issues,” Lew said.