Cancer survivor, 27, who thought his exhaustion and ‘itchiness’ were caused by a lads’ holiday hangover shares his horror at learning it was non-Hodgkin lymphoma

A cancer survivor has revealed how he dismissed his initial symptoms as the result of a boozy lads’ holiday.

Andrew Frost, from Burton-on-Trent, Staffordshire, had enjoyed three weeks with mates in Thailand in 2019 when he became blighted by a constant itching all over his body and overwhelming exhaustion.

Andrew, a former Army logistic supply specialist for the Royal Logistics Corp, visited his GP on his return to the UK and was given antihistamines.

But days later the then 25-year-old collapsed on the bathroom floor and was rushed to hospital where he was diagnosed with non-Hodgkin lymphoma (NHL).

After getting the all-clear, Andrew, now 27, is sharing his experience to encourage people to get any unusual symptoms checked out. 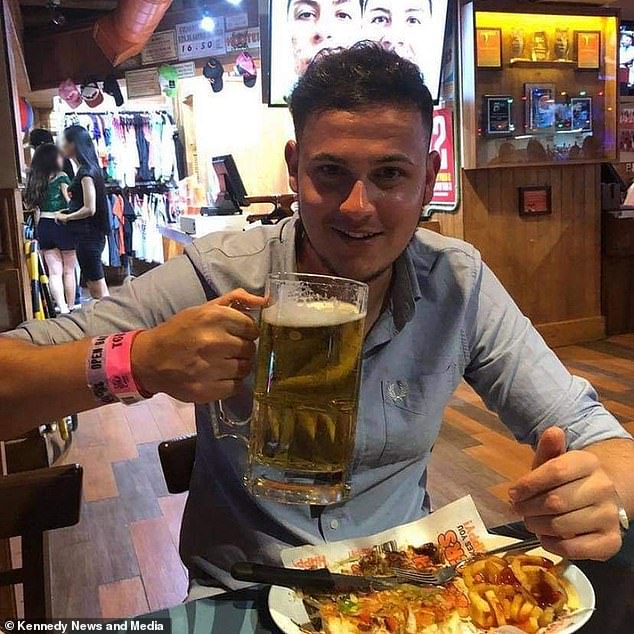 Andrew Frost, now 27, was shocked when he was diagnosed with non-Hodgkin lymphoma (NHL) after a holiday in June 2019, pictured. He thought his symptoms of itchiness and tiredness were just a hangover 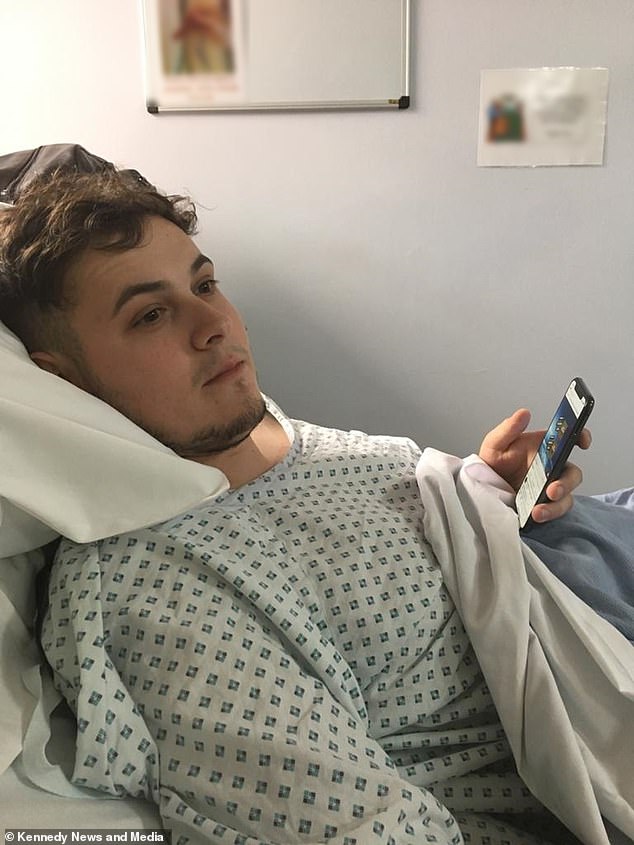 After returning in the UK, Andrew collapsed twice and was rushed to the hospital for exams. A biopsy indicated he had NHL and needed chemo (pictured in hospital after the diagnosis) 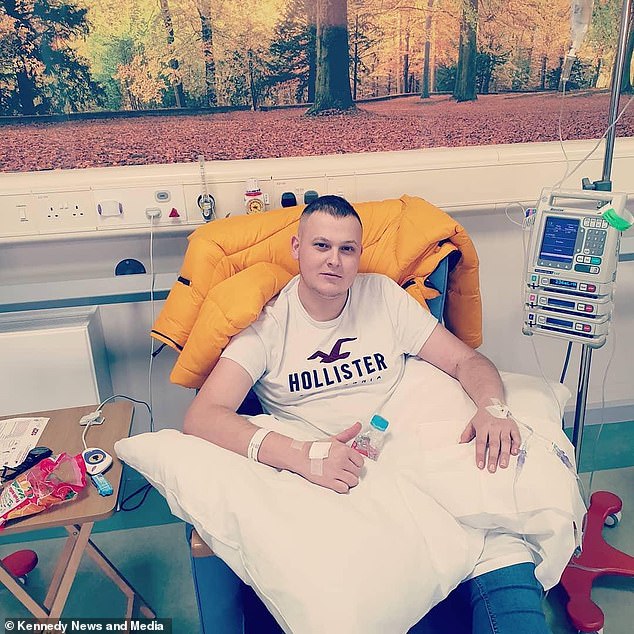 The former army logistics supply specialist for the Royal Logistics Corp went through an intense chemotherapy course, pictured to fight the disease 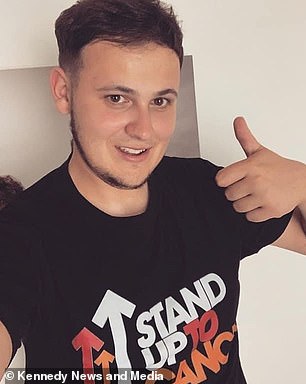 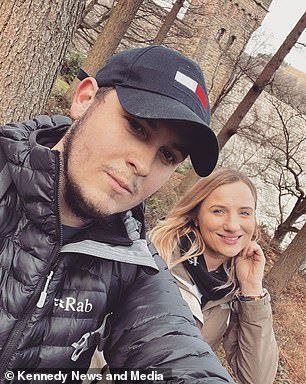 Andrew, pictured now, left and with his new girlfriend, right, is now raising awareness about cancer and lives a healthier lifestyle

Andrew said: ‘On holiday we were drinking and partying hard 24/7. There was no sunbathing, no sightseeing, it was just alcohol. It was a good holiday.

‘I had a rash on the right-hand side of my arm that was like a heat rash.

‘When we were on the plane back from Hua Hin I told the lads, who were mates from school, that I was really itchy all over my body.

‘They said there was nothing wrong with me and it was from all the alcohol I’d drunk and from being in the sun.

‘I thought that maybe I’d been bitten by a bug. I remember thinking “this isn’t right” and I slept all the way home.

‘The day I got back I fainted at home but didn’t think anything of it. I thought it was dehydration from a really bad hangover.

‘I was a bit dazzled when I came to and wondered what was going on. I thought it was dehydration so I went downstairs to drink some water but didn’t think anything of it. 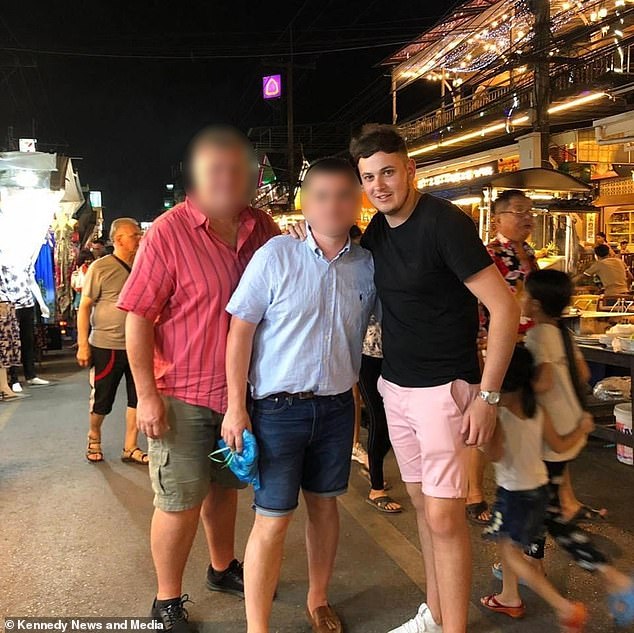 Andrew started feeling itchy and suffered from extreme tiredness on his trip to Thailand, pictured, but put it on the account of drinking too much alcohol 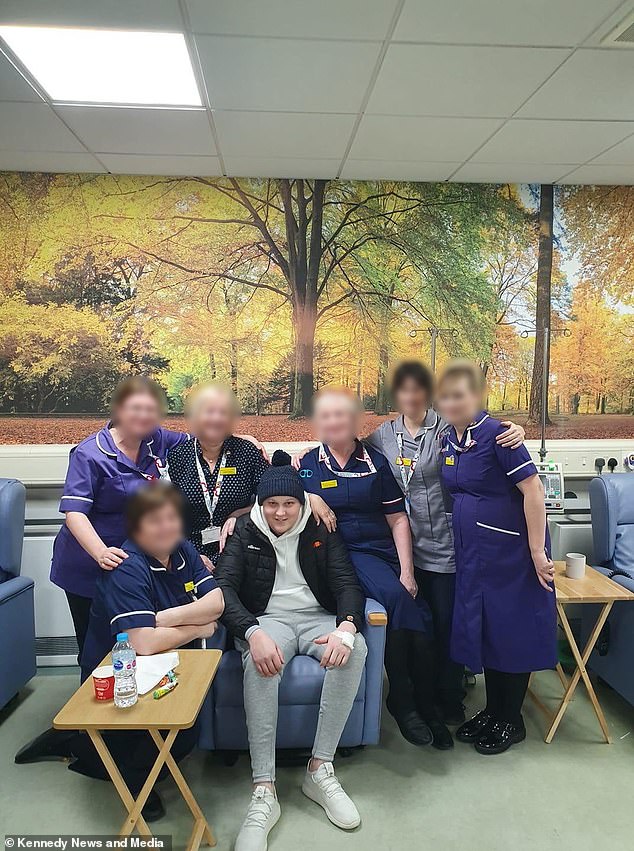 ‘Then the itchiness got even worse, it was a constant itching that drove me mad, I couldn’t concentrate on anything.

‘I couldn’t see a rash, I could just feel it on the back of my arm.

‘I spoke to my friends again and they suggested that maybe I should see a doctor, which I did three days later. He told me to take some antihistamine tablets to reduce the rash. He thought it was an allergic reaction from drinking.’ 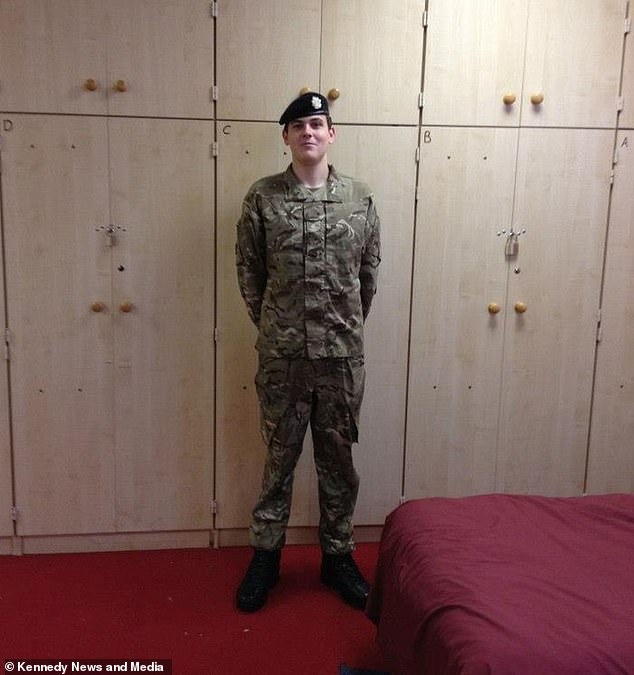 Andrew, pictured in uniform, worked as a former logistics supply specialist for the Royal Logistic corps 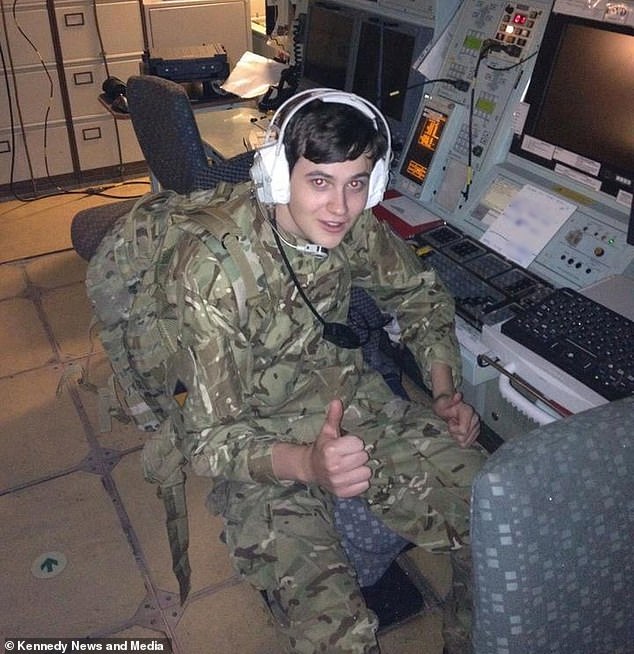 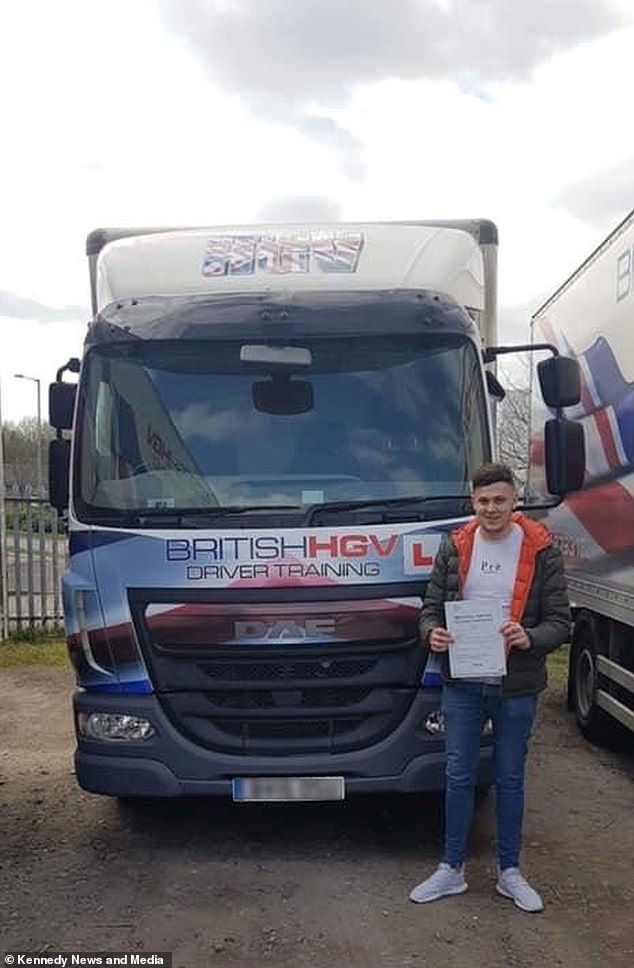 After leaving the army, The Brit qualified as an HGV driver, meaning he can now drive lorries and large vehicles

After returning home from his holiday in June 2019 Andrew took antihistamines as suggested by the doctor, but his symptoms persisted.

HGV driver Andrew was rushed to Queen’s Hospital in Burton where doctors ran blood tests and a chest x-ray.

Six weeks later after undergoing a neck biopsy Andrew was told the devastating news he had NHL.

Andrew said: ‘I took the antihistamine tablets for two days and then at 1am I went to the toilet and I hit the floor and was frozen, I couldn’t do anything.

‘My dad came running in to see what was up with me and called for an ambulance. 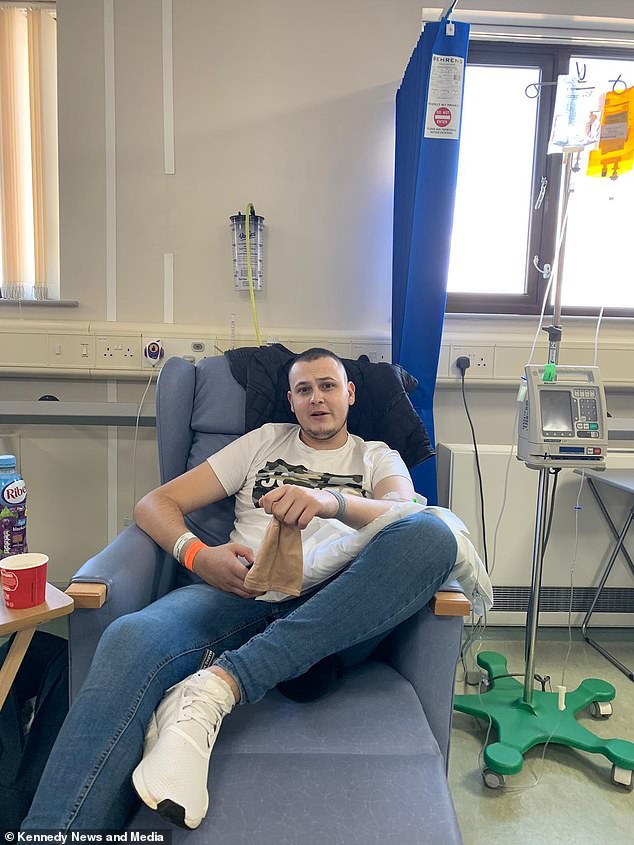 Andrew in hospital during treatment. The 27-year-old was told he could have lung cancer before he was diagnosed with NHL

Lymphoma is a cancer of the lymph nodes, which is the body’s disease-fighting network.

That network consists of the spleen, bone marrow, lymph nodes and thymus gland.

Non-Hodgkin lymphoma can occur anywhere in the body but is usually first noticed in the lymph nodes around sufferers’ necks.

Non-Hodgkin’s lymphoma affects around 13,700 new people every year in the UK. In the US, more than 74,600 people are diagnosed annually.

It is more common in males than females, and it is commonly diagnosed either in a patient’s early 20s or after the age of 55.

Survival can vary widely with NHL.

The general survival rate for five years is 70 percent, and the chance of living 10 years is approximately 60 percent.

It depends on the number and locations of the body affected by Non-Hodgkin lymphoma.

‘They took me to hospital and did lots of blood tests – my heart, kidney, liver and everything came back perfect.

‘The doctors were amazed by what was up with me and said they were going to run an x-ray on my chest.

‘They found a 10cm dark black shadow across my chest. Having good results from the other tests made me think it was nothing.’

Initially doctors thought Andrew had lung cancer, but a biopsy confirmed it was NHL – a cancer of the lymphatic system.

Andrew said: ‘The consultant asked me to go in for another x-ray and after that I was taken into a room where I was told it could be lung cancer. 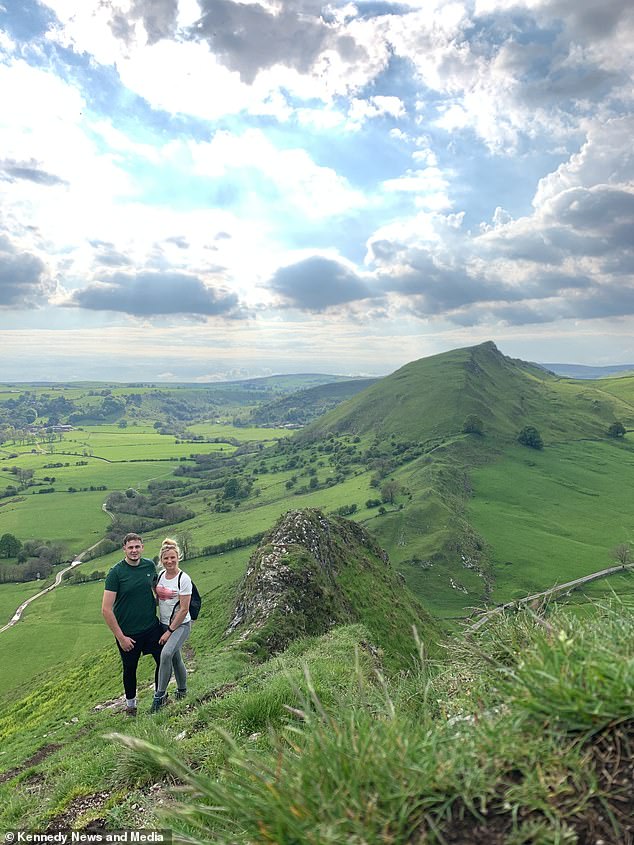 Instead of boozy holidays, Andrew now goes on hike with Indres, pictured, and regularly goes to the gym

‘It’s the worst thing you can hear and it was a massive shock. I went white and passed out.

‘They needed to use a wheelchair to push me around the hospital as I kept shaking. I said to the doctor “no it can’t be that, no chance”.

‘Despite not having any visible lumps or bumps they did a biopsy on the right side of my neck and two weeks later they said it was NHL.

‘I didn’t know anything about it but then I met my cancer nurse who talked me through everything, she was amazing.”

After being diagnosed with stage 2a NHL, in his chest and neck, Andrew underwent a gruelling three-month course of chemo starting in August 2019. 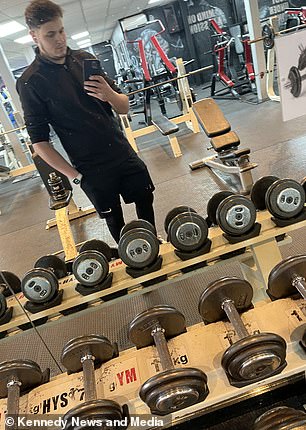 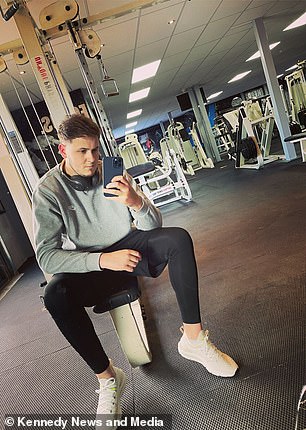 Hitting the gym! Andrew completely changed his lifestyle after recovering from NHL in 2019 and now exercises regularly, pictured

The diagnosis came just months after his beloved gran Jean Warson died after a 20-year battle with stomach cancer.

Andrew said: ‘My gran passed away from cancer in 2019, she was battling it for 20 years and that was the hardest thing for the family.

‘I had chemo every two weeks for three months. I got lucky that I didn’t need any radiotherapy and I beat it really soon, perhaps because of my age.

‘I found chemo easier than a lot of people. It made me really tired, pretty grumpy and very hungry so I put on a lot of weight. I wasn’t sick but I did lose my hair on the last treatment.

‘I got the all-clear in November.’

The active duo regularly go hiking and mountain climbing and, wanting to give back to the nurses who helped his gran, Andrew has decided to do a sponsored 26-mile hike for Macmillan Cancer Support.

Andrew said: ‘Exercise helped me a lot. When I finished treatment I met my girlfriend and we did a lot of mountain climbing and hiking around the Peak District. She motivated me.

‘When I was having treatment I was a bit of a slob, I’d given up [on exercise]. But she pushed me to do everything and really motivated me.

‘Now I play golf too and I want to get into kayaking.

‘The Macmillan nurses were always good with my gran and I just wanted to give something back.’

Now Andrew is urging anyone with unusual symptoms to get them checked out.

Andrew said: ‘I’ve had friends saying they feel itchy and tired and I’ve said to always get it checked.

‘I just thought it was nothing and it turned out to be NHL.’

You can donate to Andrew’s page here. 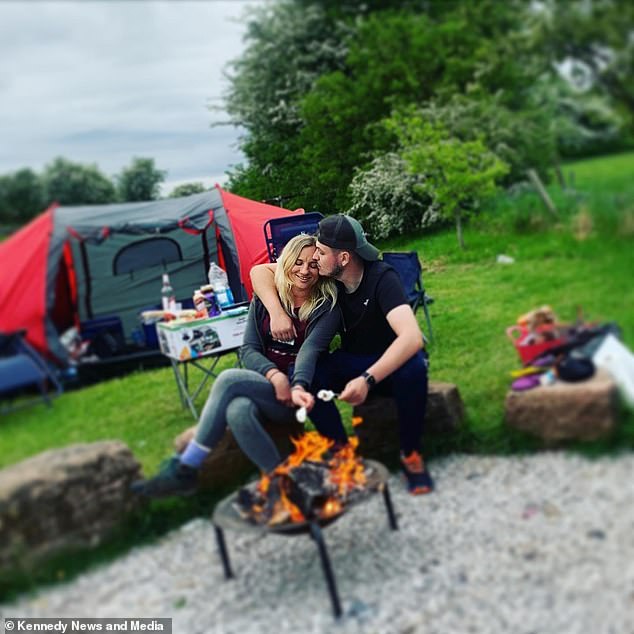 Indre and Andrew, pictured camping. The survivor now wants to do a sponsored 26-mile hike for Macmillan Cancer Support to give back 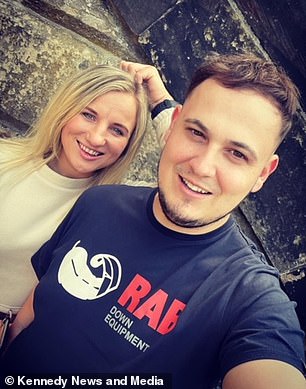 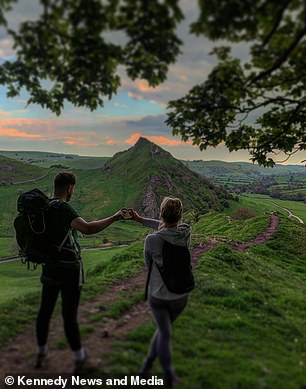 The dynamic duo together, left and on a hike, right. Andrew wants to give back to the nurses who helped his and his grandmother, who battled with cancer for 20 years before passing away in 2019 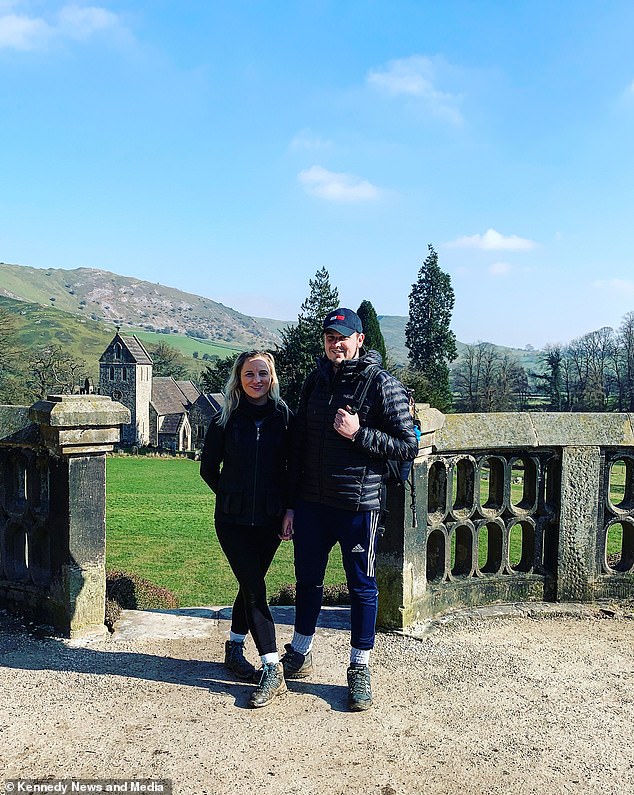 Indre and Andrew now. The former army logistics staff admitted he passed out when he heard he had cancer 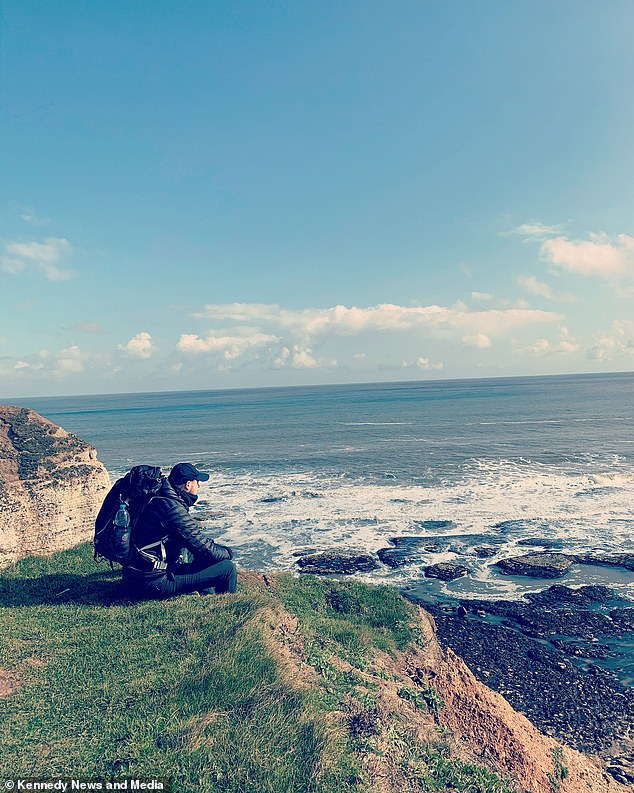 Reflecting. Andrew said he became a bit of a ‘slob’ during his cancer treatment but Indre motivated him to get back into exercising 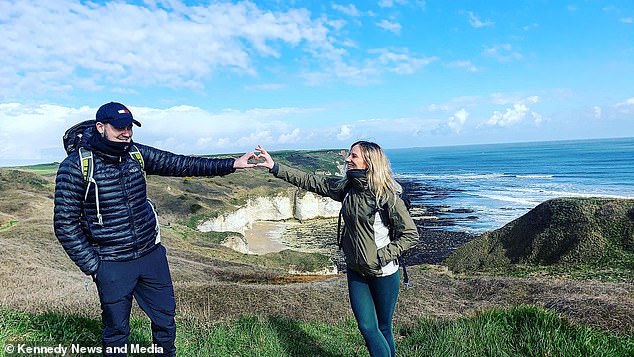 The couple pictured on a hike. Andrew said he was lucky because he recovered from the cancer soon and only did one course of chemo 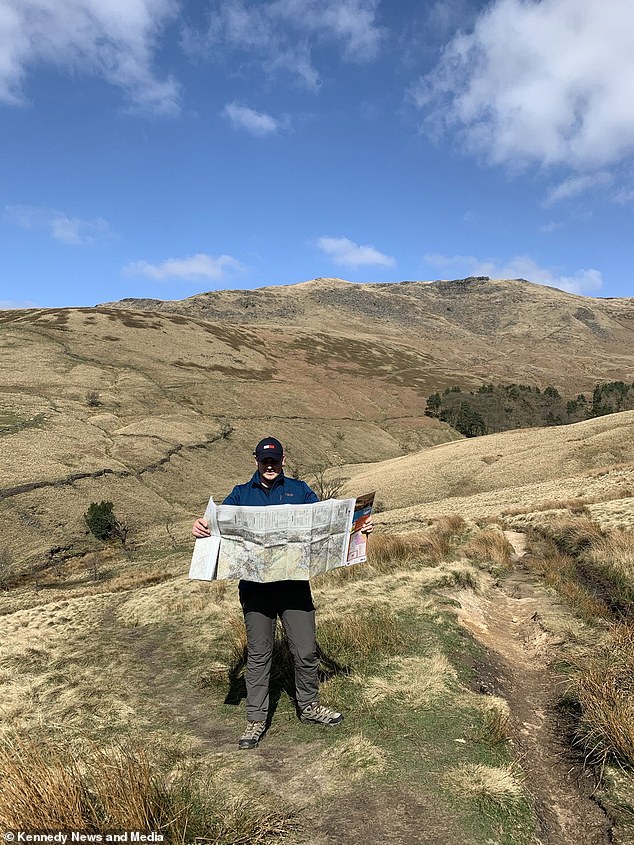 Looking for directions during a hike. The 27-year-old said he was more into sports than ever and looking forward to give back to the people who helped him during his treatment