Sydneysiders fortunate enough to be near the coast during these tight times of COVID-19 curbs can at least get some solace from scanning the horizon for whales.

And if they get really lucky, they might even spy a pygmy blue whale – if they know what to look for. 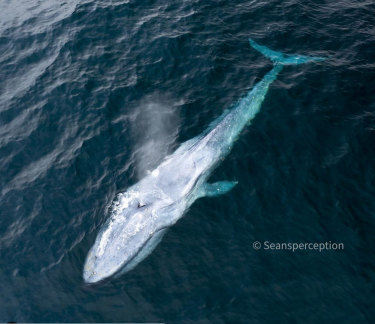 A pygmy blue whale tracked off Maroubra in 2020.Credit:Sean Keenan

“Blue whales are elusive,” said Vanessa Pirotta, from Macquarie University’s marine predator research group, who spotted one of the giant mammals off Maroubra in July 2013 and has written up sightings of two others in August and September last year in the Australian Zoologist journal. “We’re literally able to see the biggest animal in the world on Sydney’s backdoor step.”

Australia has two of the five blue whale species in its waters – the so-called true or Antarctic blue and the pygmy blue. Relatively little is known of the pygmy blue, which is why confirmed sightings like those last year warrant research reports.

Blue whales have made a much slower recovery from whaling than, say, humpbacks, which have probably restored their original numbers. According to the Australian Zoologist, the pre-whaling Antarctic blue whale population was estimated to be 202,000-311,000, but whaling cut the population to as few as 360 individuals.

Pygmy blue whales were only identified as a separate species in the 1960s, leaving their pre- and post-whaling abundance and population trends highly uncertain, Dr Pirotta and co-author and Macquarie University colleague Robert Harcourt write.

Pygmy blues are hardly midget mammals, of course. They may be dwarfed by Antarctic blues – which can weigh as much as 200 tonnes and measure 33 metres – but their own scale is anything but puny at 90 tonnes and 27 metres for adults.

Pygmy blue whales are known to travel from southern Australian waters along the west coast to reach Indonesia but confirmed sightings are rare along the east coast.

The paper counts just six verified sightings off Sydney in the past 18 years, including Dr Pirotta’s own viewing from Cape Solander.

“Opportunistic sightings of blue whales contribute to our understanding of blue whale presence in Australian waters,” the scientists write, noting the reports may benefit both research but also efforts to protect the endangered animals.

Of the two sightings in 2020, the first individual was heading north when it was spotted on August 16. Four weeks later, the same drone operator recorded a pygmy blue whale that was considered to be a second individual because it was thinner and had visible “cookie cutter” shark marks along its body.

Since Sydney’s horizon scanners are likely to be land-bound for a while yet, the thing to watch for is the height of the “blow”. The spray from pygmy blues is typically straight and tall and can reach as much as 10 metres high, Dr Pirotta said.

Humpback blows, meanwhile, are “bushy” while those from southern right whales can form a “love-heart” shape, she said.