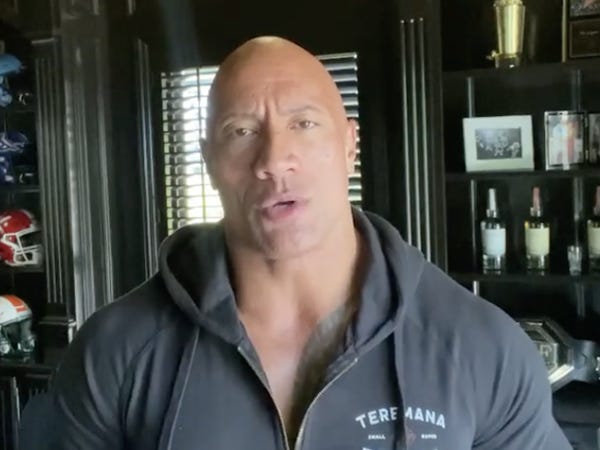 Dwayne "The Rock" Johnson has revealed that he and his family have all tested positive for COVID-19.

Speaking in an emotional Instagram video on Wednesday, the 48-year-old wrestler-turned-actor also slammed politicians who had encouraged the public not to wear masks.

"My wife Lauren, as well as my two baby girls, as well as myself, we have all tested positive for COVID-19," he said. Johnson's daughters, Jasmine and Tiana, are two and four years old respectively.

"I can tell you that this has been one of the most challenging and difficult things we have ever had to endure as a family.

"And for me personally too, as well. And I've gone through some doozies in the past. I've got knocked about and got my ass kicked a little bit in the past with some challenges, but testing positive for COVID-19 is much different than overcoming nasty injuries, or being evicted or even being broke, which I have been more than a few times.

"The reason why I feel like this is different is because my number one priority is to always protect my family."

Stay disciplined. Boost your immune system. Commit to wellness. Wear your mask. Protect your family. Be strict about having people over your house or gatherings. Stay positive. And care for your fellow human beings. Stay healthy, my friends. DJ 🖤 #controlthecontrollables

Johnson, who says he and his family contracted the virus about two-and-a-half weeks ago from family friends, went on to encourage fans to start living a healthier lifestyle to improve their chances of tackling the illness.

He also said wearing a mask was imperative, at which point he took aim at politicians who had suggested otherwise.

United States President Donald Trump previously said in April that wearing a mask is "voluntary," according to NBC News, while Vice President Mike Pence said in March that "unless you are ill, you have no need to buy a mask."

"Wear your mask," said Johnson. "It baffles me that some people out there, including some politicians, will take this idea of wearing masks and make it part of a political agenda.

"It has nothing to do with politics. Wear your mask. It is a fact. And it is the right thing to do, not only for yourself, but for your family and your loved ones, and also for your fellow human beings."