So this time, Brian May played a guitar solo on a levitating asteroid. Comets whizzed around his star-spangled blouse. Planets circled his enormous poodle hair. Multicoloured lasers sliced the sky, droplets of real rain dancing like diamonds.

Hell of a solo, too. Long, fluid, melodic, drenched in effects and unmistakably Brian. But it's the asteroid we’ll remember. So goes the incremental transformation of Queen from flesh-and-blood rock group to jaw-dropping virtual theme park for the ages. 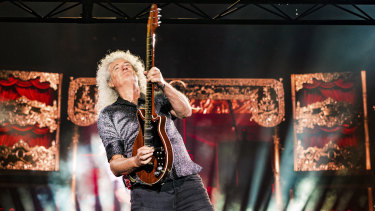 Queen’s Brian May in action at AAMI Park.Credit:Rick Clifford

This is May and drummer Roger Taylor's third visit with the highly capable Adam Lambert subbing for the "irreplaceable" (his word) Freddie Mercury.

Their strategic evolution from band interrupted to hit stage musical to smash family biopic has ensured a doubling of their audience since Rod Laver in 2014.

The songs – about 30 that rugged-up grannies and plastic-wrapped children alike knew well enough to bawl into the intermittent drizzle – remain the same. For some of us, I Want To Break Free feels like a laboured contractual commitment. For others, In the Lap of the Gods and Taylor’s I’m In Love With My Car are gloriously unexpected highs.

On Bohemian Rhapsody – part video flashback, part theatrical re-enactment, all note-perfect delirium – we all agree, with fists and tonsils at full flex. Without Under Pressure, Radio Ga Ga or the encore of We Will Rock You/ We Are the Champions, nobody here would get out alive. 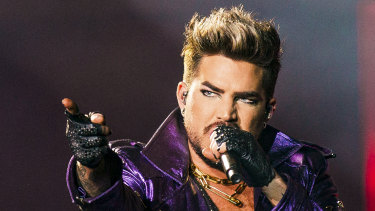 Lambert has grown more comfortable since 2014. He can sing Freddie and then some, but he’s less inclined to over-warble. The vital flamboyance is tempered by expert stagecraft and genuine gratitude to have landed pop’s ultimate part.

May and Taylor, the "two living legends" on stage (Lambert again), perform their anchoring roles with almost apologetic modesty, keenly aware that this monumental legacy is far beyond any mortal design. An electrifying homage to Led Zeppelin and Elvis Presley threw that story into deeper perspective.

Neither of those dinosaurs, sadly, knew the dimensions of staging that bring motorcycles spiralling from the ground, or the breathtaking calibre of digital enhancement that makes riding an asteroid as easy as playing guitar, as thousands raise their phones to take a video of a video of Freddie Mercury miraculously reborn on a blimp-sized TV.

It’s fair to assume such spectacles would be diminished without the actual living Brian May somewhere in there, pulling actual strings. But deep inside Queen’s strategic development division, plans are doubtless afoot to cross that bridge without breaking stride.