Dame Edna Everage didn't shy away from the Barry Humphries-shaped elephant in the room on Wednesday as she launched her third "final" tour of Australia, which starts next week in Canberra.

With her name up in lights at The Langham in Sydney, a sparkle behind her rhinestone-embossed glasses and her tongue firmly in cheek, "the original housewife of Melbourne" Dame Edna said reports of her retirement had been grossly exaggerated, and made light of controversy her alter ego Humphries caused in 2018, when he made offensive comments about the transgender community. 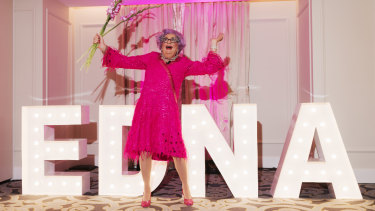 "I am back by popular demand. I'm not doing it for the money – I have a little put away. I'm doing it for the love and I am going to show I've still got what it takes possums," she said. Her show Dame Edna: My Gorgeous Life will take her to places she's never been before, like Rooty Hill in suburban Sydney, and issues she's never touched before, like the #MeToo movement.

Although she would not be drawn on the exact content of the show, one thing she was clear about: distancing herself from that "failed actor and attention seeker" Humphries, "that leech that tortured me for so long".

"My relationship with him is pretty non-existent, he plays no part in my life," she said of her 85-year-old nemesis. "He once pretended to be my manager but frankly show business is not his field… I am in litigation with him for serious embezzlement." 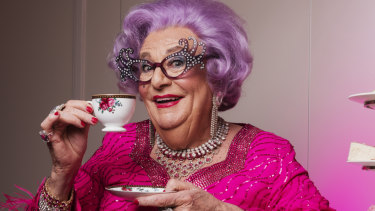 She commended the Melbourne International Comedy Festival’s decision earlier this year to rename its top gong, the prestigious Barry Award, after Humphries called "transgenderism" a "fashion".

"I think it's a wise decision – no one remembers him anyway," she said of renaming the award.

"It might be on my advice he had the award taken away from him – I hear there might be an Edna award, they were just waiting for the flack to die down before they announced it," she added in a stage whisper.

She knew Humphries caused outrage in the LGBTQI community, particularly to comedian Hannah Gadsby who called him irrelevant and inhumane at the time.

"[Humphries] may be out of touch, but I certainly have my finger on the pulse – don't link him with me," she cautioned.

In attempt to save her beloved brand "Edna" she advised Humphries he should stick to his other talents rather than humour. "He's a very good landscape painter, with paintings for sale at Philip Bacon Gallery in Brisbane," she said.

"Barry Humphries is still the person who created Dame Edna, trying to distance herself from that doesn't excuse it," Ms Goldner said. "If this had been a racist comment people would have jumped on him, if he thinks he can use trans people for publicity it shows his contempt for us."

On less controversial topics, Dame Edna shared her views from the personal (her "affair" with Meghan Markle's father, Thomas Markle) to the political; Brexit, Boris Johnson, and the current Australian Prime Minister ("Who is he again?").

"I knew Donald Trump when he was a young ambitious man showing off a model of his new Trump Tower. I told him: 'I love to see a man caressing his erection' … please don't read something horrible into that," she said, with a final flourish that left the high-morning-tea crowd laughing, as she winked and exited stage left.

The Dame Edna: My Gorgeous Life national tour kicks off in Canberra on September 17. Check tegdainty.com for tickets and full details.

Duncan Bannatyne opens up on saving someone’s life: ‘I have first aid training, I ran along to see if I could help’
Recent Posts
We and our partners use cookies on this site to improve our service, perform analytics, personalize advertising, measure advertising performance, and remember website preferences.Ok