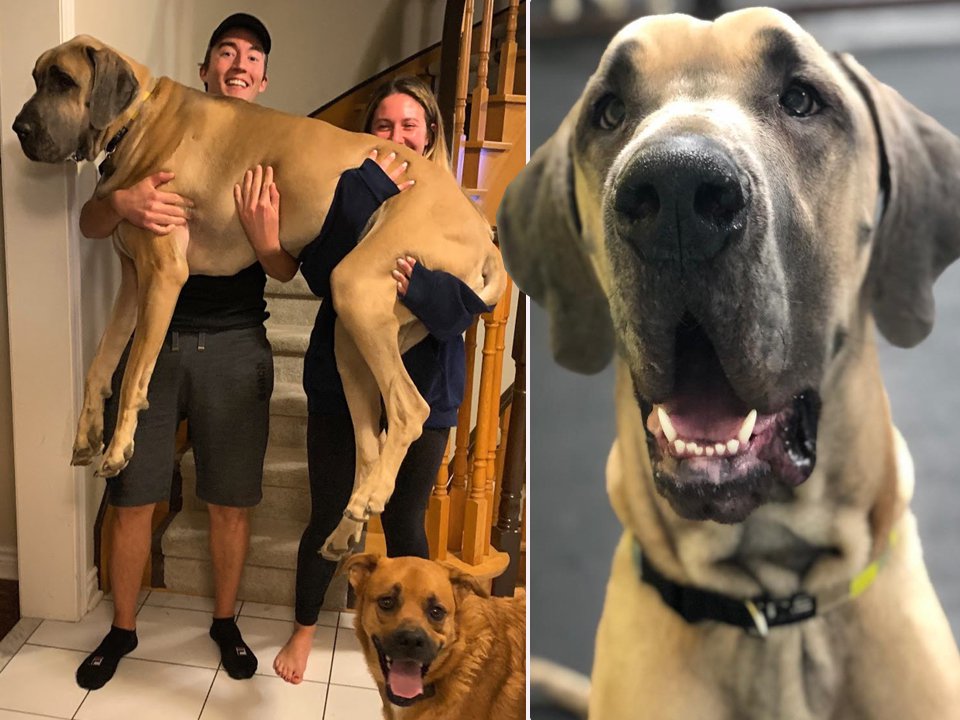 Massive Great Dane Brewski was meant to be a guard dog, but his family say he’s scared of everything from socks to pieces of broccoli.

The pair originally got him in the hope he’d make for a good guard dog, but he grew up to be more like fellow Great Dane Scooby-Doo.

Chris and Wylie got Brewski when he was just seven weeks old and, even though he may not have grown into the guard dog they’d hoped for, he certainly looks the part.

Chris, who’s from Ontario, Canada, said: ‘When he puts his paws on my shoulders we’re the same height.

‘He was tiny when we first got him.

‘He weighed about 15 pounds, but he started growing fast.’

Even though Brewski weighs two stone more than firefighter Chris, the big guy is afraid of everything from small animals to sticks of celery.

Chris said: ‘We did want a guard dog, we knew what we were getting ourselves into and we wanted a big dog.

‘He’s actually just a scaredy-cat and he’s super sweet, but it wasn’t what we expected.

‘He’s scared of everything, he’s scared of candy wrappers and he’s really scared of backing out of small places, if he gets stuck anywhere and has to back up, he doesn’t like it.

‘He’s terrified of the fire alarm.

‘He’s scared of everything, there’s too many things to list.

‘He’s good with other dogs but small animals he doesn’t like. It is very funny.

‘He thinks he’s a lapdog, he tries to sit on our laps and it can take the breath out of you.’