Attorney-General Christian Porter has launched Federal Court defamation proceedings against the ABC over an online article that he alleges portrays him as the perpetrator of a “brutal” rape that contributed to a woman taking her own life.

The lawsuit is expected to put an end to calls for a public inquiry into his fitness to remain in office because a trial would ventilate many of the same issues before a judge, and involve the same witnesses. 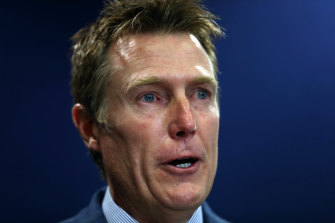 Attorney-General Christian Porter is expected to give evidence in the proceedings.Credit:Trevor Collens

In a statement of claim filed on Monday, lawyers for Mr Porter, who is on medical leave, seek damages, including aggravated damages, for a February 26 article published on the ABC’s website, headlined “Scott Morrison, senators and AFP told of historical rape allegation against Cabinet Minister”.

ABC journalist Louise Milligan, who broke the story, is also named as a party to the lawsuit.

Mr Porter, who is not named in the ABC article, has retained a trio of high-powered lawyers, including Sydney barristers Bret Walker, SC, and Sue Chrysanthou, SC, and solicitor Rebekah Giles.

“Over the last few weeks, the Attorney-General has been subjected to trial by media without regard to the presumption of innocence or the rules of evidence and without any proper disclosure of the material said to support the untrue allegations,” Ms Giles said in a statement on Monday.

“The trial by media should now end with the commencement of these proceedings.”

Ms Giles said “the claims made by the ABC and Ms Milligan will be determined in a court in a procedurally fair process”.

She foreshadowed that Mr Porter would give evidence in the proceedings.

Ms Chrysanthou and Ms Giles have acted successfully for a series of high-profile defamation plaintiffs, many of them women, including Greens Senator Sarah Hanson-Young against former Liberal Democratic Party senator David Leyonhjelm.

The statement of claim alleges the ABC article conveys a series of false and defamatory claims about Mr Porter, including that he “brutally raped a 16-year-old girl in 1988″, when he was 17, and that this contributed to her taking her own life.

They say the article also conveys that Mr Porter was “reasonably suspected by police” of rape, warranting criminal charges being brought against him, and there were “reasonable grounds for suspecting” both that he committed the crime and that it “contributed to [the woman] taking her own life”.

Mr Porter has strenuously denied allegations made by a woman that he raped her during a debating tournament in Sydney in 1988. The woman took her own life last year, after telling NSW Police that she did not wish to pursue her complaint.

Mr Porter’s lawyers say the Attorney-General was readily identifiable as the unnamed cabinet minister in the ABC’s online story, and his name was “trending prominently on Twitter” after it was published.

He was “obliged” to identify himself on March 3, they say.

The statement of claim says factors that supported the identification of Mr Porter as the subject of the report included a Four Corners broadcast in November last year that presented Mr Porter as “a sexist and misogynist”.

The lawyers also say that only six male members of cabinet were about the same age as the woman in 1988 and, of those, only Mr Porter and two others were senior cabinet ministers. A photo caption in the article said the allegation involved a senior minister.

On the day the article was published, visits to Mr Porter’s Facebook page and website “increased significantly”, the statement of claim says.

Mr Porter’s lawyers argue the ABC and Milligan should pay aggravated damages, which are awarded in cases where a party’s conduct is considered “improper, unjustifiable or lacking in bona fides”, because they knew Mr Porter was readily identifiable as the subject of the article and “would ultimately be compelled to publicly respond”.

They say the ABC and Milligan also knew the allegations “could never be proved in any criminal or civil proceeding” but proceeded anyway “to ensure that he was publicly condemned and disgraced in the absence of any finding against him”.

Ms Giles, principal director of law firm Company (Giles), said that “if the ABC and Ms Milligan wish to argue the truth of the allegations, they can do so in these proceedings”.

The ABC will file a defence to the proceedings at a later date. It is not yet known if the broadcaster will seek to rely on the defence of truth, which would effectively result in a rape trial being held in the context of a civil case.

In defamation cases, the standard of proof is the balance of probabilities, rather than the higher criminal standard of beyond reasonable doubt, but it is still a high bar when the allegations are serious.

As is common in many cases involving media outlets, it is likely the ABC will argue the article does not convey the very serious imputations of guilt or suspicion alleged by Mr Porter, but that it reported he was the subject of an allegation.

The judge is the final arbiter of what a publication says.

In recent days, two-thirds of Mr Porter’s legal team – Ms Chrysanthou and Ms Giles – acted for former Liberal staffer Brittany Higgins, who has alleged she was raped by a former staffer in the office of Defence Minister Linda Reynolds.

Senator Reynolds apologised unreservedly to Ms Higgins last week and agreed to pay damages after being caught out telling staff Ms Higgins was a “lying cow”.

Senator Reynolds, who is on medical leave, has maintained she did not make the comment about the rape allegation but Ms Higgins’ account of her handling of the complaint.

Ms Chrysanthou also acted for actor Geoffrey Rush in his successful defamation suit against The Daily Telegraph, which resulted in a record $2.9 million payout.