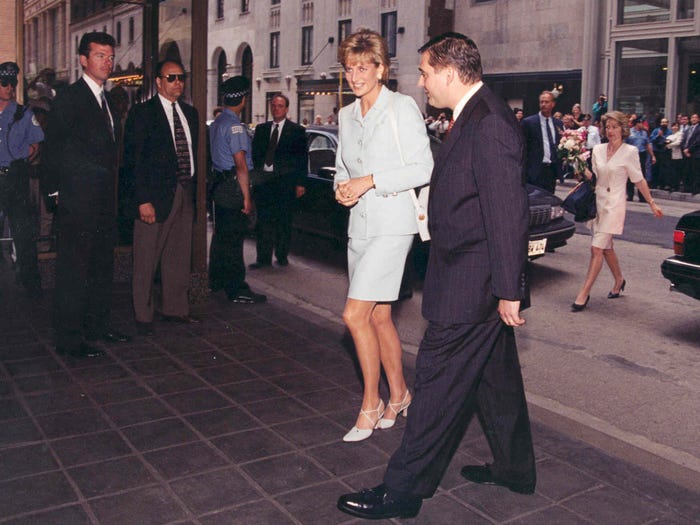 With the new season of "The Crown" airing, fans of all things royal have a lot to look forward to this week. But if you're looking to splurge on a little royal treatment of your own, the Drake Hotel in Chicago is offering a Princess Diana-inspired package, including a stay in the suite where the princess herself once slept.

With the new "Crowning a Lady" package, guests will get to experience the hotel exactly as Princess Diana did during her first and only visit to Chicago in 1996. The package includes accommodations in the Princess Diana Suite (once the Presidential Suite, but promptly renamed following her visit) as well as the items she specially requested for her stay.

Guests will find a stationary bike and mineral water in the suite, just like she had, along with forget-me-nots, her favorite flower; the official photo book of Abba, her favorite band; and a bottle of Quelques Fleurs by Houbigant Paris, her favorite perfume. And since this package was launched to commemorate Princess Diana's appearance on the new season of "The Crown," the suite will be equipped with perfect binge-watching conditions.

But the royal treatment doesn't stop at the suite. Guests booking the "Crowning a Lady" package will also enjoy afternoon tea service at the Palm Court, just like Princess Diana did, and even Rose Pouchong, her favorite tea. Later in the evening, guests will be treated to a three-course dinner that includes a fresh salad, king salmon, and a cinnamon biscotti soufflé, which is — you guessed it — exactly what Princess Diana ate during her stay at the hotel. To top off the entire experience, guests will receive white-glove service to view the original and authentic signature from Princess Diana in the official Drake autograph book.

The "Crowning a Lady" package is available now through December 15, with the rate for a minimum two-night stay starting at $32,000. If that royal budget is a bit out of reach, the Drake Hotel recommends experiencing its centurion holiday afternoon tea service, which begins December 3 and is equally fit for a queen.