The real No. 1 Lady Detective: Cheating husbands, errant wives – Maud West exposed them all. Now a new book reveals she was willing to seduce suspects of both sexes to crack a case

Staked out in the dark, noisy depths of a London nightclub, detective Maud West was trying to entrap a woman accused of blackmailing the youngest son of a well-known family, who claimed she had been ‘compromised’ by him.

But when the detective attempted to gain her target’s confidence, she was rebuffed. ‘Evidently,’ Maud wrote, ‘she did not care for the society of women.’

So, after rummaging through her box of disguises at home, she returned to the venue dressed as a man of seemingly unlimited wealth. The woman soon latched on to her as a potential new victim.

Maud played along. ‘After having had a lot to drink, I kissed her,’ she confessed. ‘Being a detective has its dark side.’ 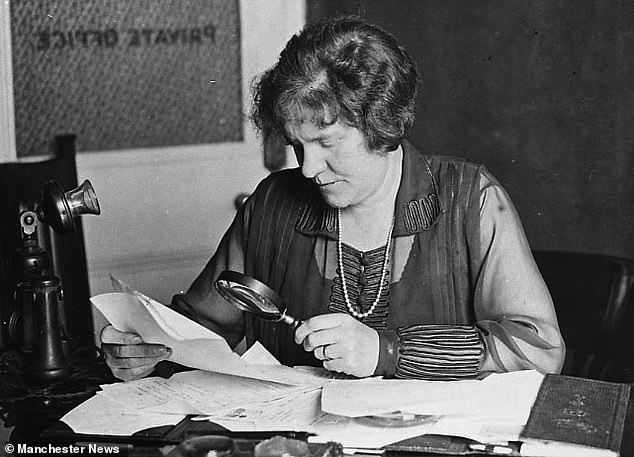 Susannah Stapleton recounts the life of Edwardian detective Maud West who would unmask blackmailers, adulterers and foil robberies in a new book

The bizarre episode ended with Maud going back to the woman’s flat, whipping off her wig and retrieving the evidence against her client. ‘The last glimpse I had of her,’ she recalled, ‘was that of a dejected figure seated on the bed, her furious glances in amusing contrast to the “vamping” [flirting] I had had to undergo in the taxi.’

As I found out while researching for my book, The Adventures Of Maud West, Lady Detective, all this happened in the Edwardian era, when Maud wrote openly about her bold tactics in magazine and newspaper articles, seemingly oblivious to the embarrassment it may have caused her husband and father of her six children, Harry Elliott. Armed with a revolver and a selection of ingenious disguises, she successfully unmasked blackmailers, caught adulterers and foiled jewel thieves — a real-life female Sherlock Holmes.

But who was this unusual woman, and how did she embark on a life of crime-solving?

The daughter of a domestic servant in Deptford, South London, she was an independent-spirited young woman, who ran away from home in 1899, aged 20, to marry her sweetheart, Harry.

When Maud’s uncle, a solicitor, offered to pay her to help him solve a robbery by posing as a maid, she didn’t hesitate.

It was certainly an unusual request, but she jumped at it — out of a sense of adventure, and because her husband was unwell and they needed the money.

It was the beginning of a lucrative and exciting double life.

Summer garden parties, when the guests were outside, meant that houses were an easy target for thieves. Maud was employed every year to attend these events with a dozen assistants dressed as maids, who served tea while keeping an eye on nimble-fingered guests.

Matters of the heart also kept Maud busy. Gathering evidence of adultery for divorce cases took her all over Europe. ‘In shadowing one lady,’ she said in 1915, ‘I had to travel to Berlin, Paris, Moscow, Ostend and back to London in the same week.’ 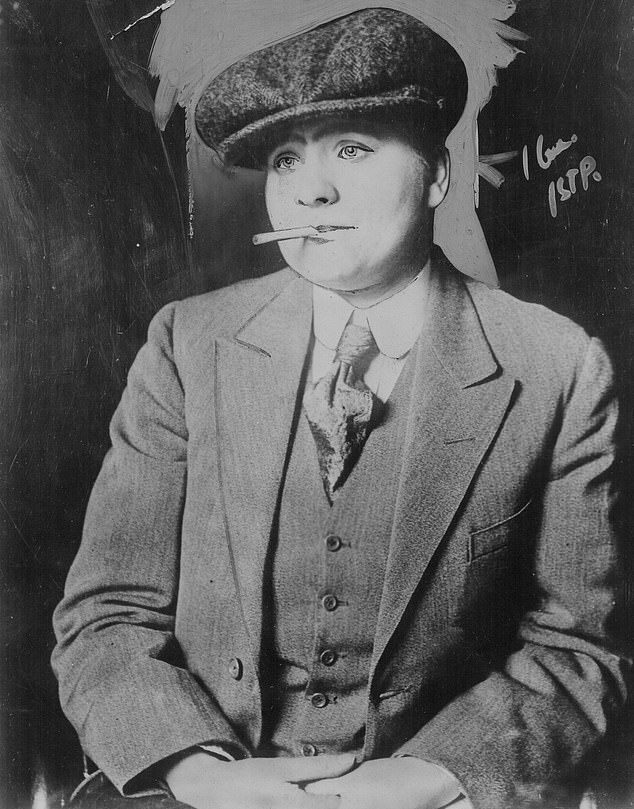 In one of her cases, the worried parents of a woman who was engaged to an Army officer asked her to investigate his background. Their fears proved justified, with Maud’s inquiries revealing him to be ‘one of the greatest blackguards I have ever encountered in my career, and I have known some bad ones indeed’.

Not only had the officer left his regiment in disgrace, and turned his hand to blackmail and swindling, he’d been married before, to a governess. He had then taken all her money and left her.

The conman himself made an unexpected appearance at Maud’s office one evening. She immediately knew he meant trouble, and discreetly reached for her revolver.

She wrote: ‘How dare you come into my private office like this?’

‘I have just come to tell you,’ he said, ‘that it is not safe for anyone — a girl especially — to go fooling around making inquiries about a man like me.’

‘I have found out quite enough about you,’ I said, ‘to stop all chance of your being able to marry Miss—.’ His face went white; he raised his fist and made a quick step towards me, and then I brought the revolver to bear point-blank on his temple, and he stopped.

‘You are an infernal coward!’ I said. I was in such a rage that I could almost have shot him.

She wrote in later years: ‘I never doubted the efficiency of a small but very useful revolver, or a certain dress ornament which contained a tiny but spiteful stiletto.

‘Furthermore, I always carried on a bangle two detachable beads composed of a soluble narcotic. With these I could promptly dope the drink of any too embarrassing suitor. On one occasion only did I find it necessary to lose one of my bangle beads.’

Often, though, her disguise was minimal. ‘Generally, I start off as myself because few wrong-doers suspect a middle-aged woman to be on their tracks.’ Even in her younger days she admitted that ‘most of my success as a detective is due to the fact that I do not look like one’.

However gung-ho Maud’s accounts, such incidents were potentially highly dangerous, with physical attacks — or the threat of them — part and parcel of the job. ‘To be shot at in the street is something for which one must be prepared,’ she declared in 1926. 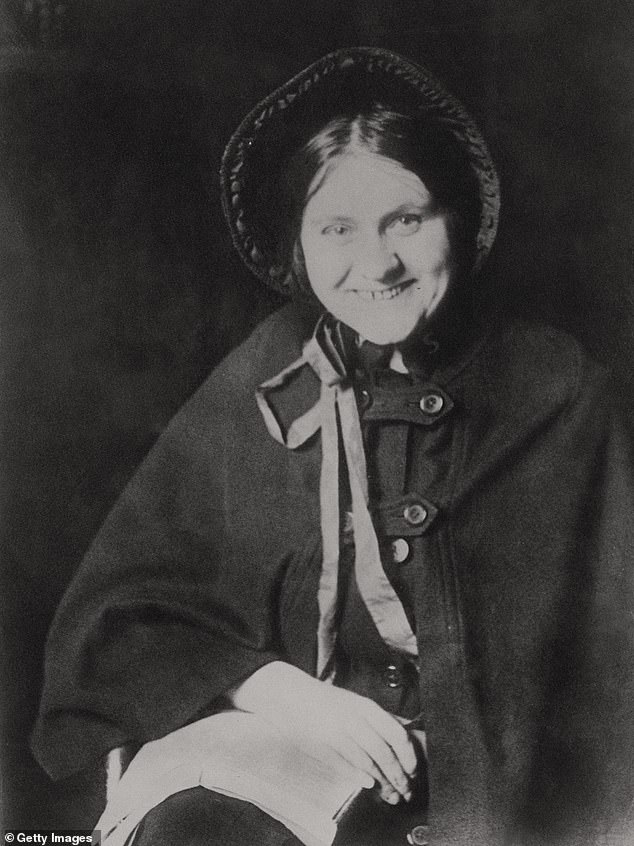 Maud (pictured) had her successful career bought to an end by the outbreak of World War II, and died in 1964 at her home in East Sussex

She was even once attacked with a hat pin by an irate female crook. ‘And hat pins are dangerous weapons in the hands of an incensed woman,’ commented Maud.

When all else failed, she seems to have acquired for herself a hefty right hook. ‘I did hit a man once — and in no less a place than a few yards from Bond Street,’ she admitted.

But was it perhaps the case that not all of her stories were entirely true? Was this why Harry was so sanguine about the whole thing? Were some of her articles simply exaggerations of real-life cases to protect the privacy of her clients?

The truth will never be known, although it may be significant that her social circle is known to have included fellow crime writer Dorothy L. Sayers, creator of amateur sleuth Lord Peter Wimsey.

The outbreak of World War II brought an end to her hugely successful career. Maud was by then nearly 60 and, for some while, Harry had been urging her to retire. She left her office, stopped advertising her services, disbanded her staff and went back to being Mrs Elliott. The lady had vanished.

From that point on, according to surviving family members, Maud’s alter ego was not referred to — so much so that some of them have been astonished to learn of her double life.

She died in March 1964 from a heart attack at her home in Bexhill-on-Sea, East Sussex. And so passed one of the 20th century’s trailblazers: a woman very much ahead of her time.

During an era in which female voices were rarely heard, she had not only enjoyed a rich and fulfilling career, and played an active part in public life, but raised a large family, including a seventh child, her younger sister Nellie.

Having it all? Maud West was there decades before the expression was even thought of.