Ahead of his economic statement to parliament, Treasurer Jim Chalmers did a string of television and radio interviews.

Almost every one of his interlocutors this week asked if Australia was headed for a recession.

Put aside the economic fundamentals at present. Unemployment is at 3.5 per cent, interest rates are still historically low, there is a record number of Australians in work and annual GDP is running at 3.3 per cent. 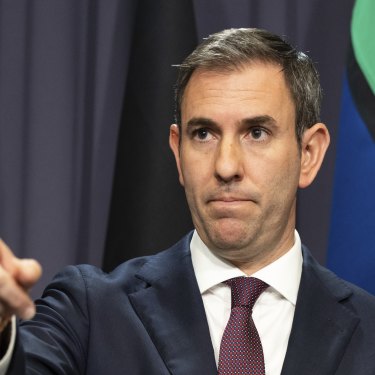 Treasurer Jim Chalmers, pushing back at questions on a possible recession, has set a large economic agenda for the government’s first year in office.Credit:Alex Ellinghausen

The fear is of the future.

Chalmers, who has tried to paint what he calls a realistic picture of the challenges ahead, drew the line when it came to recession.

“I am personally quite confident that we will weather the storm, but we need to brace ourselves for that heavy weather in the meantime, in the near term,” he said.

Those challenges were displayed in the treasurer’s parliamentary address. That the first ministerial statement of the Albanese government was about the state of the economy says something about its importance over the coming three years.

The biggest takeaway from Chalmers’ statement was around real wages. With inflation now tipped to reach 7.75 per cent by year’s end, most Australians will endure another fall in their real take-home pay.

It could be 2026 or beyond before wages get back to where they were just ahead of COVID-19.

Just hours after his address, data out of the United States showed the world’s largest economy contracting for a second consecutive quarter.

But, like almost everything in the economic sphere of the past two years, it’s a weird slowdown in the US. The 0.2 per cent decline in the economy over the past three months was overwhelmingly driven by businesses being unable to replenish their inventories (this accounted for 2 percentage points of negative economic activity). Unemployment in the US is still 3.6 per cent while annual wage growth is north of 5 per cent.

Even Chalmers’ downgraded forecasts for Australian economic growth – 3 per cent this financial year and 2 per cent in 2023-24 – are a long way from suggesting mass unemployment and businesses shutting their doors.

The International Monetary Fund on Friday, in an outlook about the Asia-Pacific, in effect confirmed Chalmers’ view.

Director of the IMF’s Asia and Pacific department, Krishna Srinivasan, said the events playing out in Europe and elsewhere would weigh on the region’s economies.

“The global economic outlook has darkened, and growth across Asia and the Pacific is poised to slow further amid the continuing impact of Russia’s invasion of Ukraine and other shocks,” he said.

Those dark portents, on top of the rapid increase in official interest rates by the Reserve Bank (which will likely add another half percentage point to the cash rate on Tuesday), are affecting consumers.

New research done for ANZ Plus gives some insight into those impacts.

A third of those surveyed said they sometimes found it hard or struggled to stay on top of their finances. That included 1.5 million who said they “don’t feel in control at all”. 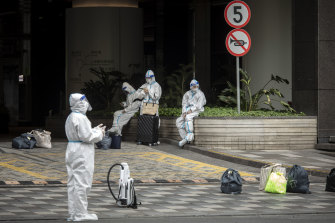 Lockdowns across China, like this one in Shanghai, are weighing on global supply chains and adding to inflationary pressures.Credit:Bloomberg

The young (under 30s), women, people living outside capital cities and those earning less than $2000 a month are all more likely to say they are struggling.

The same research found 71 per cent of people said they were already curbing their spending or planned to do so to deal with the recent lift in the cost of living.

And when it came to spending patterns, three-quarters of those quizzed said they thought they spent too much even before the price of most goods and services started to soar.

Going to a restaurant or grabbing a takeaway was the most cited spending “vice” (by 53 per cent of people), followed by online shopping. Other areas people thought they spent too much on included streaming services (19 per cent), socialising, family gifts and personal care.

Based on this sort of survey, people are cooking dinner at home, by themselves, ending their Netflix or Binge subscriptions and cutting back the value of the birthday presents they hand out.

That’s enough to sour any consumer, an issue Chalmers is awake to.

The economy and the budget are not the only challenges facing Chalmers and Gallagher.

The treasurer and the government have set themselves other substantial tasks, not least the review of the RBA announced a week ago.

The review, driven in part by concern about the bank’s monetary policy settings before the COVID-19 pandemic, will deliver some substantial proposals that could easily turn into an ideological battle with the Liberal Party and others.

In addition, the Productivity Commission is undertaking the second of its five-yearly reviews of the nation’s productivity, which will provide a string of recommendations for far-reaching economic reforms.

Its last report, 2017’s Shifting the Dial, sits collecting dust due to the contentious proposals it contained. But the issue it raised – Australia’s poor productivity performance – demands attention.

Chalmers knows one of the missing elements to Australia’s economic performance since the global financial crisis has been productivity.

The PC report will contain ideas that could, if implemented, provide a much-needed boost to the economy that would flow through to workers via real wage increases. But the politics around those ideas will be contentious.

There’s also the shortage of workers across the country.

ANZ’s economics team this week predicted the jobless rate would fall below 3 per cent early next year. The last time unemployment was in the 2s, Australians watched black-and-white television.

Finding ways to get more Australians into the workforce will be a key part of the government’s jobs summit to be held in early September. Ideas stemming from that will emerge in the run-up to the October budget.

Soon after that is over, the government will start work on next year’s May budget.

It would be a full economic agenda even for an established, long-term government, let alone one in its first year in office.

Economists believe Chalmers has started well in the treasury position. But the events of recent months that have caught most policy experts by surprise show that nothing can be taken for granted.