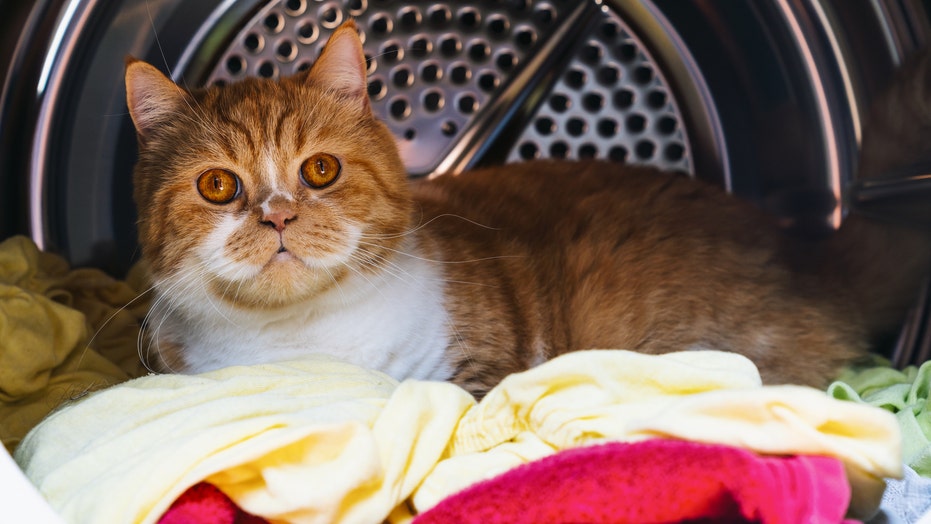 A new study finds that humans aren’t the only ones susceptible to COVID-19 infections. Ferrets and cats can also catch the deadly virus.

A Burmese cat named Oscar proved he had multiple lives after surviving a grueling 12 minutes in an active washing machine after apparently venturing in to take a nap.

“The poor little cat had his hands on the glass as he was doing the rotations, and he was looking at me,” Oscar’s owner, Amanda Meredith, tells ABC Sunshine Coast of the traumatic incident. The Queensland, Australia native was first alerted to the 2-year-old kitty’s ordeal when she heard a peculiar meowing sound after her husband, Angelo, loaded bed sheets into the washer.

PET CAT REUNITED WITH ITS FAMILY 12 YEARS AFTER IT ESCAPED

Amanda initially thought the noise was emanating from the cupboard, but soon realized the hair-raising truth: Oscar was in the washing machine.

His veterinarian, Dan Capps, later suspected that the cat might have crawled into the unit to escape Australia’s frigid winter weather.

“It was tragic,” said the distraught owner, who was forced to wait an agonizing two minutes for the front loader to shut off, so the door could open and she could free the feline from the hot cycle.

Amanda then phoned Capps, who said the next six hours would be “touch and go” for the cat.

Fortunately, despite getting beaten up by the appliance’s fins during the crisis, Oscar emerged from the incident without serious injury, albeit “very soft,” according to his grateful owner.

After a course of anti-inflammatory medication and a 24-hour stay at the vet, the lucky kitty was allowed to return home, where Amanda says he slept for a full week.

And Oscar continues to be feline fine after his impromptu whirlpool session. The cat reportedly recovered from the ordeal within several weeks, although his owner jokes that he used up “three of his nine lives.”

Unfortunately, the tumble-tuous experience hasn’t dissuaded Oscar from nosing around the washing machine. His owner suspects he might be suffering from “PTSD” (post-traumatic spin-cycle disorder, we presume) as “he has to sit at the door watching the wash cycle.”

This isn’t the first time a washing machine’s taken a kitty for a spin. Last June, a hardy Minnesota cat spent a whole 45 minutes getting sloshed about in a washer and lived to tell the tale, er, flick his tail.

This story was originally published by the New York Post.