“I remember all the f–ked up and [divisive] things Trump has done,” Hart wrote.

Carey Hart is coming to Pink’s defense after critics slammed the singer for showing her support for Joe Biden and Kamala Harris.

It all began on Sunday when Pink, 41, posted a selfie of herself in a Biden-Harris T-shirt while posing on her motorcycle. “Take em out for a rip,” she captioned the pic. #jesusmaryandjosephicannotwaittovote”

In response, Pink received backlash from several critics who took issue with the Grammy-winner voicing her political views on social media. And her husband wasn’t having it. 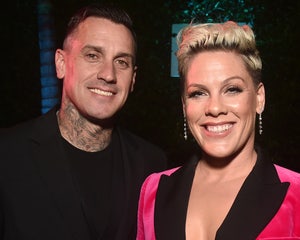 Pink Posts Sweet Birthday Tribute For Husband Carey Hart: 'I Am Grateful For You Every Single Day'

After another user claimed Democrats have “destroyed Black Lives for decades” and said Biden would take Hart’s guns, the ex-motocross racer fired back with a long post in which he went after Trump and shared his thoughts on several of Biden’s policies.

“I’ll try to keep this short,” he began, per Yahoo. “Yes Biden has been in politics for 47 years. Reason I am voting for him is because I ‘hope’ he puts together a great team that will do positive things. And that is what most of Trump’s high-profile early [supporters were] planning for him to do. But his narcissism kicked in and away he went.”

“Trump retweets white power shit all the time. Called peaceful protesters animals, and called the racist pieces of shit in Charlottesville ‘good people,” Hart continued. “[The Second Amendment] is a constitutional right, and no two people (Biden and Beto) can take that away. I for one think there needs to be stricter gun laws, ’cause guess what? That won’t affect me because I’m a law-abiding citizen.”

The father of two went on to explain more reasons why he plans to vote for Biden.

“Military? Cheeto said that military were losers, made a stink about visiting a military cemetery and called a senator POW survivor a ‘loser’ for getting captured. All while he dodged the draft due to shin splints,” Hart wrote, adding. “If Trump loves the military vets so much, why has he done next to nothing for them in the last 3.5 years? I for one don’t want to defund the police. But there needs to be a radical recalibration of how they do things.”

He continued, “Good on Trump if he did raise [salaries] for [minorities]. I must have missed that move, but good on him if he did. To wrap up, all those negatives for his one right doesn’t get my vote. I’m sure the next dig will be some ‘Creepy Joe’ bullshit. Tell you what, I’d rather Joe smell my daughter’s hair than Trump to grab her by the p—y.”

“One thing you should know about me: Time doesn’t heal all,” Hart concluded. “And I remember all the f–ked up and decisive things Trump has done. And that is why he won’t get my vote. Fact check anything I said.”

While Hart later noted in another comment that he’s “more of a Republican,” he said the party’s “morals are bullshit.”