As climate meetings continue at COP26 Glasgow, a report from the Global Carbon Project finds emissions from coal and gas use are set to grow more in 2021 than they fell in 2020, though emissions from oil use remain below 2019 levels.

The project’s annual carbon budget finds global carbon emissions dropped 5.4 per cent in 2020, but increased by 4.9 per cent this year.

The picture is mixed for major emitters: the United States and European Union returned to pre-COVID trends of decreasing carbon emissions while Indian emissions increased. In China, the pandemic sparked further growth in emissions, due to industry and power sector growth. 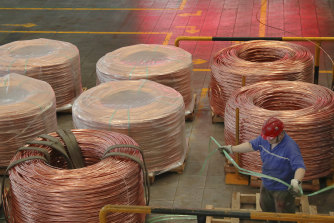 China’s emissions rose during 2020, despite the pandemic, due to manufacturing demand. Credit:AP

“Investments in the green economy in post-COVID recovery plans of some countries have been insufficient so far, on their own, to avoid a substantial return close to pre-COVID emissions,” said Professor Pierre Friedlingstein, from the University of Exeter, who led the study.

“The rapid rebound in emissions as economies recover from the pandemic reinforces the need for immediate global action on climate change.”

The data shows a further rise in emissions in 2022 cannot be ruled out if road transport and aviation return to pre-pandemic levels, and coal use is stable.

Considerable progress has been made on decarbonising the global energy systems since the Paris Agreement was signed in 2015. And renewables were the only energy source that continued to grow during the pandemic, the research finds.

Australian National University’s Professor Frank Jotzo, who was not involved with the report but briefed the media on the Australian emissions picture, said in Australia the pandemic lockdowns meant there was a seven per cent reduction in transport emissions from 2019 to 2020.

“COVID normal will see a return to transport normal in Australia,” Professor Jotzo said. “For a long time we have seen increases in transport sector emissions rather than decreases.”

Electricity consumption in Australia remained about the same during lockdown periods because although public buildings weren’t used, there was more energy consumed in homes, Professor Jotzo said. Industry and manufacturing emissions were not affected because production largely continued.

Australia has seen a continued reduction in electricity sector emissions, year-on-year, since 2017. This is because of supply shifting away from coal-generated energy to solar, wind and rooftop solar, resulting in sustained emissions reductions.

Based on current trajectories federal the government’s current target of cutting emissions 26 to 28 per cent by 2030 would be exceeded, Professor Jotzo said.

Get daily updates on the climate summit that will shape our future. Sign up to our COP26 newsletter here.