Benito Mussolini was the fascist dictator of Italy from 1925 to 1943. In 1938, his government passed anti-semitic laws with Mussolini himself writing an article that year which aligned Italy with the German concept of the Aryan race. It is thought that Mussolini was responsible for the death of one million people and the suffering of countless others. Now, a new book has claimed that the British government helped orchestrate his rise to power.

Although Mussolini’s career began working at socialist publications, he split from the party in 1914 and founded his own newspaper, Il Popolo d’Italia, “The People of Italy”.

His newspaper was pro-war during World War One and later became the main publication of the Fascist movement after the conflict ended in 1918.

Mussolini then rapidly rose to power, taking a Parliament seat as a deputy in 1921 with his party changing its name to the Partito Nazionale Fascista.

By the following year, armed Fascists stormed Rome, and King Victor Emmanuel III dissolved the government, asking Mussolini to form a new one with him as Prime Minister. He also held the positions of Minister of the Interior and Minister for Foreign Affairs. 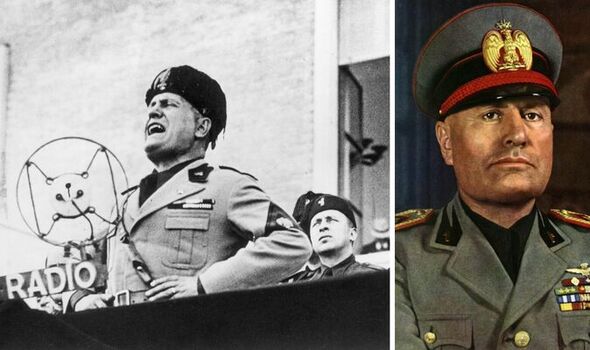 In late October 1922, Mussolini threatened to march on the Italian capital to take control of the government. Thousands descended on Rome on October 28 in a bid to persuade the King to hand over power.

It was this march that the British government helped put together as it wanted Mussolini as leader, the authors of Nero di Londra have claimed. Mr Fasanella told The Times: “The British helped orchestrate the march and propel Mussolini to power because they wanted to make him the key figure in a government which would be useful to them.”

Sir Ronald Graham, then the British ambassador to Italy, liaised with leaders of the march in the days prior, UK National Archives documents show. The leaders gathered in a building owned by a half-English aristocrat, Romeo Adriano Gallenga Stuart, who the authors claim was a British intelligence informant.

Mr Cerenghino told The Times they believe Graham was giving the fascists useful advice as he was being “constantly” updated by the marchers as they descended on Rome. Not only this, but a senior British Conservative politician, Sir Samuel Hoare, claimed British money was used to “form the Fascist Party and to finance the march”, documents reveal. 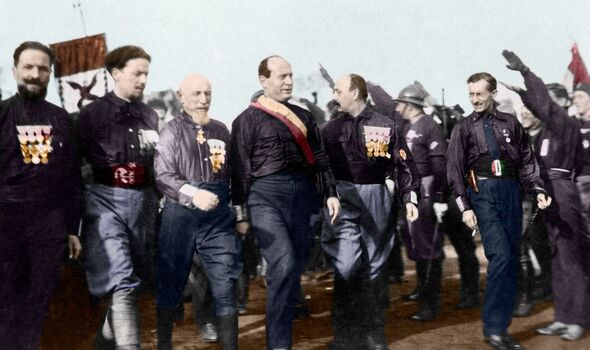 Hoare had worked with Mussolini previously. In 2009, it was reported that Mussolini was paid £100 a week – the equivalent to around £5,350 today – by MI5, which was authorised by Hoare, who was its representative in Rome. Mussolini was paid to peddle pro-war propaganda in his newspaper and the former journalist reportedly also told Hoare he would send army veterans to beat up peace protesters in Milan.

Cambridge historian, Peter Martland, who discovered the details when examining Hoare’s papers, told The Guardian: “Britain’s least reliable ally in the war at the time was Italy after revolutionary Russia’s pullout from the conflict. Mussolini was paid £100 a week from the autumn of 1917 for at least a year to keep up the pro-war campaigning.”

Mr Fasanella told The Times that Hoare had brought his experience of breaking up left-wing meetings through the use of the Anti-Socialist Union to the Italian capital. He said: “Hoare had specialised in the use of violence and propaganda in Britain and he brought that method to Italy.”

Mr Cereghino added: “Mussolini’s career between 1917 and 1922 would not have taken the path we know without the influence of the British conservative establishment.” 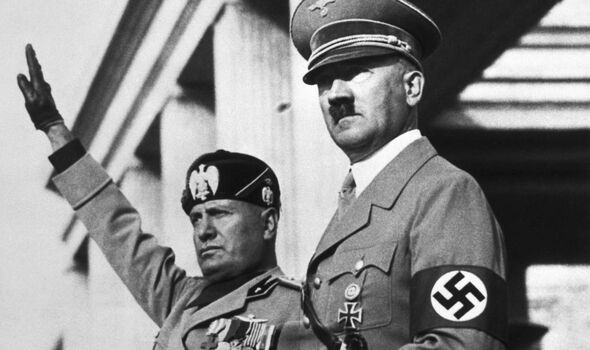 After Mussolini declared himself dictator in 1925, Communists were arrested and Socialists were expelled from Parliament; the fascists owned 66 percent of the newspapers and government propaganda was peddled in publications and even the cinema.

Italy entered World War Two in 1940, with Mussolini siding with Adolf Hitler. But by 1943, Italy was seen to be losing, and Mussolini was voted out later that year.

When he tried to run away to Spain in 1945, the allies arrived in Italy, and Mussolini was arrested. It is thought he was shot by a firing squad on April 28 that year.