Blackout warnings for the eastern seaboard have been lifted after the energy grid chief assured the public that enough power supply had come back online over the past 48 hours to meet expected demand over the weekend.

The reprieve for households came as NSW Premier Dominic Perrottet declared Australia would need gas from the state’s controversial Narrabri project as soon as possible. His Victorian counterpart, Daniel Andrews, said he was also willing to consider new gas projects while reaffirming his government’s ban on coal seam gas extraction. 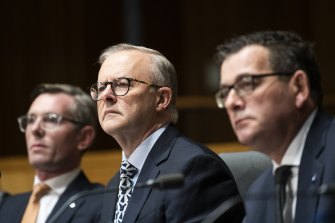 They were speaking after premiers and chief ministers joined Prime Minister Anthony Albanese on Friday for the first meeting of national cabinet since Labor took power, agreeing to set up reviews into health funding and skills policy. The meeting, which also discussed the energy crisis, ended without revealing any new measures to shore up supply or bring down prices.

Soaring coal prices and multiple plant failures meant 25 per cent of coal-fired power capacity was offline, forcing the Australian Energy Market Operator (AEMO) to take the unprecedented step of suspending the National Electricity Market on Wednesday so it could command when and where electricity supply should be directed.

But AEMO chief executive Daniel Westerman said on Friday “the outlook from today is much more healthy than it was a couple of days ago”.

Westerman said the chaotic week demonstrated the need for investment to bring on and back up more renewable energy. The operator’s renewables road map was still “absolutely the right pathway for Australians to have access to the lowest cost, most reliable energy”.

“These last couple of days are a reminder that the pace of change is high and that we actually need to make sure we’re investing in renewables, in firming, in transmission and then take those longer-term actions,” he said in an interview.

He said the market suspension would not be in place “for a minute longer than it needs to be” but did not give a timeline for when it would be lifted.

In a statement issued after national cabinet met, state and federal leaders said they would continue to work together on energy policy.

With the energy regulator forecasting peak winter demand for gas may exceed supply in the long-term, federal and state political leaders have been unable to reach a consensus on whether Australia should develop Narrabri or other gas fields.

Gas is used to fuel fast-start power plants, which some experts argue is a perfect complement to increasing volumes of renewable energy coming into the grid. However, some environmental advocates warn more reliance on fossil fuels will slow the shift away from polluting energy sources.

Perrottet said the Narrabri gas project in northern NSW would be key to future energy security.

“We are completely committed to Narrabri and are working with Santos to get that project off the ground,” he said. “A key component of that agreement, and the work we have committed with Santos, has been that there be a reservation policy attached to that project, of which they have supported and agreed to.”

Santos is seeking approval to start production at Narrabri in 2026 to deliver gas through a pipeline that will connect to Sydney and Newcastle, with a pledge that all the gas will go to the domestic market.

Narrabri is forecast to supply 70 petajoules every year over 25 years. AEMO said in March there was a “growing gas supply scarcity challenge in the south-east from 2023” even though it forecast demand would fall from about 125 petajoules in 2023 to less than 100 petajoules in 2024.

Federal Resources Minister Madeleine King backed the Narrabri project this week but was criticised for doing so by the Labor Environment Action Network, Greens leader Adam Bandt, Greenpeace and others. King also said the Victorian restrictions on gas were a barrier to future supply.

Andrews stood by his policy, which bans coal seam gas extraction, but said it was up to gas explorers to make the case for new projects outside that prohibition.

“I would say that there are processes to be gone through and if gas is found and if someone comes forward with a proposal then there is nothing ruling that out,” he said.

“But we don’t apologise for doing exactly what we said we would do. We sought a mandate, we don’t have fracking in a state and we are very, very proud of that.”

The rapid onset of cold weather has highlighted the nation’s need for gas. Over the past year, about 60 per cent of the power in the national electricity market came from coal, compared with 7 per cent from gas-fired power stations and 33 per cent from renewables, according to the AEMO.

But over the 24 hours to Friday afternoon, gas supplied 16.2 per cent of the electricity, reflecting outages at coal-fired power stations. A further 57.4 per cent came from coal and 25.8 from renewables.

With gas production declining in Bass Strait, the federal government wants to hasten the shift to renewables but acknowledges the need for more gas and is considering a reservation policy to force exporters to ship more gas to the local market.

One option is to cut exports from Queensland by breaking long-term contracts, allowing supplies to go south by pipeline. There is no terminal in NSW or Victoria to take gas from Western Australia. Andrew Forrest’s LNG import venture in Port Kembla has said it could start imports in 2023. The Victorian government opposes an import terminal at Western Port.

Federal Energy Minister Chris Bowen has agreed with state counterparts to develop a gas storage facility but is yet to say how big it would be, where it would be or how quickly it could be built.