A $60 billion stimulus package including tax cuts and cheques of up to $1000 to low and middle income earners could stave off an "income cliff" and generate jobs for 135,000 people, new analysis highlighting the importance of next week's federal budget reveals.

Ahead of a fiscal blueprint Treasurer Josh Frydenberg has argued will boost aggregate demand across the country to bring down unemployment, research from two separate economic experts suggests the government will have to ramp up spending in the short term.

Treasurer Josh Frydenberg delivering last year’s budget which forecast a surplus of $7.1 billion and a lid on spending. Now facing a deficit of more than $200 billion, the treasurer is being urged to lift spending.Credit:Alex Ellinghausen

Modelling by consultancy firm EY, to be released on Tuesday, found spending $60 billion on reducing personal income taxes, boosting the JobSeeker payment and extra infrastructure projects over two years would cut the jobless rate by a full percentage point. That equates to an extra 135,000 people in work.

The government has committed itself to maintaining fiscal support for the economy until unemployment is comfortably below 6 per cent. It is currently 6.8 per cent, although Treasury and private sector analysts are expecting this to increase as more people re-enter the workforce.

EY chief economist chief economist Jo Masters said an extra $750 support payment, worth $3.4 billion, would also smooth over an income cliff facing the country as support measures such as JobKeeper and the coronavirus supplement are wound down.

"We know that the economy will be weaker and unemployment higher without additional fiscal stimulus, and that spending needs to both ease the income cliff and start to boost aggregate demand in the economy, which is what will drive jobs," she said.

The JobKeeper wage subsidy was reduced on Monday from a flat $1500 a fortnight to $1200 for people who work more than 20 hours a week and down to $750 for those working fewer than 20 hours.

The coronavirus supplement, being paid to about 2.2 million people, was cut last week by $300 a fortnight in a move estimated to cut total government support by more than $700 million a month.

Ms Masters said while the government's measures had delivered a much needed cushion to the economy, it had to use extremely low interest rates now to build growth over the longer term.

"Low interest rates open policy choices and we know that the economy will be weaker and unemployment higher without additional fiscal stimulus," she said. 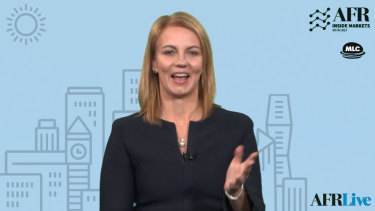 EY chief economist Jo Masters says up to $60 billion in stimulus would help drag down the nation’s jobless rate by a full percentage point.Credit:Nick Lenaghan

Separate research from new economic thinktank the Blueprint Institute released on Tuesday found the government needs to go further in terms of direct financial support for taxpayers, suggesting $1000 cheques to millions of Australians.

It also backs an extra $4 billion to go into a further $750 cheque to those on welfare, including age pensioners, while also pulling forward the government's stage two tax cuts due to begin in mid-2022.

The total cost of the three measures would amount to $47 billion or 2.4 per cent of GDP.

Blueprint chief economist Steven Hamilton, a former economist with the federal Treasury, said apart from directly supporting the economy now, the government also had to "ignite the next boom" by investing in research and development.

He said improving access to capital for young and fast-growing firms could be done by replicating programs overseas such as Israel's Innovation Fund.

"To pay down this debt we will need a much more efficient tax base and much faster growth," he said.

"This will require wide-reaching reforms that were necessary before the crisis and are now more critical than ever before."

Mr Frydenberg flagged on Friday that the October 6 Budget will contain support to get people into jobs and businesses investing in the economy again.

"In the Budget, you'll see a number of measures which are designed to get more people into work, that's by boosting aggregate demand, that’s by boosting business investment and that is by supporting the economy to grow," he said.