BEL MOONEY: As with so many of us, Covid made this a profoundly intimate ceremony

How fitting it was that the mourners who walked behind the splendid Land Rover hearse did not wear uniforms.

Whatever painful juggling of competing vanities our Queen had to undertake (at a time when she should have been spared), and no matter how miffed her third son and grandson might have felt — the absence of gold braid and epaulettes was surely a blessing. Because black is the colour of grief — and sombre funeral clothes made those mourners look so much more normal.

That may seem a strange thing to say, when so much magnificent military pomp and ceremony surrounded them and when, after all, this was a moving State occasion. Yet we must never forget the Royal Family is exactly that — a family.

And dressed in black and obeying the rules on Covid funerals to the letter, they prompted thoughts of all the countless other families who, in the long, hard pandemic months, have endured and had to bid farewell to their loved ones in small ceremonies. In many cases, it added to the terrible grief; they were not even allowed to mourn in the way they wished.

When people use the phrase ‘a good send-off’ about a funeral, they are expressing a feeling as old as humanity: that the dead deserve ceremony. Formal words and actions, solemn and sacramental, are an essential part of the great transition between life and death. 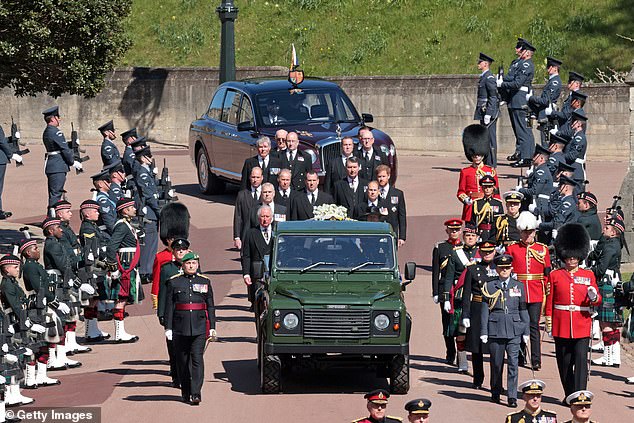 Just as the Prince of Wales and Princess Royal must have felt anguished that their father could not be given the full, magnificent funeral he deserved, so other sons and daughters (and I am one) have felt their sadness doubled because dear friends and family members were forced by Covid rules to stay away from a family funeral. Pictured: The funeral procession for Prince Philip

Gathering together in a church, a cremation chapel or a woodland for natural burials matters to those who mourn.

Somebody famous or popular would normally bring many people together; for others it may be just a handful. Yet when we read of an old soldier (say) who has no one to watch his funeral, there’s always a great rallying-round. Strangers gather to pay respects. Everybody, we think, deserves to have his or her passing marked in the most fitting way possible.

As Covid rules meant the Queen had to sit in sorrowful isolation, other widows all over the world will have identified with her, having been deprived of the loving arms that would give them support and comfort in normal times.

In one notorious incident, a son was told — with insufferable, inhumane officiousness — to step away from his own weeping mother at his father’s funeral.

Just as the Prince of Wales and Princess Royal must have felt anguished that their father could not be given the full, magnificent funeral he deserved, so other sons and daughters (and I am one) have felt their sadness doubled because dear friends and family members were forced by Covid rules to stay away from a family funeral.

Why does it matter? Because no matter how sophisticated we become, the great moments in life fill us with awe. Birth, marriage, death . . . these are the most significant punctuation marks in an individual’s lifetime, giving meaning.

We could add coming-of-age, betrothal, big birthdays, retirement . . . moments marked by the pop of a cork, speeches, gifts, hugs and kisses. Such events speak of the eternal human need for ritual. They link us with our first ancestors who raised arms in unison to the sky, acknowledging a force greater than themselves. 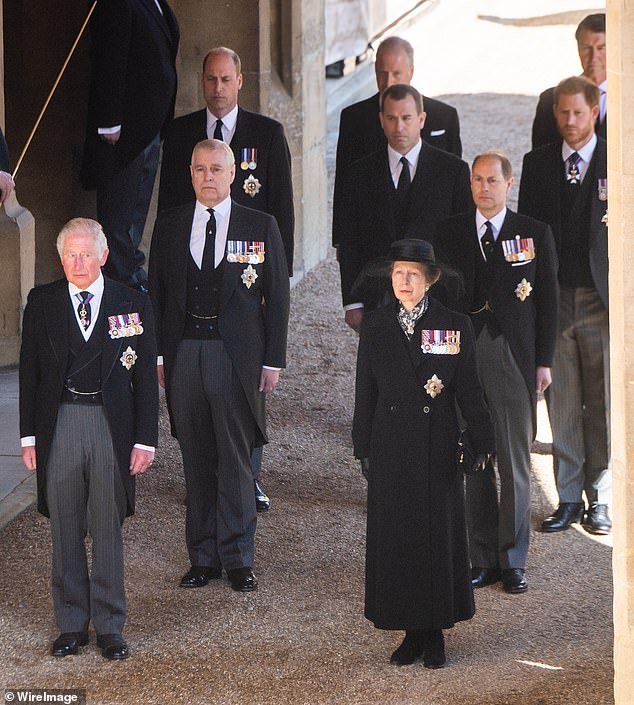 The absence of gold braid and epaulettes was surely a blessing. Because black is the colour of grief — and sombre funeral clothes made those mourners look so much more normal. Pictured: Members of the Royal Family at Prince Philip’s funeral

The need for ritual does not diminish in a sceptical age. Some who never set foot in church still seek to ‘use’ it for marriages, christenings and funerals. It’s interesting to speculate why.

Do non-churchgoers find within themselves an ancient need to bow the head within a holy place? To sense that mystery?

Of all ceremonies, surely a funeral has the most profound meaning, since it serves a double purpose: gathering together for the ceremony both commemorates the dead and helps the living to accept the loss and move forwards into the rest of their lives.

When I drove to visit my mother after the Duke of Edinburgh’s funeral was over, she told me that when she saw the Queen sitting there she thought: ‘They were married for 73 years — same as me and Dad.’ That is what I mean by identification — the sense that, for all the grandeur, that family has much in common with all families. And had to accept that this funeral would be on a diminished scale.

Not even our Sovereign Queen could bend the implacable Covid rules and have a devoted lady-in-waiting next to her in St George’s Chapel. Not even the heir to the throne could perhaps whisper that surely the nation wouldn’t mind if there were 31 people in that place.