Things turned raucous over AUKUS. Last month’s WordPlay queried how to say this newborn acronym, a blend of Australia, UK and US. Nobody doubts how to say each nation, but mash the trio into one and awkwardness ensues.

By way of update, AUKUS is the trilinear accord to build submarines. Originally France was Australia’s lone partner, but PM Scott Morrison torpedoed that deal, seeing a potential FAUST devolve into farce, and maybe a revenge drama by Act III.

Diplomacy turned icy. Trade deals wavered. Yet for most of us, the bugbear emerging from this backflip was how to utter the upshot’s alliance. While each elected crony in the acronym favours aw-kus, several readers have responded with their own views. 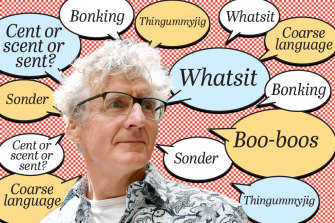 Simon Dickinson believes France should return to the table, making way for FAUKUS, a fusion more in keeping with President Macron’s sentiments. Others such as Kel Roberts are eager to massage the amalgam. Given the Seawolf subs are American in design, then surely USUKA says more about the bloc’s hierarchy. In so many ways.

Geoff Lyons votes for a third way. “As Aussies from Oz, ockers or otherwise, if the AU in AUKUS stands for the first sound in Australia, then ok-kus it should be.” Ocker subs? I think you mean sangas, mate.

Ultimately, whichever mash-up or utterance prevails, there remains one cloud hovering over the whole affair. Couch potatoes will know where I’m going, thanks to Vigil, the latest BBC drama, based in a submarine. Whether we’re building them, or watching murder mysteries set inside them, submarines are never called ships, apparently. Never. They are boats. But why?

The short answer is scale. Said another way, a ship can carry a boat, but a boat can’t carry a ship. So goes the golden rule, despite that gold tarnishing a little since being coined. Take these Virginian Seawolves, say, the fleet at the AUKUS heart. Each sub measures some 120 metres long, weighs 8600 tonnes without a sailor aboard. That’s one ship-like boat.

As a sea captain’s son, I fathom sailor-talk. Rooms are cabins, windows are portholes, walls are bulkheads. Left is port, and so on. But why can’t we shuffle the deck to agree that supersized vessels are ships, even if those vessels (like submarines) are traditionally categorised as boats?

Can’t we shuffle the deck to agree that supersized vessels are ships, even if those vessels are traditionally categorised as boats?

Language changes, just as a refit of Nemo’s Nautilus would now come complete with a squash court. Consider the HMAS Ballarat, a sleek Anzac-class frigate with Sea Sparrow missiles, twin diesel engines and helipad. A mighty vessel, a ship by definition, but at 118 metres in length, were the Ballarat to piggy-back a Seawolf, then a so-called boat could well sink a ship without engaging a lousy torpedo. 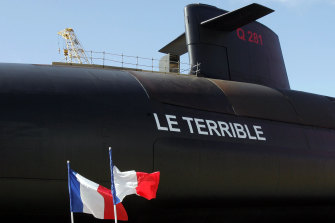 French flags fly during the launch of the country’s nuclear-powered submarine, “Le Terrible”, in Cherbourg. There have been terrible ructions between France and Australia since the AUKUS alliance was announced.Credit:Judith White

Boat hails from Old Norse beit, which means boat. No help there. Ship on the other hand gets a downsize in derivation, the word arising from scipfi, High German for cup. Vessel of course is the catch-all term, an echo of cup that covers both categories, where size is one distinction.

Function is another – from permanent crew versus land-based staffers. Another discrepancy is the centre of gravity, I understand. As a rule, a ship has more weight above the waterline, meaning the vessel will heel outwards when turning, whereas boats lean in.

Tall-ship buffs argue the gist is mast tally, where three square-yarded masts qualify a vessel’s ship-ness over the boat-ness of a supermaxi, say. Perhaps the best advice is to trust your captain. Should boat offend their ears, then upsize your language before you’re jettisoned. Even if that vessel happens to be underwater.