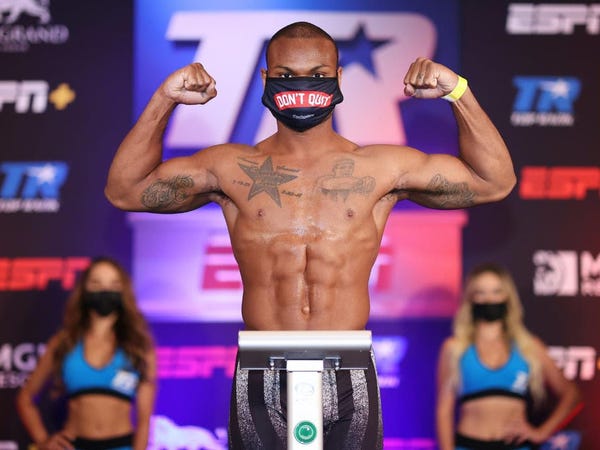 Ware competes in the super middleweight division, has a professional record of 13 wins (eight knockouts) against two losses and two draws, and fights Steven Nelson at the MGM Grand Conference Center in Las Vegas on Saturday.

However, Ware is also a firefighter. As a first responder, his instincts kicked in when he saw Pete Susens, a long-time events coordinator for Top Rank, collapse during a meeting with the Nevada State Athletic Commissioners.

Ware was filling out customary pre-fight paperwork according to a spokesperson for Split-T Management, which represents Ware, when the incident took place.

"Eyewitnesses painted a bleak picture as to Susens' condition," the spokesperson said in a statement sent to Insider. "That's when Ware jumped into action by performing chest compressions, reviving Susens."

On Twitter, Ware said: "I'm here for my fight but I had to put EMS skills to work and do some CPR.

"Happy to say the guy was talking a bit, alert, [and] headed to the hospital. I'm thankful! I feel I saved a life."

The Split-T Management spokesperson said Susens was taken to hospital, was responsive, and is expected to make a full recovery.

Ware then comfortably made weight for his fight, registering 168-pounds on the scales.

His fight with Nelson will be broadcast on ESPN+ from 10 p.m. ET on Saturday.