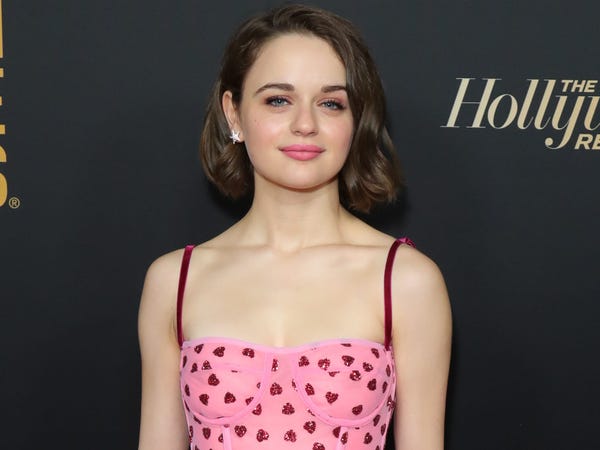 Joey King gave fans a behind-the-scenes peek at her outfit for the 2020 MTV Video Music Awards, and her neon ensemble may require sunglasses to fully appreciate.

King — the 21-year-old, Emmy-nominated actress known for her roles in movies like "The Act" and Netflix's "The Kissing Booth" — is one of the presenters for this year's VMAs, which air on Sunday at 8 p.m. ET and will involve a series of socially distant performances around New York City's five boroughs.

King's stylist, Jared Eng, shared details from her outfit for the awards show via Instagram on Saturday. The actress posed in a long-sleeved, form-fitting floral dress, as well as the matching tights and gold necklaces, which are all pieces from Versace.

King was pictured in two different pairs of shoes. Over the floral tights, King wore a pair of strappy black heels from Giuseppe Zanotti. A similar pair retails for $845 on the designer's website. She paired her dress — sans-tights — with a pair of ISCREAM red pumps in style #7 Cherry, which retail for $470 at the time of writing.

King also gave fans a glimpse of her post-VMAs outfit, which was much more casual than her awards-show dress.

Representatives for Jared Eng Studios did not immediately respond to Insider's request for comment.