The unexpectedly rapid rise of renewables is driving more and more clean and cheap energy into the electricity grid, but urgent reforms are needed to avoid price rises and power failures, according to the Commonwealth's Energy Security Board.

A deluge of new wind and solar projects, in addition to household rooftop solar, is outstripping predictions. 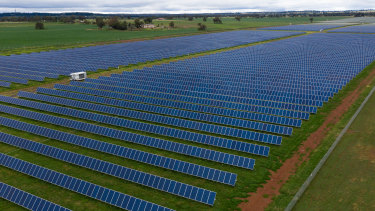 Renewable energy is on track to grow from its current 37 per cent market share to supply 94 per cent of the grid by 2040.Credit:Janie Barrett

Energy Security Board chair Kerry Schott said the current growth in renewables was on track with the fastest rate of change foreseen by the Australian Energy Market Operator, released in its official modelling in July.

This rate of change exceeds the federal government's projections, released in November, which said renewables would comprise 55 per cent of the power mix by 2030.

"It's very good for emissions, but it means coal plants will retire faster than anybody thinks," Ms Schott said. "Already, we're seeing big coal plants are being operated below full capacity and they're doing what they can to keep costs down." 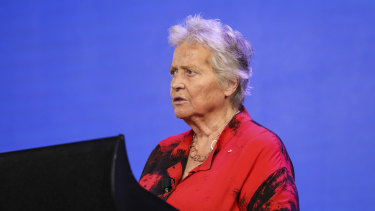 Coal plants are required to specify their anticipated end of life, and over the next 20 years, about 60 per cent of coal-fired capacity is set for closure.

Ms Schott said the ESB market design paper, which called on industry and governments to co-operate to reform the electricity grid, showed the "absolute urgency" of new policy and regulations to stop electricity price blowouts and power supply failures.

"The time to tackle these problems is now," she said. "The market bodies working together have held hundreds of workshops and consultations, spoken to thousands of stakeholders and considered hundreds of thousands of pages of submissions.

"It's now time for tough, united decisions. If we keep kicking this further down the road, it's going to cost us all more for electricity in the future."

One example of the challenges from energy change is the world-leading growth in rooftop solar which generates so much power that demand from the grid in major cities is wiped out during the day, creating a headache for network operators in managing the constant baseload output from the old fleet of coal and gas plants.

Another challenge was co-ordinating plans between governments to ensure there was sufficient dispatchable power supply from gas, hydro and batteries to balance demand in the grid when there were fluctuations in wind and solar power, Ms Schott said.

Currently, energy generators and network operators have only been paid for supplying power to customers, but market design reforms already being rolled out through the ESB will create payments for storage services, system strength and frequency control.

"Major changes are needed to unlock value to customers and ensure capital investments are made in an efficient and timely manner to deliver the affordable, reliable and secure electricity consumers need," Ms Schott said.

The ESB was established by the Commonwealth of Australian Governments Energy Council in 2017 to advise on market transition, which requires co-operation among state and Commonwealth governments as they share responsibilities for networks and regulation.

Energy and Emissions Reduction Minister Angus Taylor agreed it was "critical" to act swiftly and manage the transition from coal to renewables.

Electricity prices are forecast to fall over the next three years as lower costs of gas and renewable energy drive a $150 drop in energy bills for a typical Victorian household and a reduction of $30 in NSW.

Australian Energy Market Commission said in December that gas prices are low due to reduced international demand for Australia's gas exports, and technological advances are driving down the cost of large scale wind and solar generation.