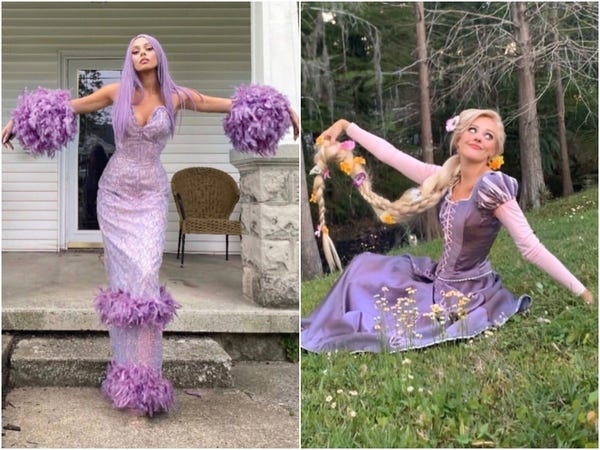 Micarah Tewers is a seamstress whose dressmaking tutorials have garnered millions of views on YouTube. 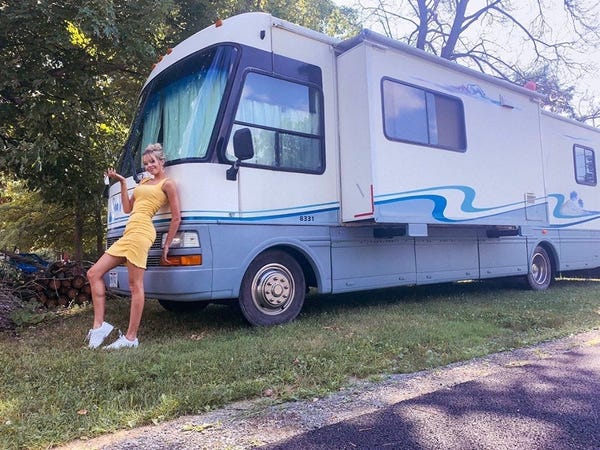 Tewers records her videos from her RV, where she lives with her bird, Gereon.

She's traveled cross-country in the vehicle, though it is currently parked in her father's driveway in Ohio, where she grew up.

Tewers taught herself to sew at the age of 15.

Tewers was homeschooled and told Insider that she didn't have much access to the internet growing up, but at age 15, she taught herself how to sew clothes.

She said that her eye for glamorous dresses, like Kylie Jenner's 2019 Met Gala dress, pictured above, inspired her to try and make them herself.

"I loved movies, especially ones with dramatic costumes, and I always loved fashion," Tewers said.

She started making dresses long before she created her YouTube channel, and it was only recently that her videos "blew up" on the platform. 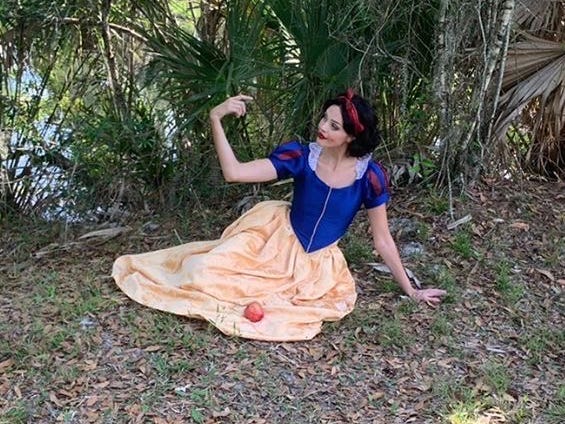 Tewers made her first DIY gowns before she started her YouTube channel in 2017.

In her early 20s, she worked at a craft store where she was surrounded by supplies that inspired her.

"I'd go home and work on something really elaborate, like a historically accurate 'Beauty and the Beast' dress, and nobody would ever see it — I did it just for the joy of doing it," she said.

However, one day she decided to start recording her work, and slowly her videos garnered attention. Earlier this year, videos on Tewers' YouTube channel received more than one million views.

Her dresses are all made from thrift-store finds, fabric that she buys online, or free materials that she finds around her house or outside. 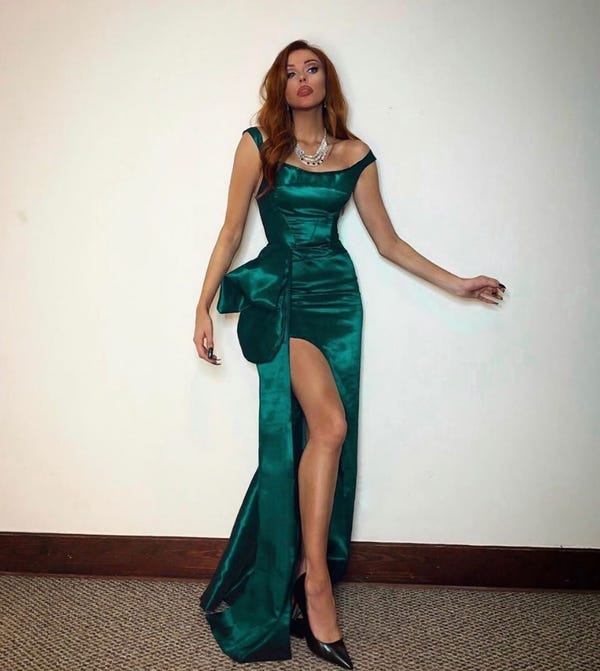 Tewers made an emerald-colored dress inspired by one that Kylie Jenner wore for a Christmas 2019 celebration.

The YouTuber used supplies worth a total of $20, including a bedsheet she bought from a thrift store and fabric she bought for $13 at Goodwill.

"I'm usually making stuff out of things you can find around the house, like curtains or an old bedsheet, and I think that appeals to a lot of people because you don't have to go anywhere to get it, and it's very cheap," Tewers said.

Tewers has always loved red-carpet glamour and says she loves the challenge of putting her own spin on celebrity styles. 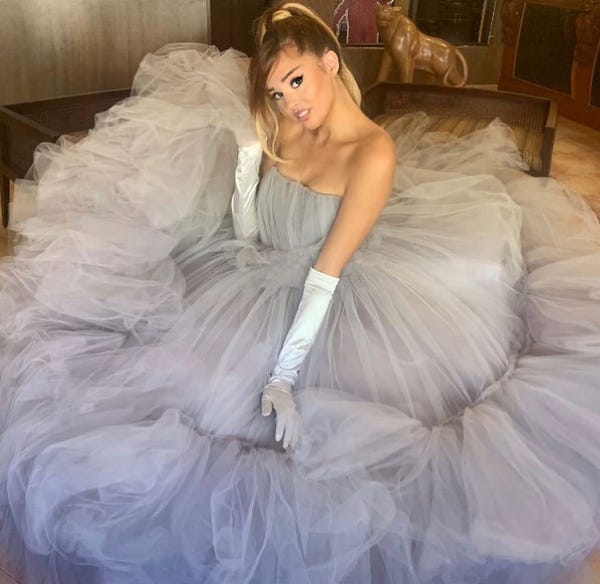 "I've always loved red-carpet glamour, and I figured where there's a will, there's a way to achieve Hollywood glamour for under $20," Tewers said.

Some of the dresses are more difficult than others and cost a bit more to make.

For example, Tewers said a gown she made inspired by Ariana Grande's famous giant gray tulle Grammys 2020 dress was a challenge. She used about 100 yards of fabric that all had to go through her sewing machine.

Some of the most difficult and time-consuming dresses to make are what Teweers describes as her historical gowns. 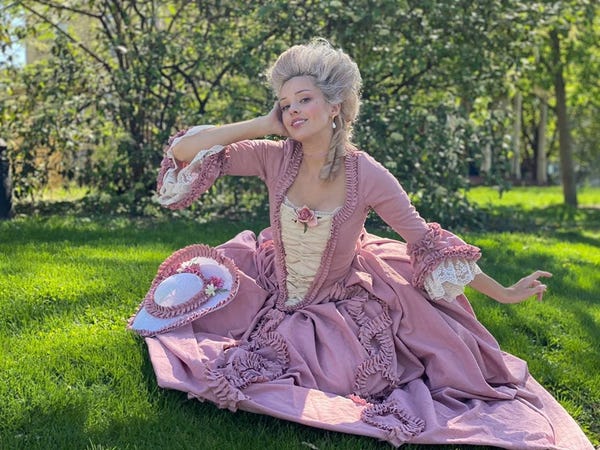 Historical dresses like the one above — which Tewers says is inspired by the time period of "The Prince and the Pauper" — are the most time-consuming garments to make, Tewers said.

To fit with the 18th-century time period, Tewers styles the dresses to be worn over specific undergarments, like hoop skirts and corsets, which she makes herself.

"I'll spend a little more time on the historical ones. Off-camera, I've once spent three hours sewing a hem," she said.

Tewers said that her red-carpet looks are easier because she allows herself to be more creative. 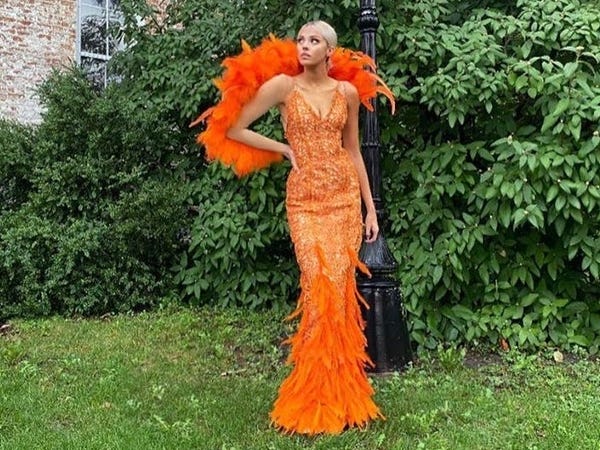 She was able to re-create Kendall Jenner's Met Gala dress from 2019, pictured above, fairly easily.

However, it was more costly than her typical gown — she spent between $40 and $50 — due to all the feathers.

When Tewers isn't crafting her garments by hand, she's editing her YouTube tutorials so viewers can sew their own dresses. 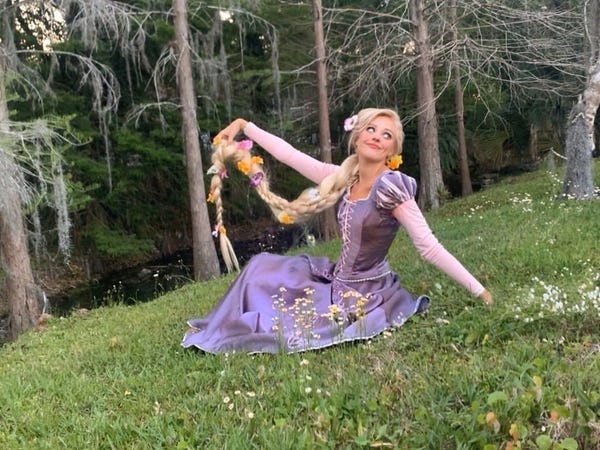 "Sometimes I'll spend 30 hours editing a video for a dress that took less than a day to make," Tewers said.

In addition to her dressmaking tutorials, Tewers also shares videos about what it's like living in an RV and crafting her garments in the compact space.

Tewers said she's had a lot of people interested in buying her garments, but she's too sentimental to sell them. 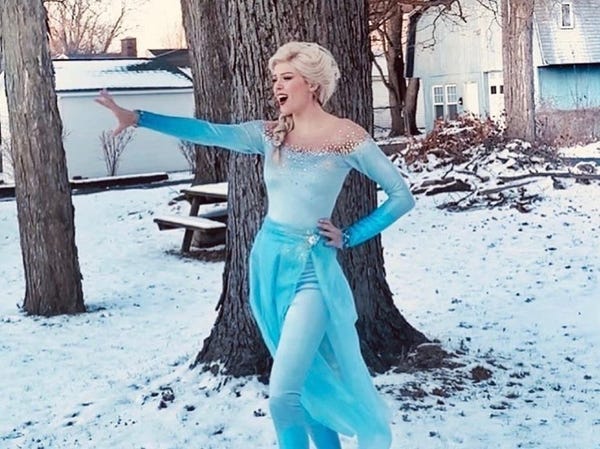 Tewers gets tons of comments on her YouTube videos from users asking if they can buy her gowns, but she says she doesn't think she'll ever sell them.

"I'm just so sentimental — I have a niece who is getting to the age where she'll be able to wear them, and my friend wore one of my dresses to prom, so I think to myself, 'If I just keep them I can continue to loan them out,'" she said.

"And if I have a daughter someday, what if she watches these videos and wants to try these things on? So I just end up hoarding them all," Tewers added.

Though Tewers' dresses may not be for sale, they can all be made by following her step-by-step tutorials on YouTube. 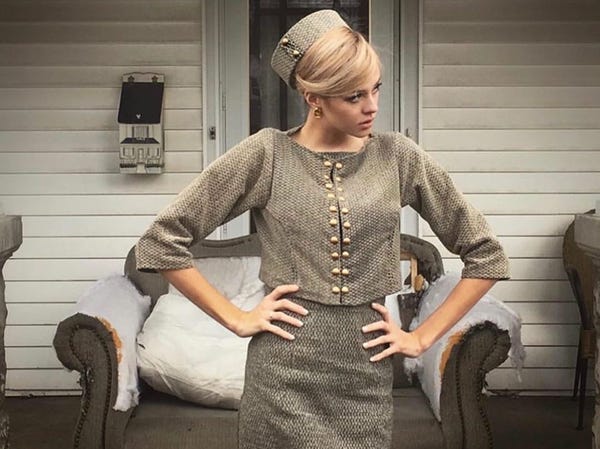 She's had plenty of followers who have re-created her looks by following her tutorials.

"It's so exciting when someone actually makes something. Most don't, and that's fine, but I love inspiring others to be creative," she said.

Check out her channel here.