Former Liberal MP Craig Kelly has joined Clive Palmer’s United Australia Party so he can access a war chest of funds to more widely share his controversial views over the handling of the coronavirus pandemic.

Mr Kelly resigned from the Coalition in February following criticism he had been sharing misinformation about COVID-19 and the treatments for the virus. He will now share his views on a national stage as the frontman for the United Australia Party and when he fights his NSW seat of Hughes. 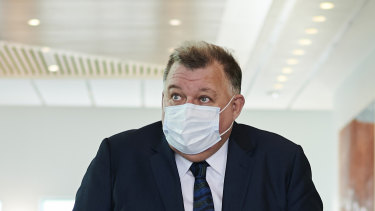 Craig Kelly has become the leader of the United Australia Party.Credit:Rohan Thomson/Getty Images

“The crude reality is that I’ll have greater resources [with the United Australia Party],” Mr Kelly said. In the last election, mining magnate Clive Palmer donated a record of more than $80 million to his party in a bid for federal parliament, with much of the money splashed on major advertising campaigns across newspapers, billboards and other media.

“I have been screaming this stuff from the rooftops for a long time. It’s very hard to get this message through,” Mr Kelly said.

“We have a huge war chest, we can run television commercials, ads, we can finance a proper campaign that no other minor party or independent can,” he said. Mr Kelly said his advertisements would be considered party political advertisements and in his view blocking them would be a breach of the constitution.

“I think it’s important that there’s more debate about the current policies and direction where the country is going,” Mr Kelly said, adding that both the Labor and Liberal parties seemed to broadly agree on lockdowns, masks and vaccinations.

“I think the policies are all flawed. I think they’re causing an absolute disaster across the country,” he said. “The single-minded laser-like focus on case numbers, it’s as though the nation has been hypnotised.”

He said there was not enough focus on the damage the lockdowns cause in comparison to the benefits of reducing hospitalisations and deaths, and not enough focus on treatments. This includes malaria treatment hydroxychloroquine and parasite treatment Ivermectin. Mr Kelly was banned from Facebook after posting about these treatments as the social media site’s moderators said this constituted a repeat violation of its misinformation rules. Australian health authorities do not recognise hydroxychloroquine and Ivermectin as treatments for COVID-19.

Mr Kelly also said the Doherty Institute modelling that national cabinet is using to plan the path out of the pandemic is “completely flawed” as it relies on the high efficacy rates of the vaccine. Mr Kelly said the reports underlying this modelling were “obscure” and better data shows much lower efficacy rates.

“Now we are in a society where if you have an alternate opinion then shut up,” he said. “The wonderful rich society we are today [came out of] debates and where someone is wrong you gain knowledge through the debate.”