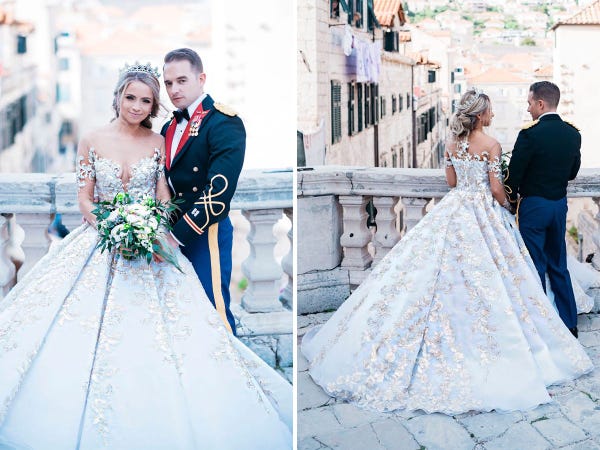 Janal Montagna and Aaron Kurincak met almost 15 years ago at the University of Miami. 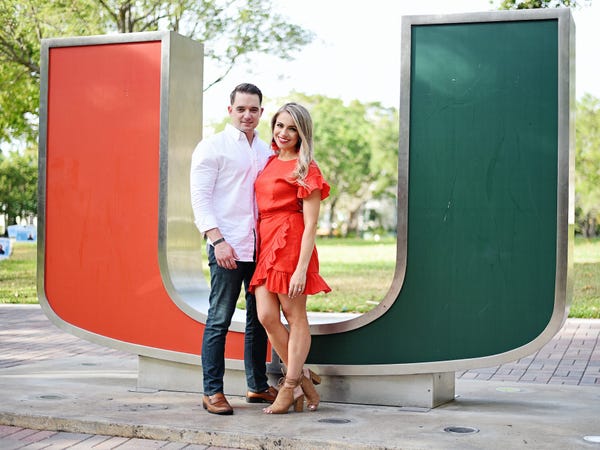 They lived across the hall from each other in their freshman dorm, and Kurincak caught Montagna's eye immediately.

The duo ended up connecting at Abercrombie, where they both worked. Kurincak asked Montagna to dinner, and they've been together ever since.

Kurincak joined the military as an officer after the couple graduated college in 2009, so they were in a long-distance relationship for a few years. 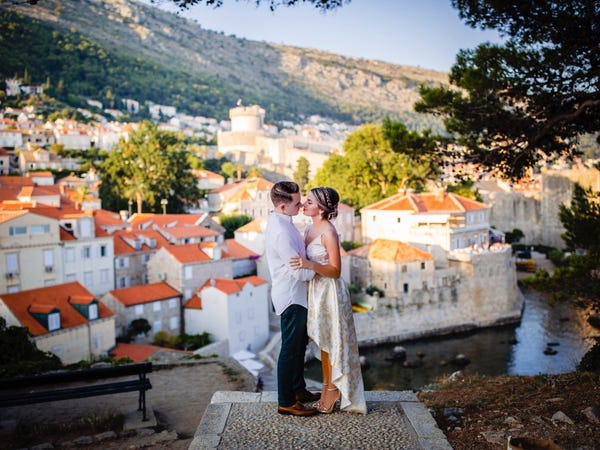 Kurincak proposed to Montagna at a rooftop bar in New York ten years after they started dating. They then moved to Charlotte, North Carolina, together, where they live today.

As the couple began to plan their wedding, they decided they wanted to get married in Croatia, both because of its stunning scenery and because one of their favorite shows, "Game of Thrones," was filmed there.

Montagna wanted her wedding dress to fit with that theme.

"I wanted something dramatic," Montagna told Insider of the wedding dress she envisioned for herself, but she was open to different styles. 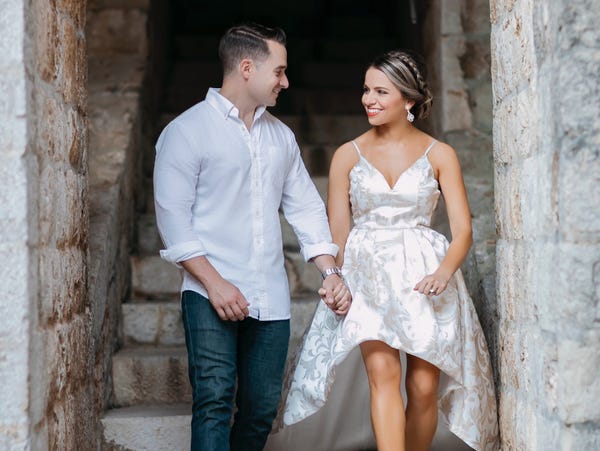 She could see herself in a form-fitting gown with a long train, as well as a dress with a larger skirt.

Montagna decided to go shopping for a wedding dress in earnest after they settled on Croatia as the destination. She flew to New York City with her bridesmaids, mother, and her sisters to find a gown.

She was buying her own dress, so Montagna set her budget at $5,000, including alterations.

Montagna wasn't in love with the look of the first gown she tried on. 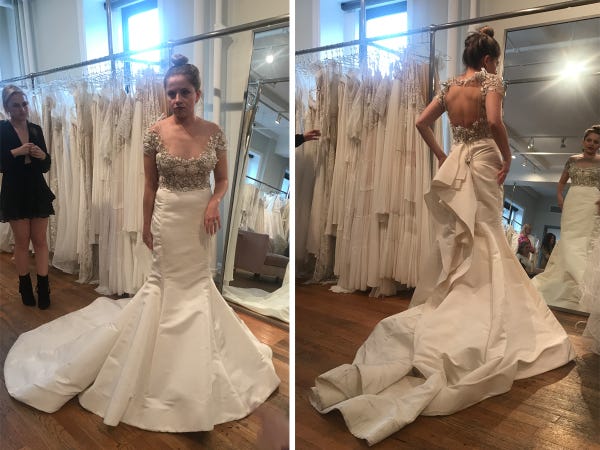 "This was a really stunning dress," she said. "That back and train is a showstopper. It kind of felt Old Hollywood and gave me a really great shape for my body, which is more petite."

"But I knew it just didn't hit the mark," Montagna said.

Montagna liked this gown, but it didn't feel like the right style for her wedding. 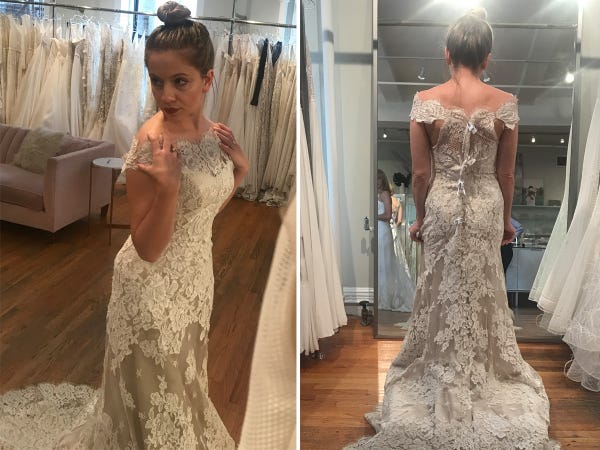 "This is such a timeless, romantic dress," she said, adding that she loved the off-the-shoulder look, but the lace was a bit too "country-chic" to make the gown a winner.

This gown was the right feel, but it still wasn't dramatic enough for Montagna's taste. 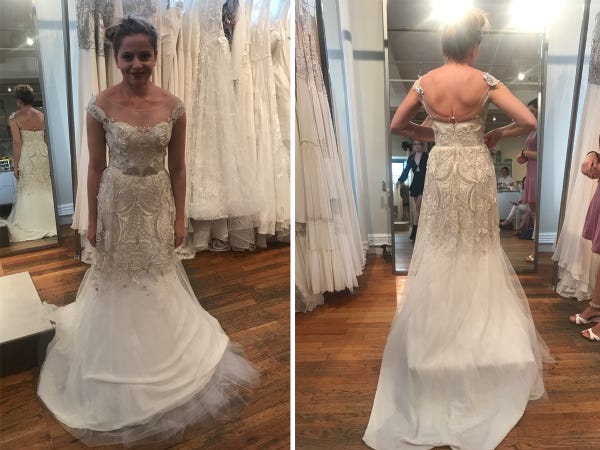 "This one was more along the lines of what I was looking for as far as the detailing and design of the beading," Montagna said. "I loved the cap sleeves and the illusion neckline."

Although it was closer to what she envisioned, it still wasn't right. "I wasn't a huge fan of the silver-colored detailing, and the bottom left a bit to be desired," she told Insider.

This tulle ball gown was another beautiful dress that didn't fit Montagna's vision. 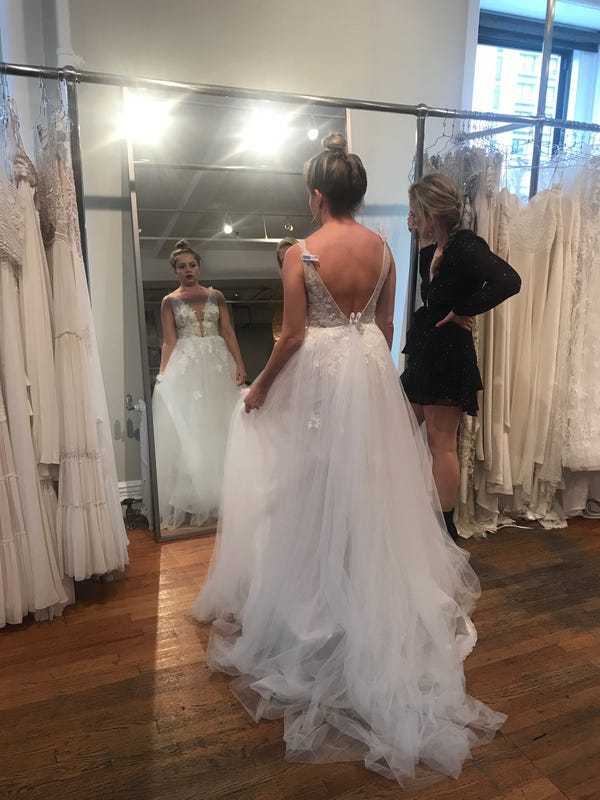 "I loved the bottom and the top on this one," she said. "It had more of a ball-gown feel I knew I was starting to lean toward. But it was too whimsical for the look I was going for."

Montagna liked the gold detailing on this trumpet gown. 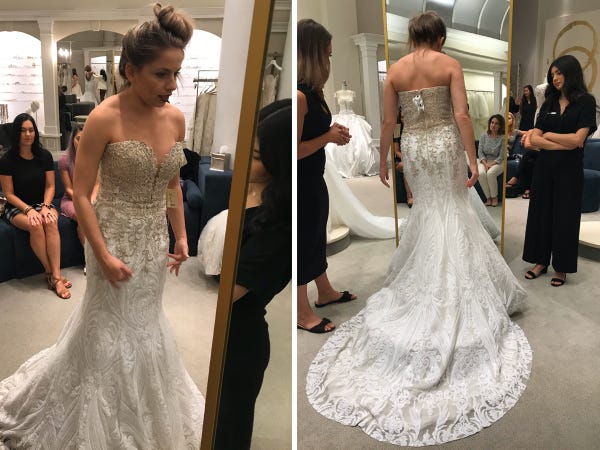 After striking out at the first few stores, Montagna and her posse headed to Kleinfeld Bridal for an appointment.

"This one was really unique, and I loved the ombré look with the gold detailing at the top giving away to the white," Montagna said of the dress. "The beadwork on the train was also beautiful."

"But it was just a little too simple for me," she added. "I wanted a more 'wow' moment."

This dress made Montagna feel beautiful, but it ultimately didn't fit her venue. 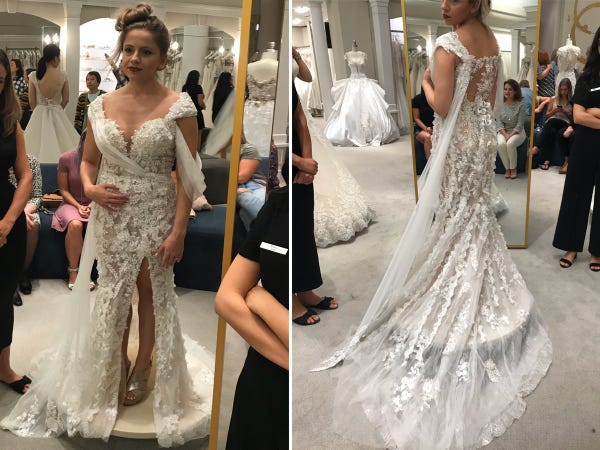 "This one was definitely a contender," Montagna said. "It made me feel like a Greek goddess."

"I know it would have been gorgeous once it was altered," she added. "There was so much beautiful texture and detailing."

But she ultimately didn't think the dress fit the "Game of Thrones"-inspired event she was organizing. "I felt like it would have been a great dress if we were married in Greece, but not quite a fit for the old-world vibe I was going for in Croatia," she said.

So she kept looking.

The classic shape of this gown was a hit. 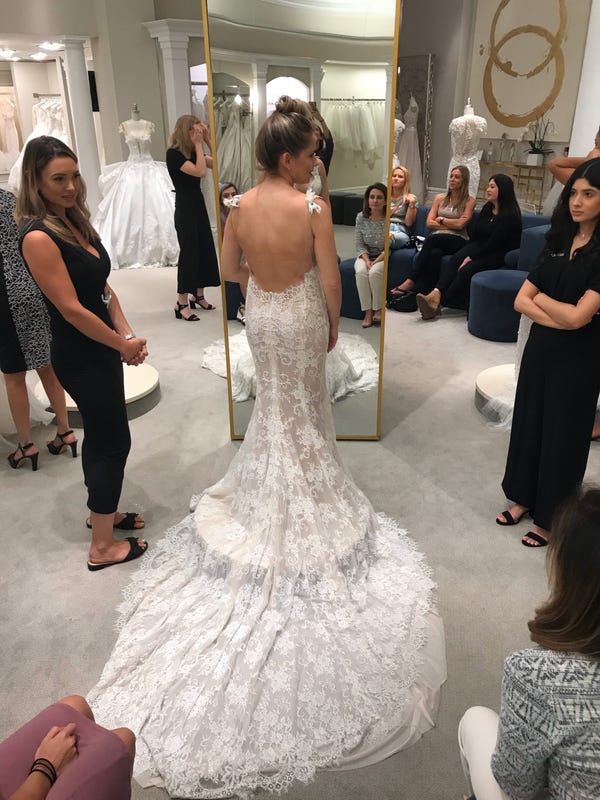 "I think this dress was the dress that everyone thought I would be in: form-fitting, and a low back with a long train," Montagna told Insider. "I liked this lace one much better than the first lace dress I had tried on."

"I could have easily dressed this one up with accessories and the veil, but it just wasn't it," she said, as it felt too simple.

The flowing sleeves drew Montagna to this gown. 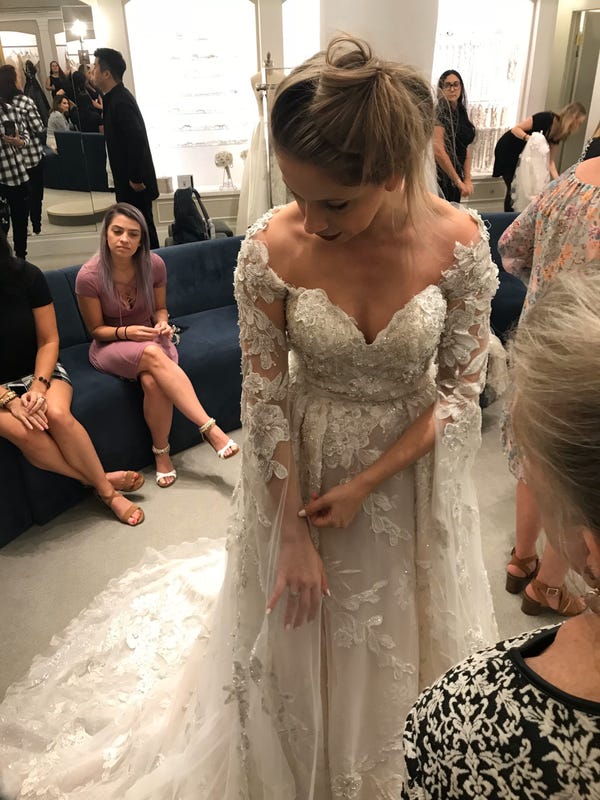 "This dress was the runner-up," Montagna said. "It was giving me a bit of the European queen vibes I was looking for, and it was unique enough to be something that not everyone has seen before."

"The sleeves alone almost sold me, but I still wanted to tweak some things on the dress if I had decided on this one," she added.

But she didn't want to have to alter her dress too much, so even though the gown checked most of the boxes for her, Montagna kept shopping.

As soon as Montagna saw this Ysa Makino dress, she knew it was the one. 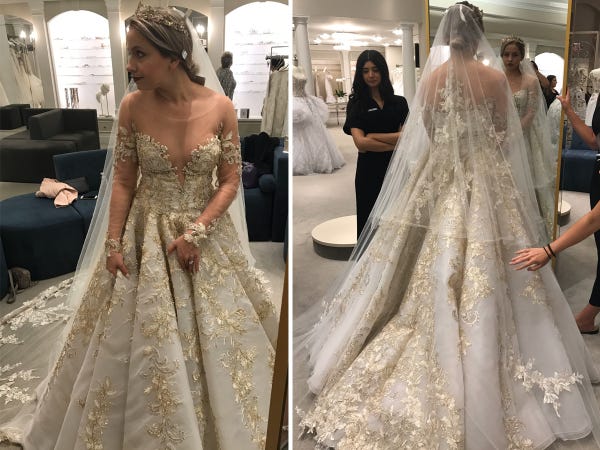 "It caught my eye because of the sleeves and the color," she said of the Ysa Makino dress, which was only at the store for the weekend because of a trunk show. "As soon as I touched it on the rack, I had a good idea it was the one. It was so heavy, and the beading and detailing were exquisite in person."

But she was hesitant to try it on because of how intricate the dress was. "I figured it was out of my budget," she said. It turned out to be around $5,900, so she decided to try it on since it was only $1,000 over her budget.

"As soon as I put it on, I knew it was it," Montagna said of the gown.

"It was everything I didn't even know I wanted and needed in the most important dress I would wear," she said. "The royal feeling, the floral work, the beading, the ball-gown silhouette, the sleeves, and that gold color just made me think Croatia."

"It was so different and contemporary, but so classic all at the same time," Montagna said of her gown. 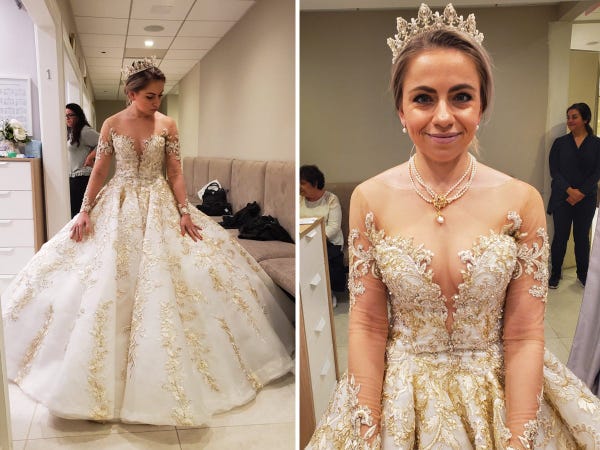 The dress also turned out to be less expensive than she thought it would be, as Kleinfeld Bridal has a military discount.

Montagna also didn't have to alter it much at all. The train was shortened a bit since she's petite, and the final dress had more layers of crinoline under it to make it look more like a ball gown.

With the added layers, the dress weighed 35 pounds.

Montagna decided to purchase a separate dress for her reception that was easier to move in. 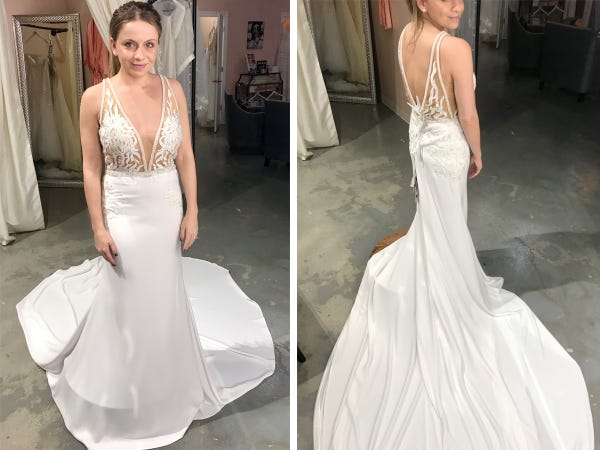 "I wanted something unique for the reception, but more form-fitting and sexy that was a different look from my first dress and that I could bustle and dance in," Montagna said.

She chose a backless L'amour by Calla Blanche gown, which had a trumpet skirt and swirling details on the transparent bodice.

"The fabric was a heavier crepe, so it still had the expensive and luxurious feel I was wanting, with a unique pattern that complemented my first dress and the setting," Montagna said.

She bought the gown at Savvy Bride Boutique in Charlotte, North Carolina, and it cost just $1,000 during a special boutique sale.

Montagna wore a long veil to the ceremony. 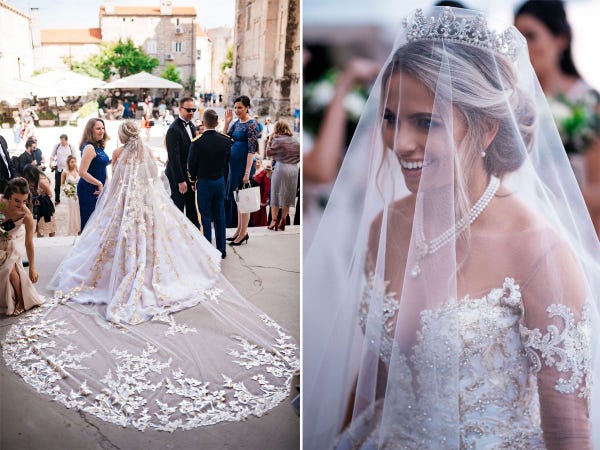 Montagna fell in love with the Rita Vinieris veil when she tried it on at Kleinfeld, as the gold detailing matched her dress perfectly.

But it cost about $1,000, so she wasn't sure she could get it. Her mother-in-law ended up buying it for her as a wedding gift, allowing her to have the look she wanted.

"That was super sweet of her to step in and get me the dream veil that went with the dream dress," Montagna said.

Montagna also wore a crown with the dress to make it even more dramatic.

The dress had a sheer lining underneath the heavier corset. 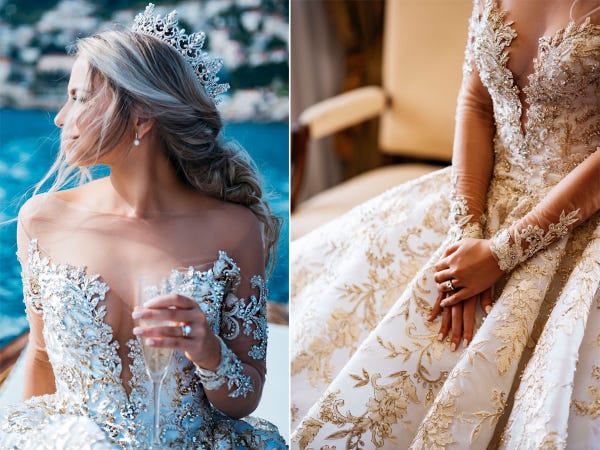 The lining ensured the dress didn't fall off, and it allowed for the beautiful detailing on the sleeves that look as though they're almost part of Montagna's skin.

But the sheer fabric made Montagna nervous during the alterations process.

"It's a very delicate process for them to alter it without showing too much of the stitching," she said. But the sleeves fit perfectly after they were altered.

Montagna needed some help getting around in the big gown. 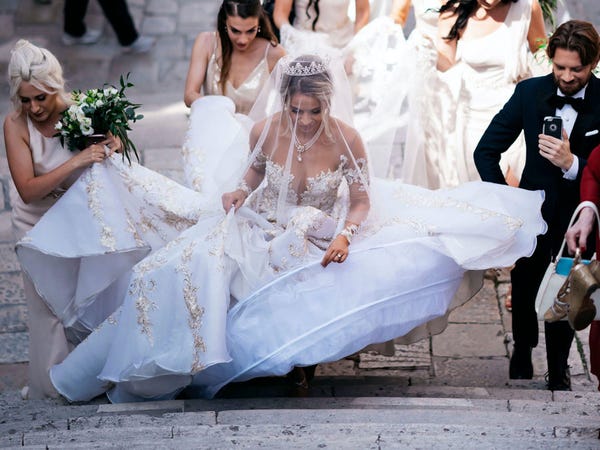 She had to walk up a large flight of stairs to get to the wedding ceremony, so her bridal party helped her carry the dress.

Montagna said the experience reminded her of a scene from "Game of Thrones" in which Cersei Lannister walks up a similar flight of stairs.

"It was magical," Montagna said of how she felt in her wedding dress. 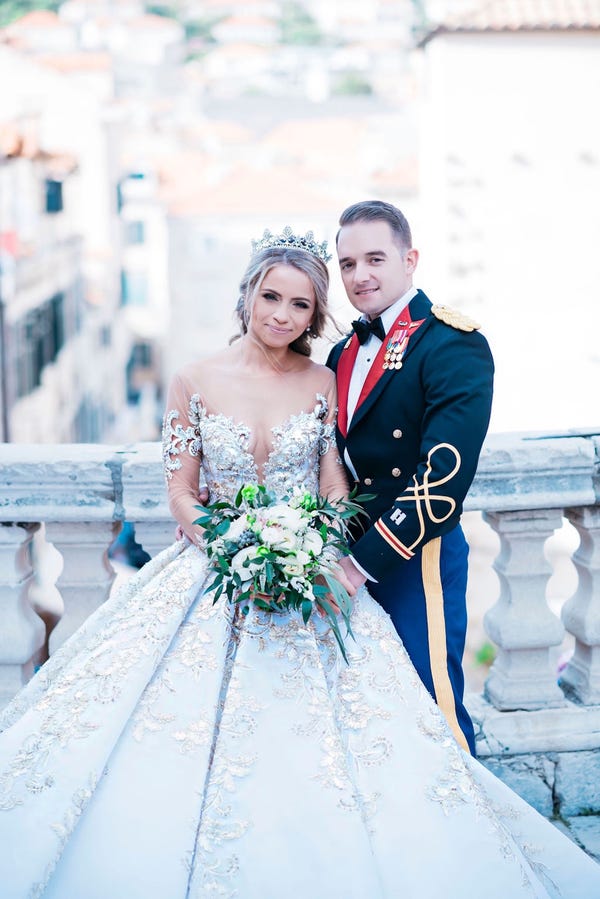 "I felt like an absolute queen," she said. "It was just amazing."

Montagna and Kurincak had a first look at the villa they were staying at before the ceremony. 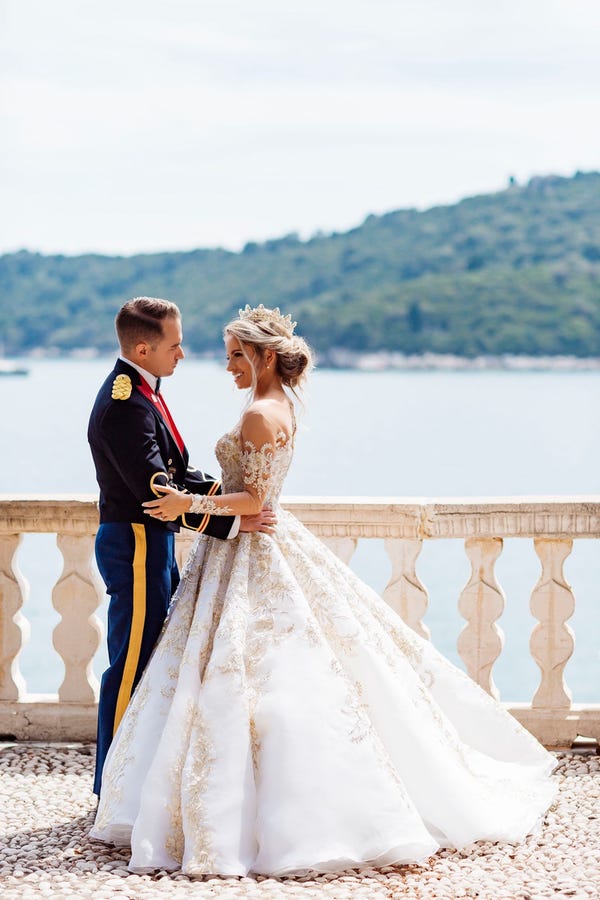 Montagna didn't always plan on doing a first look, but she's glad she did.

"The first look really is worth it just because you're not as stressed and you get those pictures in between," she told Insider.

That intimate time with a partner is one of the few quiet moments of a wedding day. 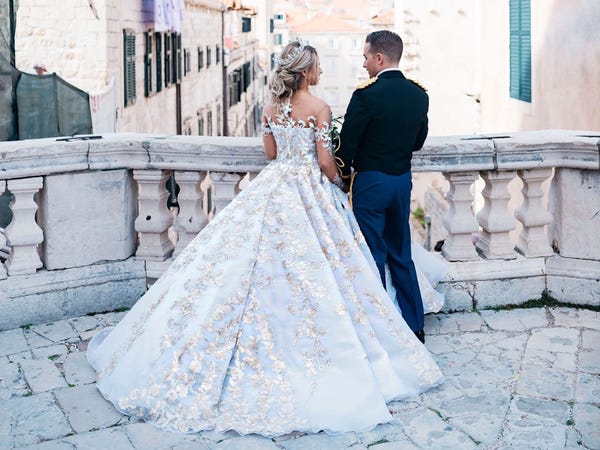 The couple got married in Dubrovnik, Croatia, which has an old-world charm.

Montagna's gown was unique in its detailing, but the classic shape complemented the timeless surroundings.

Montagna was glad she changed into a slimmer dress for the reception. 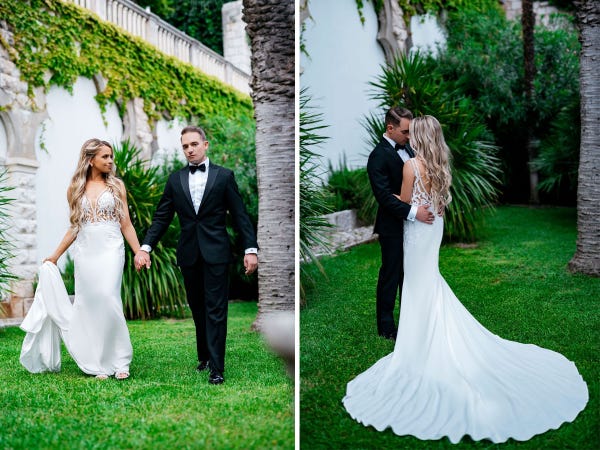 "I wanted that sleeker look for the reception," Montagna said. "But I actually loved that it still had a dramatic train so that I could take pictures when we changed and then bustle for the dancing."

Kurincak also changed for the reception, wearing a tuxedo instead of his military ensemble.

Montagna recommends brides do their research on boutiques before they go shopping. 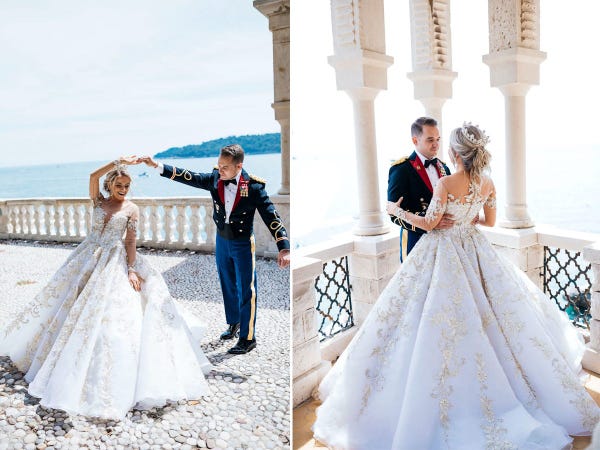 She called the boutiques before her appointments to ask about the types of dresses they carry, online samples, and also the typical price range of gowns at each store.

Montagna also thinks it's a good idea to casually try on gowns before you go to seriously buy. For instance, she went to a few boutiques in Charlotte before she went to New York so she could get an idea of what silhouette worked for her.

The experience was helpful for her, as Montagna was surprised she liked ball gowns after she went shopping. "When I put them on, I just felt more like myself," she said. "I knew it needed to be unique and not just your run-of-the-mill ball gown." 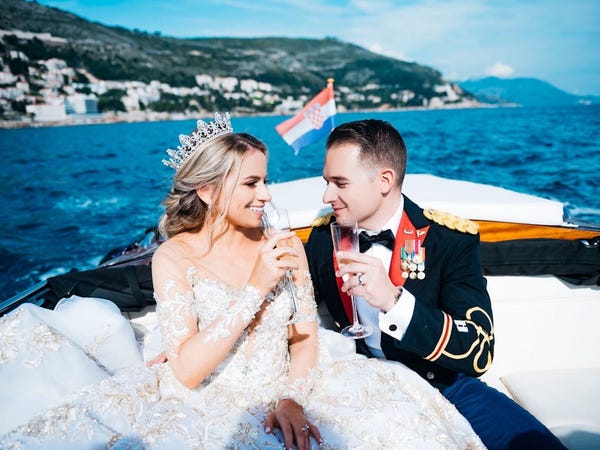 "He surprises me a lot," she said. "I have enjoyed seeing him grow into who he is."

"We definitely started very passionately and had young love, but I think we've grown into such a mature relationship. I feel like that's really special," she said.

"We've been through a lot together," Montagna said. 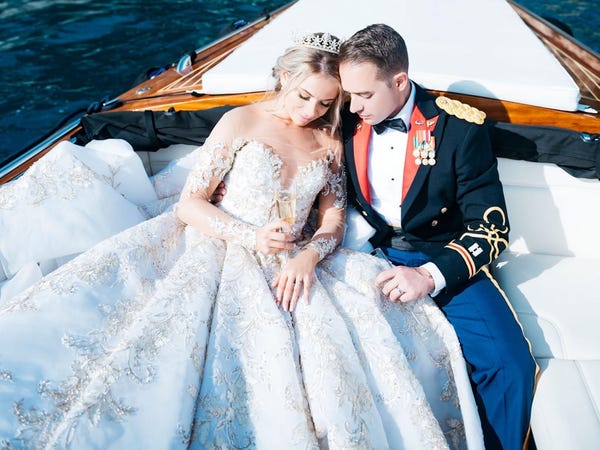 The couple met when they were 19, and they're both turning 34 this year.

"It's just wild to be together for that long and go through so many of those life changes," she said. "We're able to get through anything at this point."

If you are in the process of shopping for your wedding dress or have photos from when you shopped and want to talk to Insider for a story, get in touch at [email protected]