Jennifer Lopez is wearing them, Kylie Jenner and Rashida Jones are promoting them, and Drew Barrymore is selling them. Blue-light glasses are shaping up to be the accessory of our prolonged screen-mediated moment. But do we need them?

Blue-light glasses are fitted with lenses that filter out certain light waves that are emitted by the sun and, to a lesser extent, by digital devices like phones, laptops and tablets. Blue light is not inherently bad; it boosts attention and wakefulness during the day. But it suppresses the natural production of melatonin at night.

Scientists, however, are not convinced that the glasses are a worthy investment.

“Whichever aspect you look at, it’s very hard to justify spending the extra money,” said Dr. John Lawrenson, a professor of clinical visual science at City, University of London. (Prices vary but start at around $20.) After reviewing several studies that tested the effectiveness of blue-light-blocking lenses, he and his colleagues concluded that the glasses are not necessary.

Digital eye strain is real, but it’s impossible to say with certainty that the culprit is blue light. “No one has established an independent causal association between blue light coming from the computer and visual symptoms,” Dr. Lawrenson said. He recommended going to an eye doctor for a checkup instead of rushing to buy nonprescription glasses.

Regardless, the blue-light category is booming. A quick Google search pulls up several brands that almost exclusively sell “computer glasses” (like Felix Gray, which raised more than $1.7 million in funding in 2020, bringing its total funding to $7.8 million as of September, according to PitchBook), as well as prescription-eyewear companies like Zenni (which sold two million pairs of its Blokz lenses in 2020, according to the company) and Jins (which noted an uptick in online orders last year). If you’ve shopped at Warby Parker recently, you were probably asked if you’d like a blue-light filter added to your lenses.

“As many customers started working from home last year, we have seen a significant rise in demand for these lenses,” Neil Blumenthal, a chief executive of Warby Parker, wrote in an email. “Last April, we saw a sizable increase specifically for nonprescription blue-light-filtering lenses and we’ve seen this trend continue throughout the pandemic.” 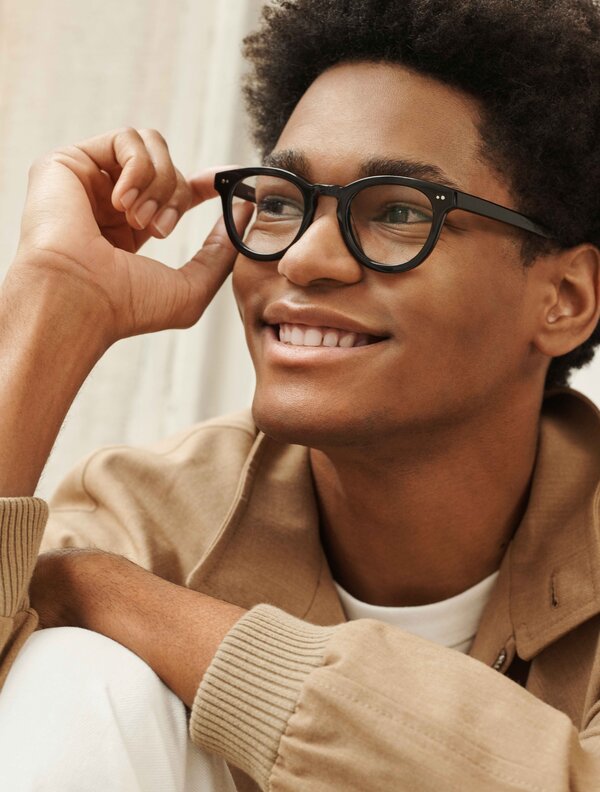 The amount of blue light that our devices emit is too small to be a serious risk, said Dr. David Ramsey, a retina specialist at the Lahey Hospital & Medical Center in Massachusetts. Our eyes take in significantly more blue light outside than inside, even when it’s cloudy. To get a sense of scale, Dr. Ramsey suggested taking one of your devices out on a bright day. “How many of us have been on the beach with our laptop or our cellphone and been impressed just by how hard it is to read the screen?” he said.

The idea that blue-light glasses can protect the retina from damage is so unfounded that in the United Kingdom, Boots Opticians had to pay a fine of 40,000 pounds, or about $56,000, after making “misleading and unsubstantiated” claims on the topic.

One study of 5,000 eyes analyzed what happens when a blue-light filter is added to a synthetic lens that is implanted into the eye after a cataract surgery. The authors found no conclusive evidence that the filters were beneficial in any way. The American Macular Degeneration Foundation has explicitly stated that “there isn’t much evidence to support wearing blue-light-blocking glasses for daily electronics use.”

If eye strain is your concern, consider stepping away from the screen now and then. “Using our computers for long periods of time may lead to eye strain. It’s important to take breaks,” Dr. Ramsey said. “That has little, if anything, to do with blue light.”

As for sleep, exposure to blue light does suppress the production of melatonin, which makes people feel sleepy. That is why we tend to be awake when the sun is shining and feel more tired as it sets. Limiting exposure to blue light at night could help maintain that dichotomy. But rather than putting on blue-light glasses before bed, try putting your phone away an hour or two ahead of time. After all, studies have shown that screen time can negatively affect sleep for a variety of reasons.

Sleep experts also recommend exercising, not eating dinner too late, having a before-bed routine, and cutting back on news and social media in the evening — good advice for anyone, especially these days. “Sleep hygiene is so important,” Dr. Ramsey said. “Our behaviors around going to sleep are just as important if not more important than our exposure to blue light.”