There was a time when Alexander Wang threw the wildest and weirdest parties of New York Fashion Week. He built adult playgrounds inspired by carnivals and frat houses, catered by Hooters and McDonald’s, hosted at gas stations and filled with pole dancers, where uninhibited celebrities took home rolling papers as party favors.

Today the designer is at a crossroads. A number of people have accused him of sexual misconduct, often at parties or nightclubs. Most of the claims were made anonymously on social media. Now, the high-profile victims’ rights lawyer Lisa Bloom told The New York Times she is representing 10 men with allegations against Mr. Wang and his company.

Mr. Wang has promised to defend his reputation vigorously, calling the allegations lies — “baseless and grotesquely false” in a statement released on New Year’s Eve.

So far no legal action has been taken by Ms. Bloom or Mr. Wang.

“I never engaged in the atrocious behavior described and would never conduct myself in the manner that’s been alleged,” Mr. Wang said in the statement. 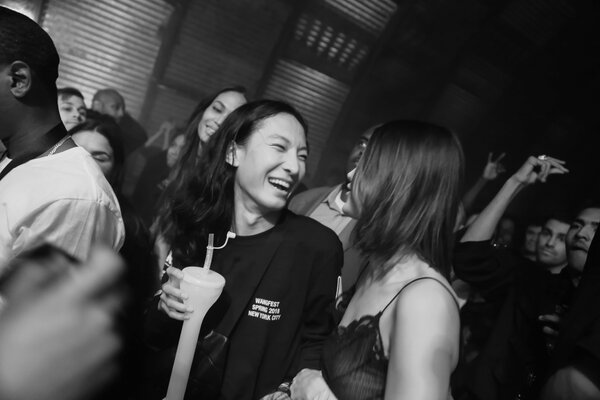 Mr. Wang has since gone quiet, hiring at least two high-profile lawyers of his own, Eric M. George and Andrew B. Brettler, while continuing to oversee his company. On Feb. 12, for the first time in six weeks, the official Alexander Wang Instagram account posted something new to its feed: an animated video celebrating the Lunar New Year.

That post came a few days before the start of New York Fashion Week, which Mr. Wang, 37, hasn’t participated in since 2018.

Mr. Wang made his runway shows into democratic, public experiences and built a fashion empire around partying. With $350 T-shirts and ripped denim, he outfitted Manhattan’s cool kids; his entourage, the Wang Gang, was staffed with waiflike and disheveled women, rarely seen without their smudged eyeliner and Alexander Wang leather jackets.

“He was always known as very personable and professional, and also a big partyer — but look, that’s normal for fashion,” said the fashion publicist Kelly Cutrone. “It is considered pretty normal after fashion week to pound to the ground, with very, very, very late nights.”

The accusations against Mr. Wang come at a moment when people seem to have more license to speak up about mistreatment and harassment. The style of partying he and others in fashion were known for is no longer universally celebrated, but instead is often interrogated as a playground for predatory behavior.

The 10 men represented by Ms. Bloom include David Casavant, a 30-year-old fashion stylist and fashion archivist who occasionally worked with Mr. Wang professionally and also encountered him socially at parties and clubs.

In January 2017, Mr. Casavant was at the Good Room, a Brooklyn club when, he said, Mr. Wang approached him and pulled down his pants and underwear. A friend standing next to Mr. Casavant confirmed the incident to The Times.

“I was so apparently in a vulnerable state,” said Mr. Casavant, who was drunk at the time and believed Mr. Wang’s intention was to “humiliate” him; he also accused Mr. Wang of trying to undress him on earlier occasions at a club. “Even if it’s at a party late at night, I don’t think that’s normal behavior.”

According to a letter to The Times from Mr. George, one of Mr. Wang’s lawyers, the designer denied ever pulling down Mr. Casavant’s pants and underwear.

That letter attempted to discredit Mr. Casavant and said he had an “irrefutable yearslong personal animus toward Mr. Wang.” Two examples of that animus, the letter said, include Mr. Casavant once accusing Mr. Wang of “ruining Balenciaga,” and Mr. Casavant once, at the Good Room, invading Mr. Wang’s booth and refusing to leave.

Ms. Bloom, Mr. Casavant’s lawyer, said in response: “Mr. Casavant stands by his account. Mr. Wang’s ridiculous personal attacks on him say more about Mr. Wang than they do about him.”

In late December, Mr. Casavant watched as stories about Mr. Wang’s partying circulated on social media. Most were anonymous, amplified by Diet Prada and another Instagram account dedicated to exposing the inner workings of the modeling industry.

But other accusers identified themselves. On TikTok, Owen Mooney, a model, accused Mr. Wang of groping him at a club in 2017. Gia Garison, another model, told The Guardian that the designer tried to pull her underwear down at a club in the same year.

In his letter, Mr. George said Mr. Casavant’s claims were “preposterous” and had been “copied” from Mr. Mooney’s statements.

Mr. Casavant decided to publicly come forward after Mr. Wang issued his New Year’s Eve statement, in which he said, “seeing these lies about me being perpetuated as truths has been infuriating.”

“I didn’t like the idea that people could be branded as liars who weren’t,” Mr. Casavant said. “I didn’t feel a necessary response from the fashion industry about it. Which I can understand — I get it, they were mainly anonymous, so that’s fine. But here I am. I’m sitting in front of you. I’m saying who I am. I’m not anonymous anymore.”

In the late aughts, Mr. Wang led a new wave of energetic talent in New York fashion. He was often mentioned in the company of other emerging Asian designers of diverse backgrounds, including Joseph Altuzarra, Jason Wu and Prabal Gurung. Of the group, Mr. Wang’s line was the most commercially embraced, and intentionally so: He provided the official uniform of the glamorous party girl.

He was also championed and mentored by powerful women in the fashion establishment, like Anna Wintour and Diane von Furstenberg.

He “had strong financial foundations, unlike many of his peers,” said Gary Wassner, an early investor in Mr. Wang’s business. “He had what it took to be an international phenomenon. And he understood that his success lay in creating a cool, edgy and youthful world to which everyone felt like they were invited.”

In 2012, he was named creative director of Balenciaga, among the most high-profile recruitments of an American to lead a revered European fashion house since Tom Ford and Marc Jacobs were hired by Gucci and Louis Vuitton in the 1990s.

In 2015, he left, after just six seasons, returning to his namesake label full-time. Since then, there has been a revolving door of chief executives at the Wang label — including when Mr. Wang himself replaced his sister-in-law in 2016.

His original party girl muses, like Vanessa Traina and Zoë Kravitz, had grown up; some had started families and cut down on their all-nighters. Some people inside his company thought the brand should mature past its wild-child image, too — past the headlines about a topless Miley Cyrus attending a Bushwick warehouse party hosted by Mr. Wang, or ad campaigns starring R. Kelly, currently awaiting trial for racketeering and child pornography charges.

Fashion has its share of #MeToo stories, with many revolving around photographers, not necessarily designers. But some people, including Ms. Cutrone, believe that the industry, notorious for enabling bad behavior, continues to lag other industries in addressing its failings around sexual misconduct.

“I am actually surprised at how quiet fashion continues to be in its response to so many allegations,” she said. “It’s a profession where boundaries are very blurred.” She noted that fashion brands still use vulgar sexual terms to describe certain looks, and that “people turn the other way.”

Retailers like Nordstrom and Net-a-Porter, which carry Alexander Wang clothes, declined to comment on their buying decisions. A spokesman for Mr. Wang’s company declined to provide any recent sales or store figures or to disclose when the next collection would be released.

For years, high-profile luxury brands have frequently had to address misconduct and offensive behavior by their designers and owners, like racism at Gucci and Dolce & Gabbana, or an anti-Semitic rant by the designer John Galliano. So far, the outrage that follows, stinging as it is in the moment, rarely seems to damage a company’s bottom line.

“Scandals can certainly uproot a brand,” said Julie Gilhart, an industry consultant and the former fashion director of Barneys New York, where she stocked Mr. Wang’s earliest designs. “That doesn’t mean they can’t be replanted.”