It is an uncomfortable reality of the modern communal spectacle that more often than not, when it comes to a major award show or performance extravaganza or even sporting event, marketing has overwhelmed personal expression — at least when it comes to the clothes. Red carpets are a big business for public personalities, and fear of looking silly an equally powerful deterrent. Brands have swooped in to exploit that tension to their own ends.

We wrote off the Oscars years ago, but when even the MTV Video Awards and the Olympics become hashtag opportunities for Valentino, Giambattista Valli and Ralph Lauren (among many, many others), you know we’ve reached peak fashion penetration.

Which is why Eurovision 2021, that no-holds-barred mash-up of emotion, inanity, genres, nationalities, wind machines, bursts of fire and just plain weirdness, was such a joy to watch.

The hosts didn’t just use “Open Up” as their official slogan and then open the arena in Rotterdam to thousands of people (thousands of people! in one room! yelling and dancing!). They opened up the stage to a parade of ridiculous outfits that were nevertheless worn with so much exuberance it was a great reminder that sometimes just the freedom to express your own taste should be the goal. 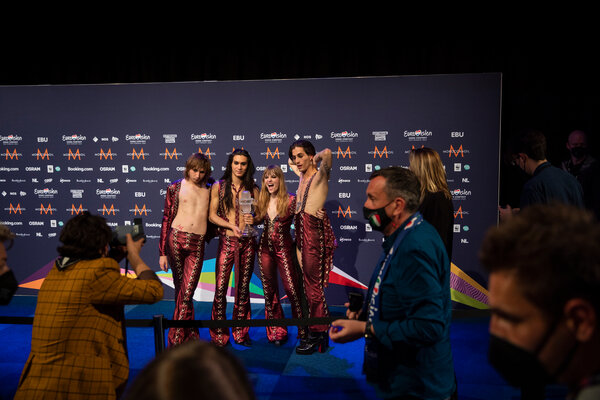 The sheer fact that Italy’s Maneskin, the winner of the whole shebang, actually worked with a big-name designer and no one would ever know because the rock band’s identity completely overshadowed the fashion brand, is symptomatic of what makes Eurovision special. And, increasingly, unique.

That designer — Etro — is, after all, an Italian family-run brand that has made a signature out of a certain boho deluxe aesthetic, most often expressed in floaty paisley fabrics and a sort of sand-swept romance. Yet there Maneskin was, doing their very energetic best to revive the whole idea of glam rock in laminated laced-up leather flares and studded leather jackets, and gold-speckled poet’s sleeves. It did make you think Jimi Hendrix-meets-“Velvet Goldmine,” but it didn’t make you think “Milan Fashion Week.”

That’s actually all to the good. Indeed, by the end of the show, it was hard not to wish that along with the winning song, viewers had gotten to vote for the winning outfit. After all, the two are fairly intertwined.

If Italy won the competition, for example, Vegas-style silver clearly won the night. Spangly, abbreviated shine was the go-to performance look, as seen on Anxhela Peristeri from Albania (in a high-necked steel-sequined leotard with icicles of sparkles dripping from her hips and shoulders); Elena Tsagrinou from Cyprus (in some sort of halter neck bikini confection with crystals and beading); Destiny from Malta (silver fringe-y minidress); and Natalia Gordienko from Moldova (long-sleeved plunge-neck bodysuit with — yup! — more silver fringing).

Apparently, their costume designers had all watched last year’s satire, “Eurovision Song Contest: The Story of Fire Saga,” and been inspired to take it literally.

Though the bright yellow outfits of Lithuania’s the Roop, which combined shoulder pads, jumpsuits, and schoolgirl pleats and called to mind the early days of MTV, not to mention both New Wave silhouettes and sunny-side-up eggs, were equally hard to forget. There’s a reason that they caught the eye of supporters in Vilnius, who according to a local government blog enlisted MK Drama Queen, the brand that created the costumes for the Roop to help dress local statues in bright yellow accessories as a form of home-country boosterism.

When it came to camp, however — which is, after all, the signature aesthetic value of Eurovision — no one beat Norway’s Tix. His giant white fur and even more giant white wings took his crystal-studded silver bodysuit to a whole different level, as did the silver chains that bound him to both the Earth (and a couple backup demons gyrating nearby), the better to evoke the point of his song, “Fallen Angel.”

Speaking of angels, feathers were also a key component of the look from San Marino’s Senhit along with a giant gold headdress (along with Flo Rida, who joined her onstage). Which was only outdone in the “how-in-the-world-do-you-move-in-that?” sweepstakes by Russia’s Manizha, who made her entrance in the robes of what looked like a giant matryoshka doll only to answer the question by emerging in the freedom of red coveralls to illustrate the theme of her song, “Russian Woman.”

You couldn’t help but smile at it all, which is the point. Fashion is supposed to be fun. It’s supposed to make you feel good. That’s something everyone needs. That Eurovision hides that under a bushel of kitsch doesn’t make it any less true.

Little wonder no one could muster up any enthusiasm (or votes) for England’s James Newman, who donned a … plain leather coat for his number. One of the takeaways of Eurovision 2021 should be that Coco Chanel’s whole “elegance is refusal” stance doesn’t really work in this context. Except, perhaps, when it comes to France’s Barbara Pravi, who took to the stage in a simple black bustier and black trousers to croon her song “Voilà,” winning a rapturous reception from her home market and coming in second in the jury vote.

Given the plaudits, it was hard not to wonder — with a bit of a sinking heart — if, say, a Dior ambassadorship might be in her future.