Raven Sutton, a dancer and American Sign Language performer, stayed up for the midnight release of “WAP,” the raunchy hit by Cardi B and Megan Thee Stallion. Ms. Sutton, who is deaf, then spent several hours translating the English into A.S.L., figuring out what signs to use and practicing her flow to match that of the artists’.

“The song is very hype,” said Ms. Sutton, 26, from Riverdale, Md. “Women empowerment, being proud of your body, all of that. So I’m trying to figure out in my interpretation, how do I want to express that? I want to be sexy. I want to be able to move my body and show exactly what they’re talking about.” (The interviews between the deaf subjects in this story and the reporter were conducted over video calls on Google Meet with an A.S.L. interpreter.)

Ms. Sutton, who later posted her interpretation on social media, is part of a growing community of Black deaf content creators who aim to educate people about deafness, highlight their own community and make music more accessible to deaf audiences.

This work doesn’t come without challenges, including a common misunderstanding that deaf people can’t enjoy music. They can, largely through vibrations and interpretations.

That misconception can lead to problems ranging from basic logistics — remembering to book interpreters for concerts and other live events — to more knotty issues like ensuring that the interpreter has a cultural background that will inform their translation.

“We don’t just get some interpreter who might be able to do it, but someone who is culturally competent,” said Rorri Burton, the founder of Pro Bono ASL, a group of BIPOC interpreters; Ms. Burton also did the A.S.L. interpretations of the interviews for this article, translating the questions and answers between the deaf subjects and the reporter.

“When you’ve got someone like Megan Thee Stallion, someone in hip-hop, you’ve got these Black artists, doing Black music, using the N-word, for example,” Ms. Burton said. This becomes a problem when the interpreter isn’t Black, especially if a white interpreter signs it.

And while Black deaf creators often come up with new, inspiring interpretations, white hearing interpreters are frequently in the spotlight.

Recently, Kelly Kurdi, a hearing interpreter in Houston who is white, went viral for her expressive interpretation of “WAP” at Lollapalooza, which amassed over 14 million views on TikTok in one week. She was “doing more than the backup dancers,” read one comment on the video. Another commenter wrote, “she KNEW the assignment.” 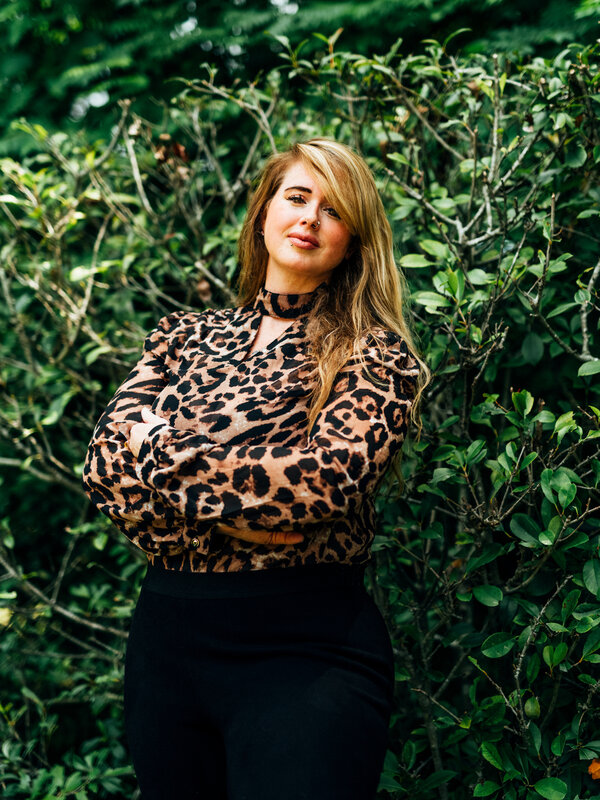 Though the response online was largely positive, Ms. Kurdi said she “recognizes privilege and how people perceive things.” She added: “I love seeing deaf people in the audience. I love to see them having a great time and providing access to them, that’s all really cool. But I also recognize why I went viral.”

Ms. Kurdi later posted on Instagram, tagging several Black deaf creators, including Ms. Sutton. “Provide ASL interpreters whenever possible,” she wrote in the post. “Support Deaf creators. And if you’re still wondering why deaf and hard of hearing people go to concerts, follow these pages and learn something new. Seeing an interpreter at a concert shouldn’t be shocking.”

Ms. Kurdi, in an interview, also cited Ms. Sutton as an important source of inspiration for her work: “I’ve watched Raven’s interpretation like a million times. I watch her work all the time.”

Guilherme Senise, a 20-year-old student in Campbellsville, Ky., who posted the video, said the main reason he did so was because there was so much happening in it, aside from just Ms. Kurdi’s signing. Megan Fox and Machine Gun Kelly made an appearance in the clip as they walked by. “I was like, ‘Whoa, what is going on?’” Ms. Senise said.

He wasn’t immediately expecting it to go viral either because “A.S.L. interpreters are not as seen as they should be on social media,” he said. But he was happy to see the video gain so much traction as “an opportunity for interpreters to show their job and an opportunity for the deaf and hard-of-hearing community to be more visible.”

This isn’t the first time a white hearing person has gone viral for a sign-language interpretation of “WAP,” either. In 2020, Libbey Ketterer posted an interpretation of the song on YouTube, in a video that has more than 2.7 million views.

“This happens with enough regularity that it’s been observed,” said Anabel Maler, an assistant professor of music theory at the University of Iowa. “It’s typically a hearing interpreter, particularly a white woman, often interpreting hip-hop.”

These interpretations are also often also sexualized, Dr. Maler added. “It takes away from the real purpose of them, which is to provide access to the deaf community,” she said. “And it also adds to this kind of fetishization of A.S.L., the idea that A.S.L. is so beautiful and amazing, without talking about how it’s a rich and complex natural language like all other natural languages.”

For the original Black deaf creators, this pattern can be especially disheartening. “They are signing songs that are not of their culture,” Ms. Sutton said. “This is a hip-hop song talking about a Black experience of a Black thing, but we got a white face who’s gone viral, so white people are getting the glow up off these types of things.”

Matt Maxey, a deaf creator in Atlanta who runs the Instagram page @deafinitelydope, said that it’s “more inspiring to see a Black man up here signing if you’re a Black person.”

Mr. Maxey, 33, started posting online because, at the time, he didn’t see any Black people on the internet signing, especially doing interpretations of songs he liked by artists such as J. Cole, Mac Miller and Big Sean. “I was trying to expose the deaf community to my culture as a Black man from the South,” he said.

Interpreters at highly visible events, like music festivals, get a disproportionate amount of the attention. Ms. Sutton wants people to know that her interpretations are more than just TikTok dances. “Some hearing people misunderstand, saying, ‘Oh, she’s a deaf dancer,’” she said. “No, I’m interpreting. I’m providing full access, which, if I’m just standing there, that’s not full access.”

At the same time, social media has been helpful in amplifying the perspectives of deaf people. “One of the amazing things with TikTok and Instagram is that deaf content creators do have a place where they can create their own space and put out their content,” Ms. Kurdi said. “Years ago, there wasn’t as much of a platform or place where they could put up their content, and now there is.”

And to provide even fuller access, concert and event organizers can hire hearing interpreters who can hear what is being said and pass it along to deaf interpreters to allow for “something that’s more culturally and linguistically accurate for the audience at large,” Ms. Burton said.

After this viral moment, Black and deaf content creators hope to see the spotlight on themselves next time, and at least have this be an opportunity for people to learn more about accessibility. “I want people to think of what the deaf community goes through every day,” Ms. Sutton said. “Learn A.S.L. to provide access, not so you can do a song that goes viral.”