There she is! Taylor Swift made an appearance at the 2021 iHeartRadio Music Awards, and of course, she was a total standout in her gorgeous ‘Folklore’ inspired look.

Taylor Swift, 31, looked gorgeous during her virtual appearance at the iHeartRadio Music Awards on May 27. The singer, who’s nominated for four awards at the show, once again wowed in a Folklore inspired look. She opted for am metallic floral dress channeling the vintage vibes of the album, which won Pop Album of the Year! 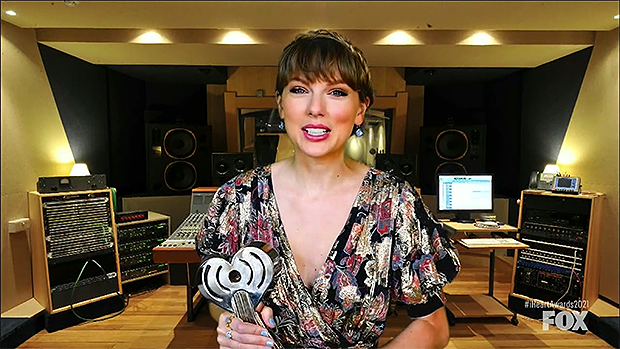 “Thank you to the fans for making this album what it was, because we all needed to escape into stories — whether it was movies or TV or film or music — and the fact you chose this album, I am so honored by that,” she said in her virtual acceptance speech. “You really wrapped your arms around it — the way that someday, we’ll be able to wrap our arms around each other when we see each other again. Sending the biggest hug…for you. I love you,” she added, moving her arms into a hug position.

To complete her look, Taylor had her hair up in a braided updo, allowing her bangs to fall in front of her face. Her glam was on-point, as she rocked a neutral makeup look, including a nude lip and very light gold eyeshadow. She added a bold black eyeliner to her look that made her eyes totally pop as she gave her sweet “embrace” to fans!

Of course, Taylor is no stranger to the iHeartRadio Awards. She’s attended the event three times in the past — in 2015, 2016 and 2019 — and has won 11 awards at the show over the years! This time around, she’s nominated for Pop Album of the Year (for Folklore), Female Artist of the Year, Best Fan Army and Best Lyrics (for “Cardigan”).

Taylor is currently in the process of re-recording her first six albums so that she can own the rights to her masters for them (she already owns the rights to her three most recent new records: Lover, Folklore and Evermore). In April, Taylor released the first re-record, Fearless (Taylor’s Version). The album, which was originally released in 2008, featured new versions of all of the album’s original tracks and bonus songs, as well as six brand new songs that didn’t make the cut the first time around.

Since the release of Fearless (Taylor’s Version), Taylor has been quite quiet on social media, which has fans certain that the next re-recorded album is coming sooner than later. Based on clues that Taylor gave in a recent interview with Stephen Colbert, Swifties have guessed that 2014’s album, 1989, is the next one that Taylor will drop a re-recorded version of. She has not confirmed this news yet herself, though.