To true sneakerheads, March 26th marks the return of a global holiday they’ve been saving up for all 2021: Nike Air Max Day. The big event brings on a special edit of new sneaker releases that’ll make you feel like a little kid in a candy store. And this year the celebration is longer than ever, continuing all weekend long.

In addition to releasing a few new Nike Air Max styles you can get hyped about, the iconic sneaker brand is hosting a day-long virtual event that includes creative workshops, inspirational panels, special guest appearances, and musical performances.

New drops will be happening all weekend long and we expect them to fly off the shelves. If you’re too late to cop your favorite pair, check out competing retailers and marketplaces like GOAT, Extra Butter and StockX.

In the late 1960s, an aerospace engineer named Marion Franklin Rudy left his career to purse something more creative. He started placing tiny air bags in shoes, testing prototypes, and pitching this innovation to a variety of shoe companies that all rejected him. Nearly a decade later, Rudy presented his invention to Phil Knight, the co-founder of Nike, and the rest is history. The first shock-absorbing sole system in athletic footwear was born.

As streetwear culture was on the rise through the ‘80s, the stars aligned with Nike’s timing, echoing the tenor of decade. The first of its kind, the Air Max One was created in 1987, the first time Nike visually put Nike Air technology on display. Since then, the line has grown with new releases and reworked classics featuring smart tweaks and innovative new materials.

In one giant leap to 2021, Nike started the celebration a week early, setting the stage of this anniversary with the release of the Air Max Pre-Day. The retro aesthetic in this sneaker celebrates its history, while nodding to the future with a sleek silhouette to show off the Air technology.

The new Air window allows for compression that creates a softer bounce in the heel. It highlights the sneaker’s most vital components, opting for a less-is-more approach. It’s made with at least 20% recycled material and serves as a symbol of what the company is doing on a much broader scale. Over the past two years, 99.9% of Nike’s footwear manufacturing has been diverted from the landfill to be recycled into something new.

Originally released in 2006, the Air Max 1 x CLOT collab combines Eastern and Western influences. It features functional reflexology and pressure point technology within the shoe, nodding to traditional Chinese medicine. Today, Nike brings back this historical shoe with an updated construction and perforated toe cap. This is available on 3/27.

The Evolution of Icons celebrates the very first Air Max through a mix of eclectic color combinations. It pays homage to the ‘80s (when this baby was born) and celebrates the OG creators on the insole. The back is embossed with this year’s Air Max Day date (3/26) to build the hype.

The Air VaporMax Evo combines seven Nike iconic innovations of the Air Max throughout history, including the Air Max 90, Air Max 93, and Air Max Plus. If you can’t decide on a new pair this Air Max Day, choosing one that celebrates several styles might be the way to go.

Bring home the bacon! With colors inspired by the stages of cooking everyone’s favorite greasy breakfast staple, this comeback design is a mouthwatering new release worth the hype. This might be Air Max Day’s most coveted release. 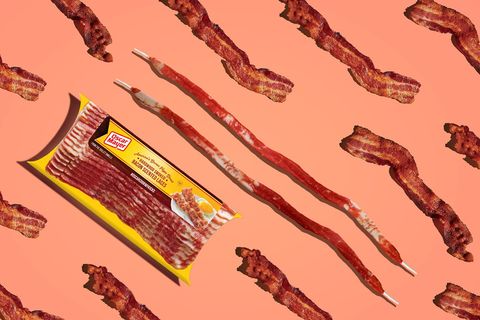 To get even greasier, you can enter to win a pair of bacon-scented shoelaces from Oscar Mayer to complete your breakfast meat footwear look. The wiener company is celebrating the re-release of the Air Max Bacons with laces “that will make your kicks sizzle.” All you have to do is tweet #OscarCookMyKicks and #Sweepstakes for a chance to win.

Foot Locker and Nike teamed up to present a collection of Air Max styles that celebrate the diverse cultures across the U.S. The new “City to the World” collection captures the vibe of Chicago, New York, Atlanta, and Los Angeles through bold intentional color choices that illustrate what each city is known for.

The new Air Max 97 is sleeker and lighter than ever. With a new mesh addition and a full air sole, you can’t help but fly in these, especially running at night with a glowing stripe.

It wouldn’t be Air Max Day without multiple nods to the iconic original waffle sole. A monochromatic, all-red moment will be the statement of the season. These are available 3/27 and are a part of the Foot Locker “City to the World” collection, channeling Chicago.

If you’re on a budget and still want to celebrate Air Max day, you’re in luck! We rounded up some of the best deals with the iconic Air Max technology below, so you can walk on air, without blowing your (entire) paycheck. Be sure to check out other retailers like DSW, END, and Nordstrom for more great deals on this Nike icon.