LOVE Island’s Lucie Donlan, Jess Lever and Samira Mighty have the most perfect breasts  – according to the ‘Golden Ratio’.

Laura Anderson, Megan Barton-Hanson and Olivia Attwood also scored highly  – based on the theory – a system developed by the ancient Greeks to measure physical perfection. 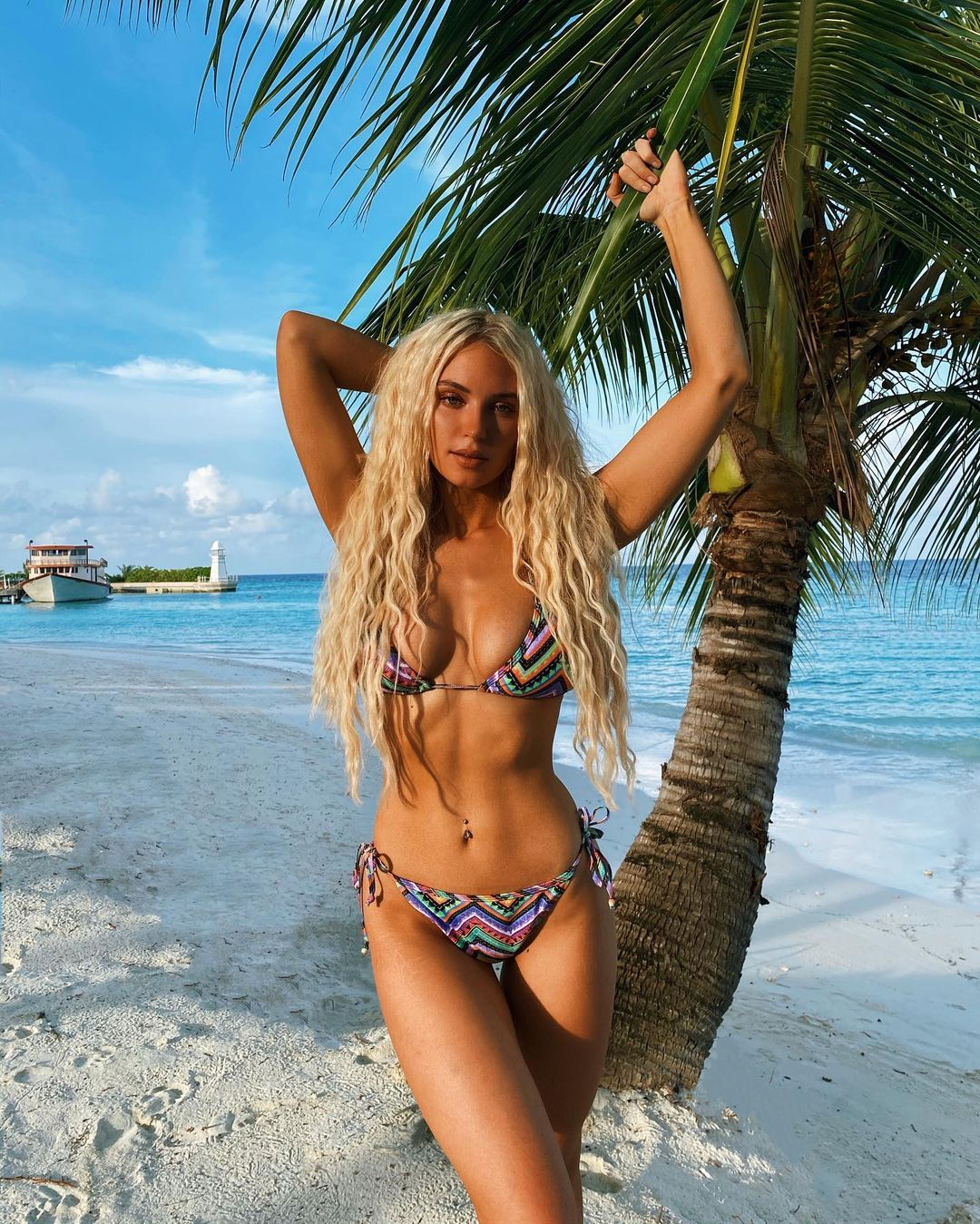 While Love Island beauties Ellie Brown and Jess Gale’s breasts are also blessed with near ‘perfect’ proportions, according to the formula.

The mathematical equation – known as Phi – was devised by the ancient Greeks and it sees the ideal breast ratio as 45:55.

Dr Veerle Rotsaert (must include link), whose practise is based in Belgravia, compiled a list to see how other Love Island stars’ breasts matched up, according to the formula.

The plastic surgeon, who performs her surgeries at the Welbeck hospital in Marleybone, said she admired the Love Island ladies for their beauty as they are all gorgeous in their own way. 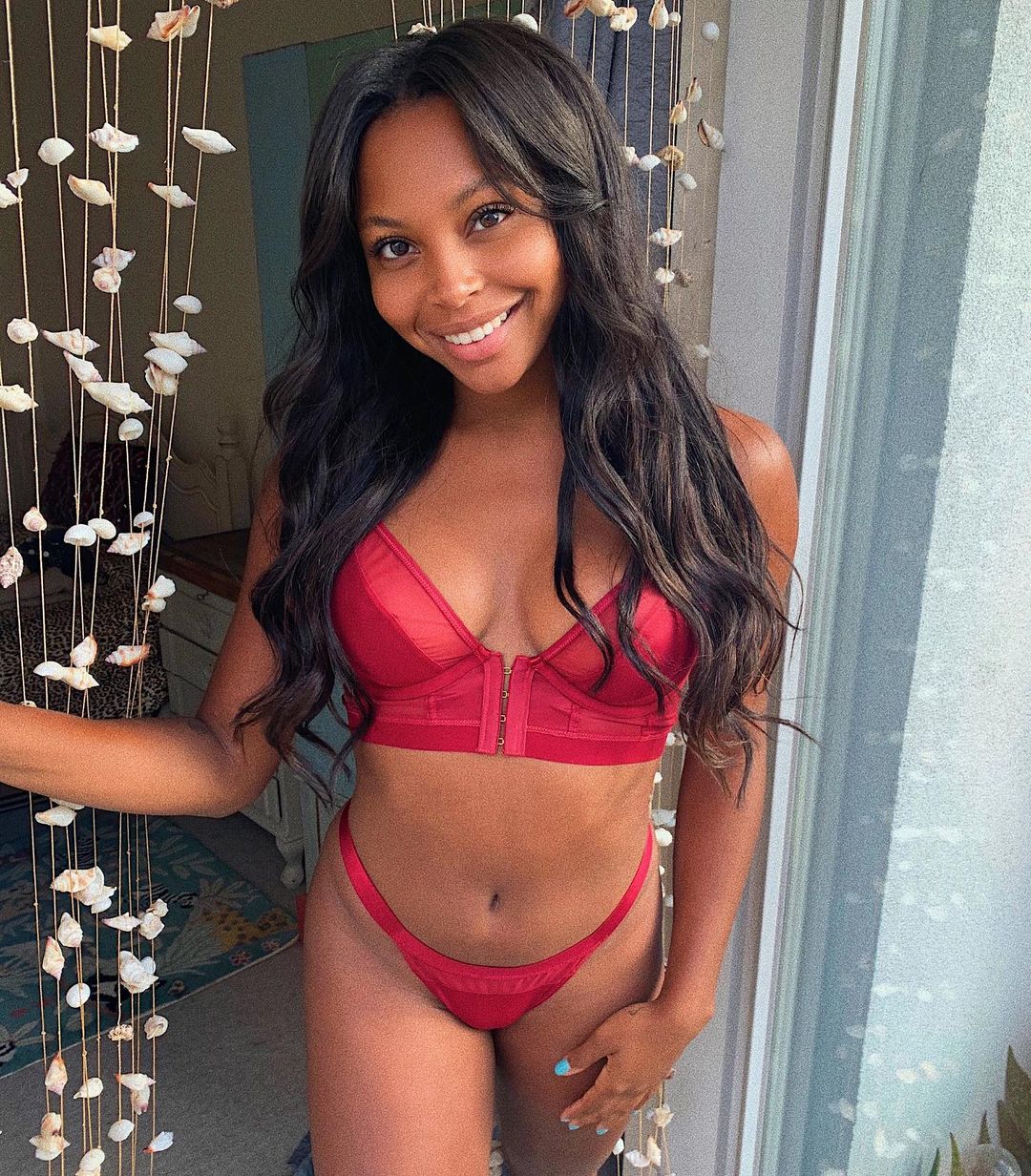 She said: “The golden breast ratio is a mathematical equation which calculates the ideal breast size from the Phi ratio as 45:55.

“This means 45 percent part of the breast should be above the nipples and 55 percent below them.

“In my practice, when it comes to deciding on the perfect breast size, it’s important to understand what compliments someone’s frame as well as their unique anatomy, skin quality and desired outcome.

“This is a very personal journey and I always take the time to choose the perfect implant size because it is a life changing decision for many women who have often spent years saving and contemplating having this done.” 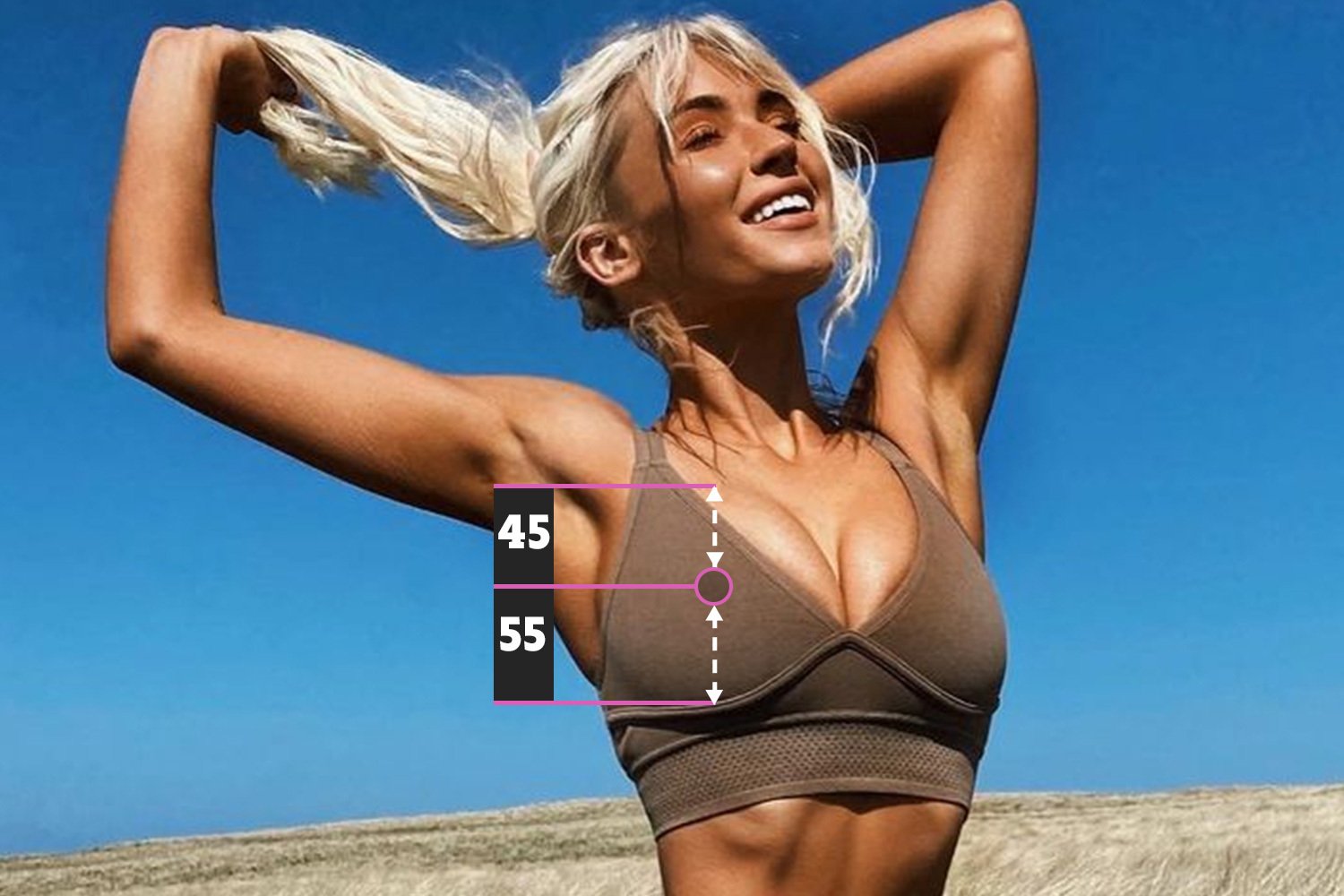 Love Island star Lucie Donlan, from series 5 of the hit ITV2 dating show, has scientifically ‘perfect’ breasts, according to the ratio.

Dr Veerle Rotsaert said: "Lucie seems to have quite a perfect ratio, although it’s very difficult to say when analysing different pictures.

“She’s very beautiful and in proportion to her body.” 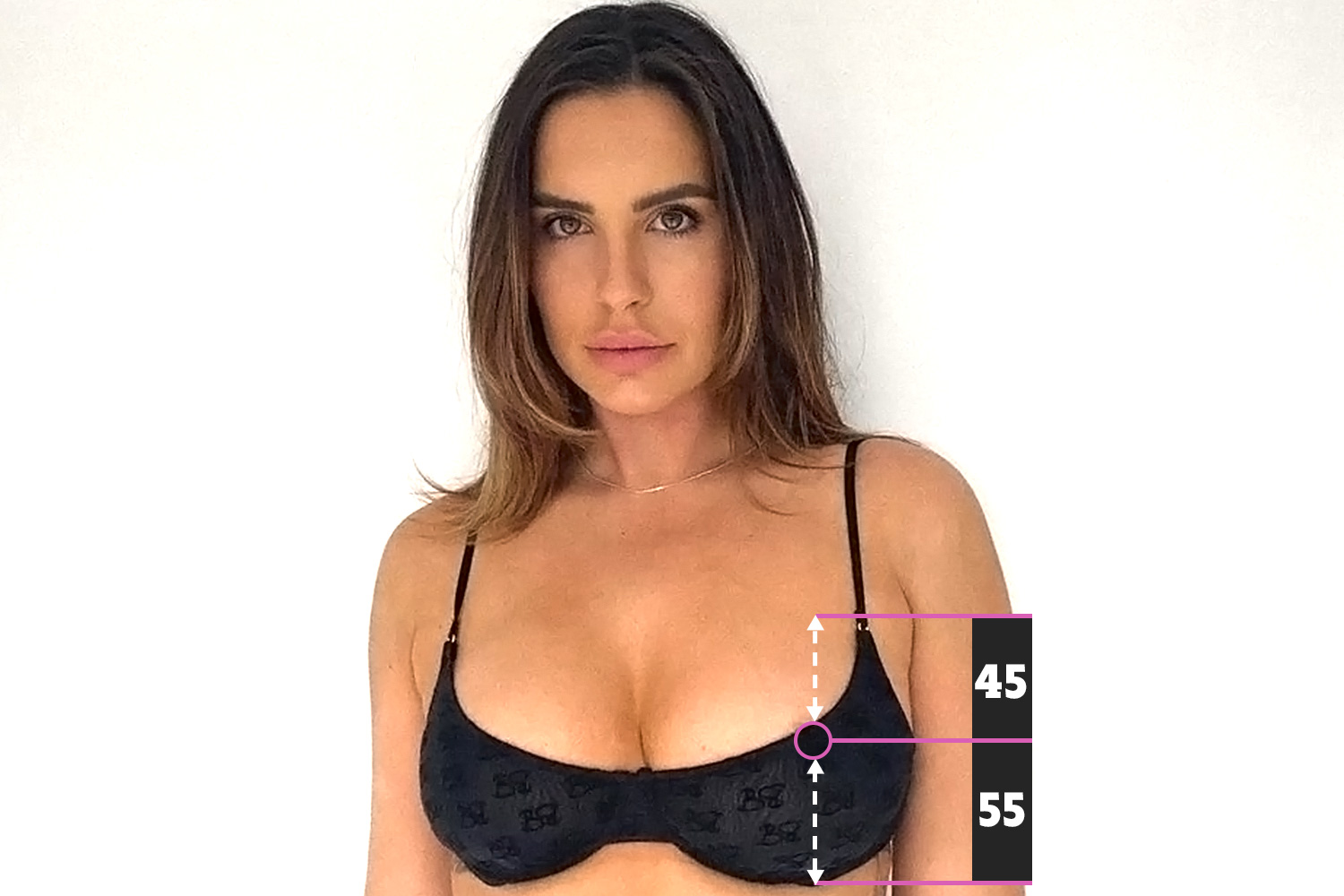 Dr Veerle said Jess Lever, who married her Love Island soul mate Dom after meeting on the show in 2017, has the perfect Golden Ratio.

“Jess is curvaceous and her breasts have the perfect slope and upper pole which really suits her frame.” 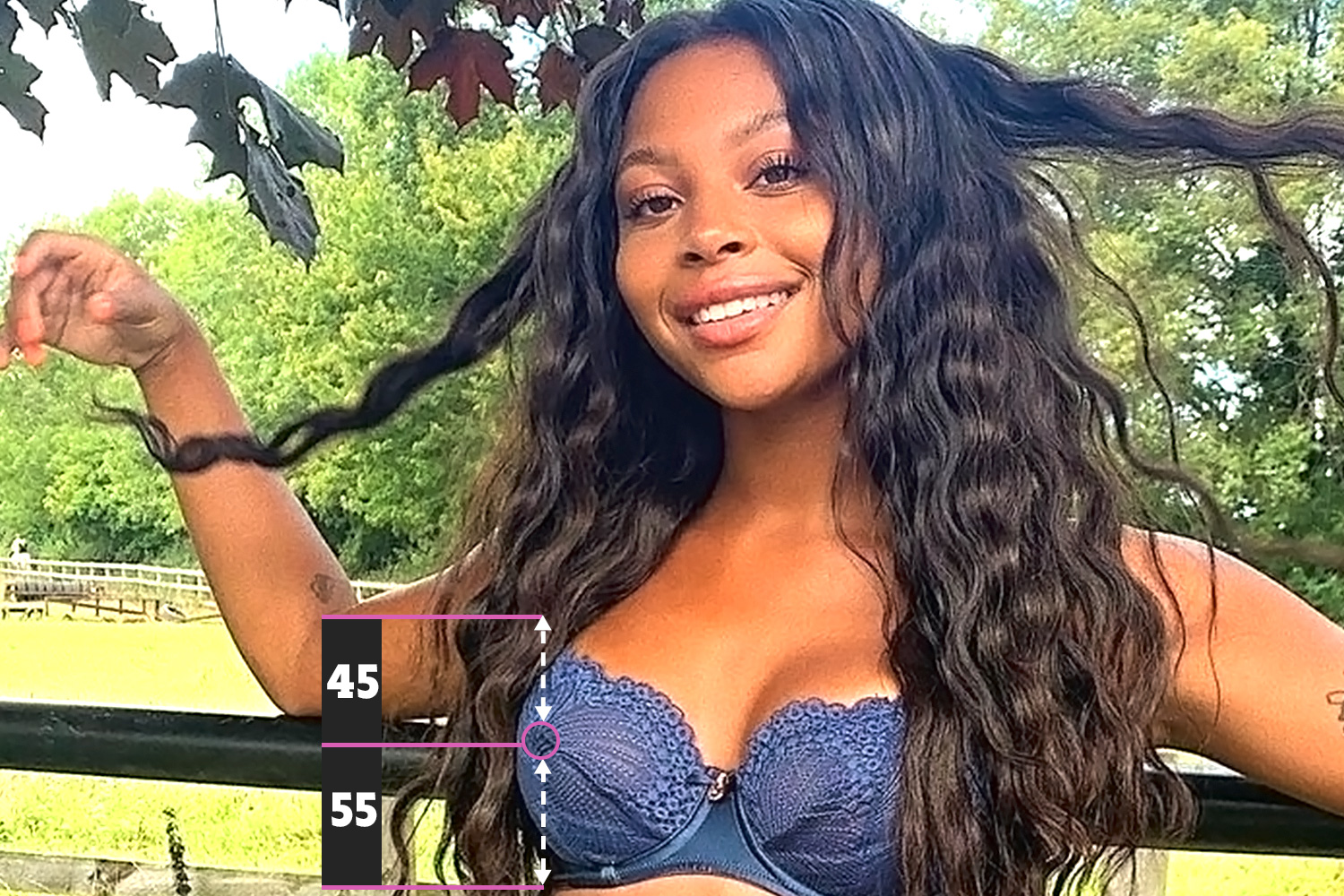 The surgeon also analysed Samira Mighty’s breasts using the Golden Ratio equation; The Love Island contestant starred on the show in series 4 back in 2015.

“She has a stunningly beautiful natural perfect slope and her breasts fit her frame perfectly.” 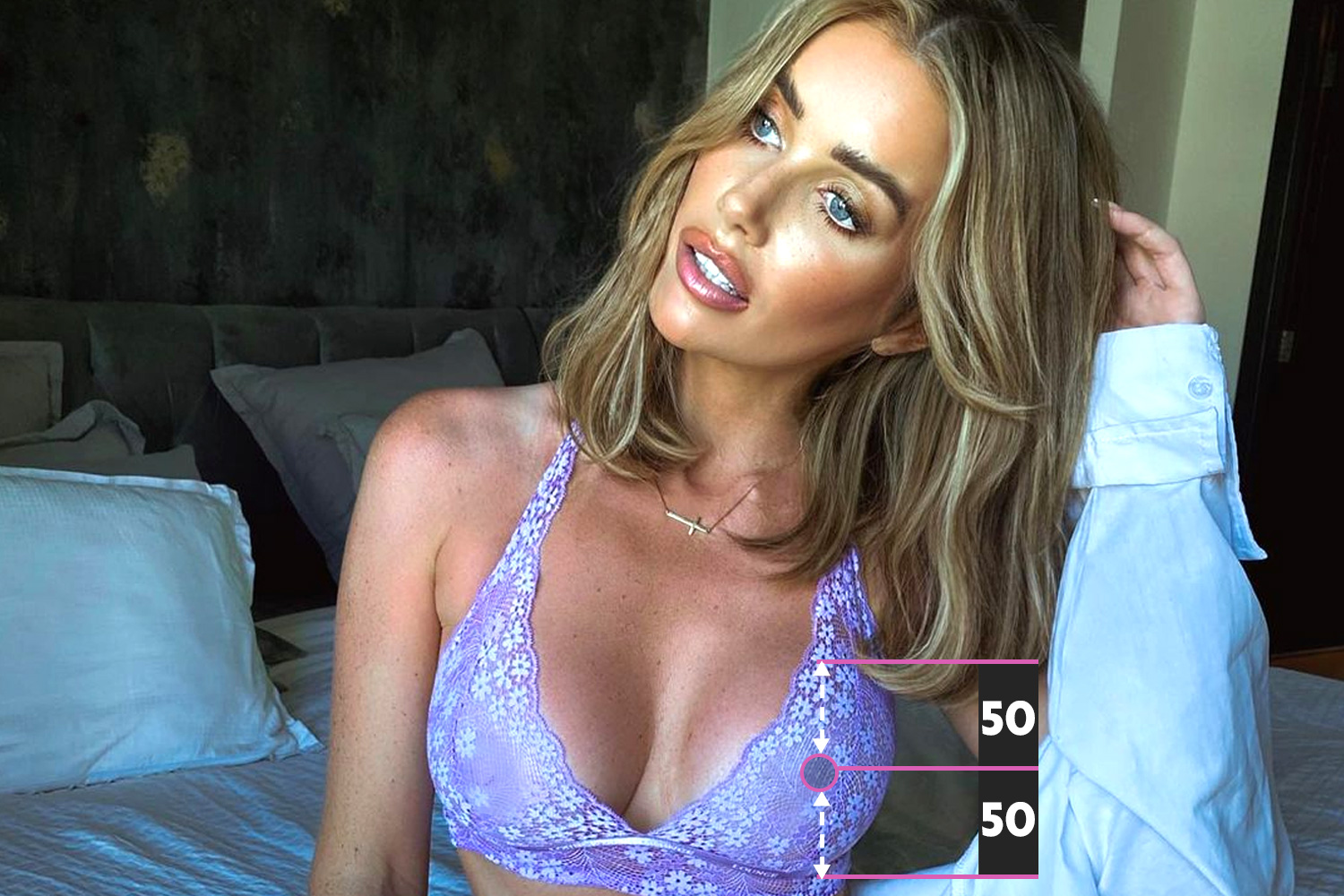 Love Island’s Laura Anderson, from series 4, has been very open about her journey with breast augmentations.

Last year, the Islander opened up about her second boob job, which left her with huge red scars under her bust, numbness and pain.

Veerle analysed some pictures of Laura and using the Golden Ratio, gave her a 50:50 equation.

She said: “Laura has been very open about her original ‘botched’ breast augmentation and had a breast implant replacement in 2019.

“I think her surgeon has done a fantastic job! Her breasts have a near perfect ratio but with slightly more volume in the upper pole. She looks amazing.” 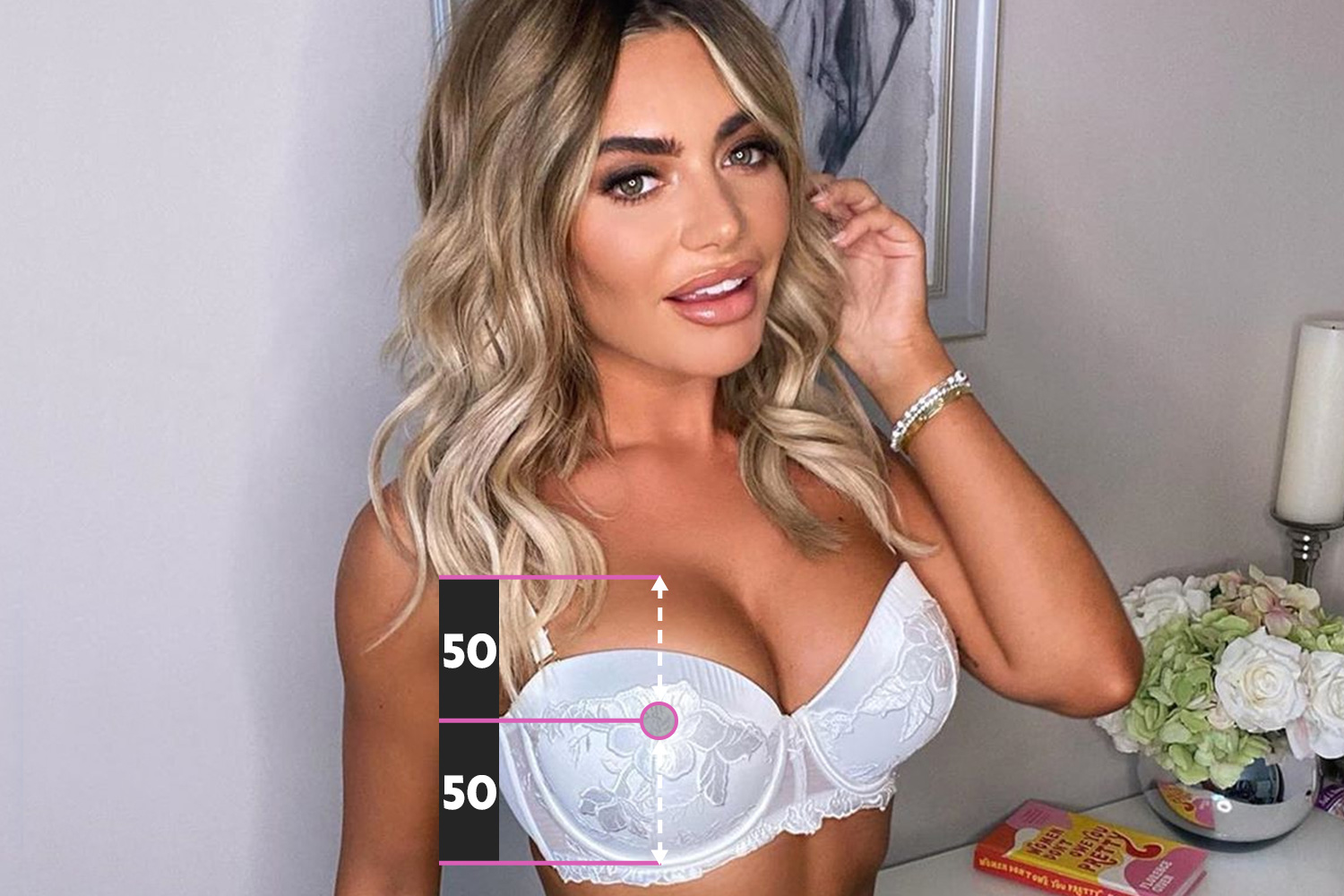 Megan Barton Hanson, who made her appearance on Love Island in series 4, has a 50:50 Golden Ratio. 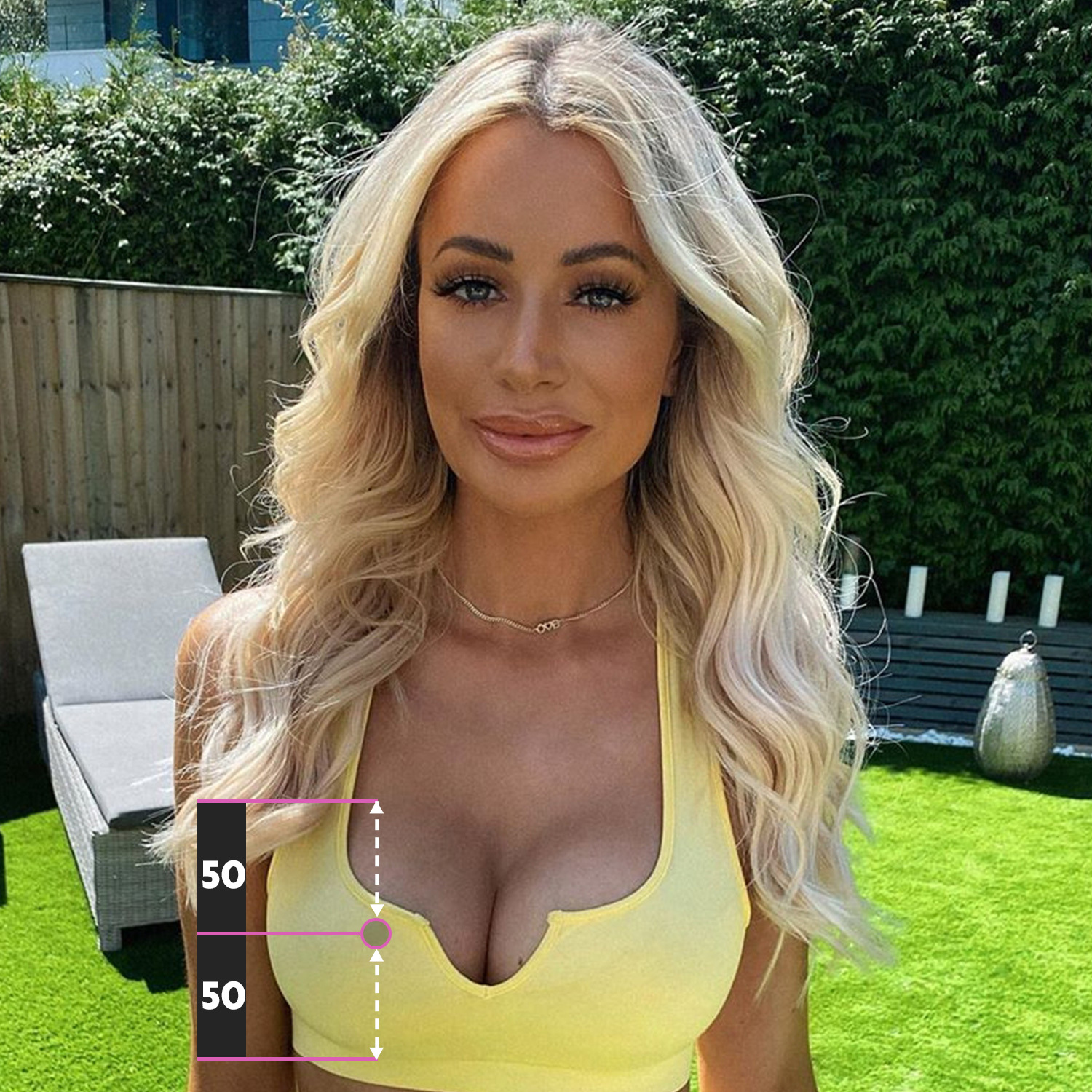 Love Island favourite Olivia Attwood also has a 50:50 Golden Ratio in her breasts.

Veerle said: “I believe the beautiful Olivia has breast implants and she looks incredible with a near perfect ratio.

“They look really natural and fit her frame.

“Often when ladies have an implant their Golden Ratio changes to 50:50.” 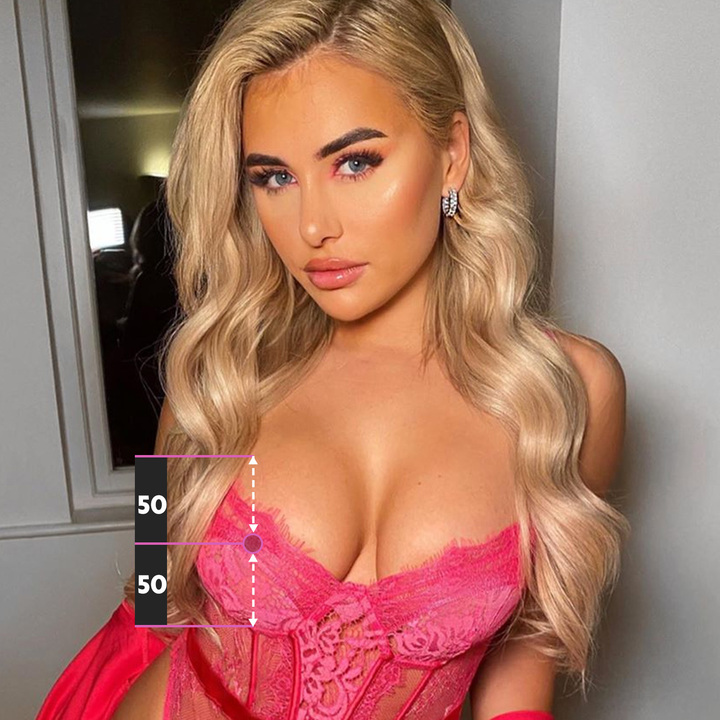 Meanwhile Love Island beauty Ellie Brown, who strutted into the villa in 2018, has a “near perfect” Golden Ratio.

Her breasts were given a 50:50 ratio, using the ancient formula.

Dr Veerle Rotsaert commented: “The beautiful Ellie Brown has a near perfect ratio, I would say she is 50:50.

“There’s an obvious fullness in the upper pole, therefore the ratio is maybe nearing more somewhere in between 50:50 and 55:45.” 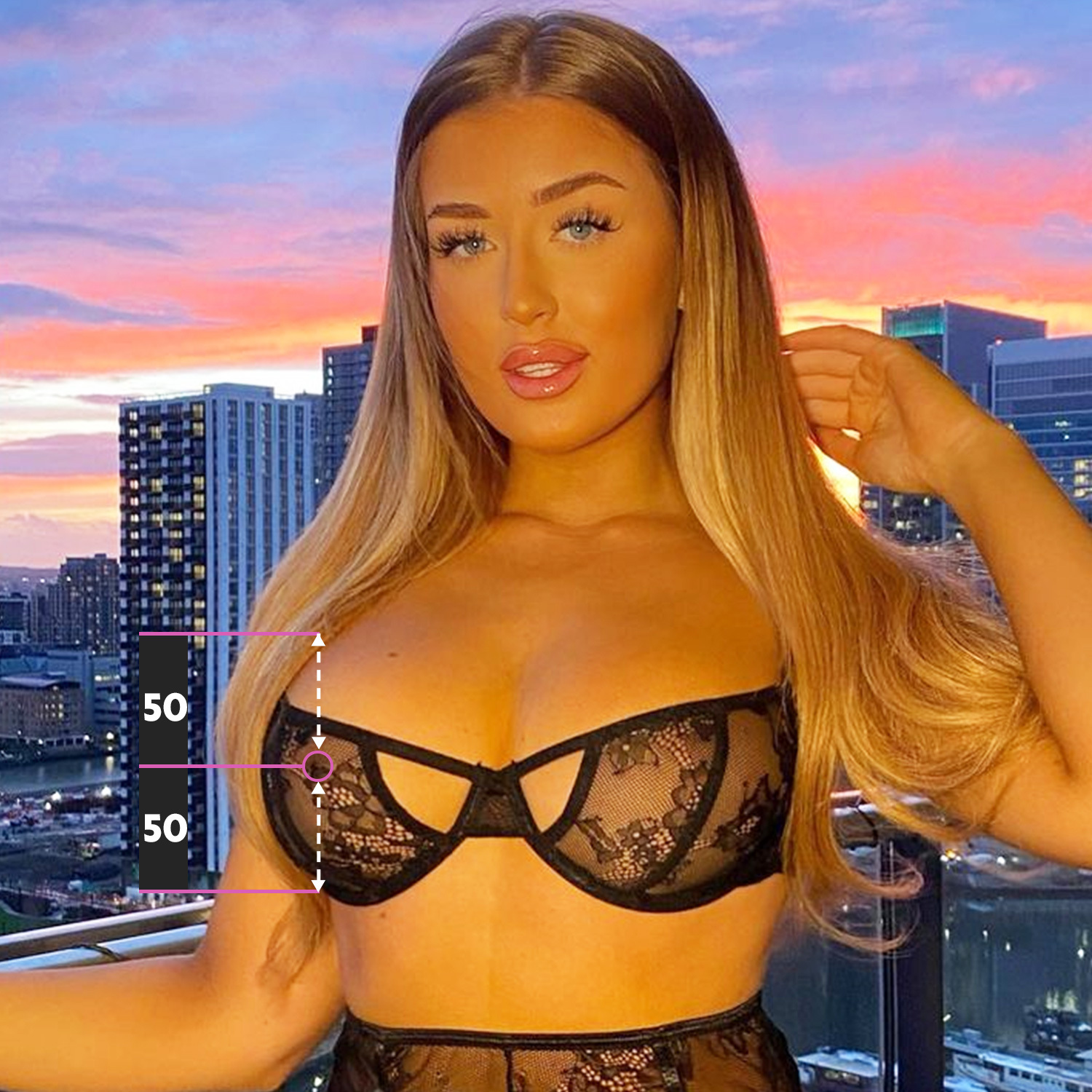 One half of the first ever set of twins to appear on Love Island in series 6, Jess Gale also has a 50:50 Golden Ratio.

She said: “Obviously very similar to her twin sister Eve, Jess might have a slightly less, obviously full upper pole so a ratio of 50:50.” 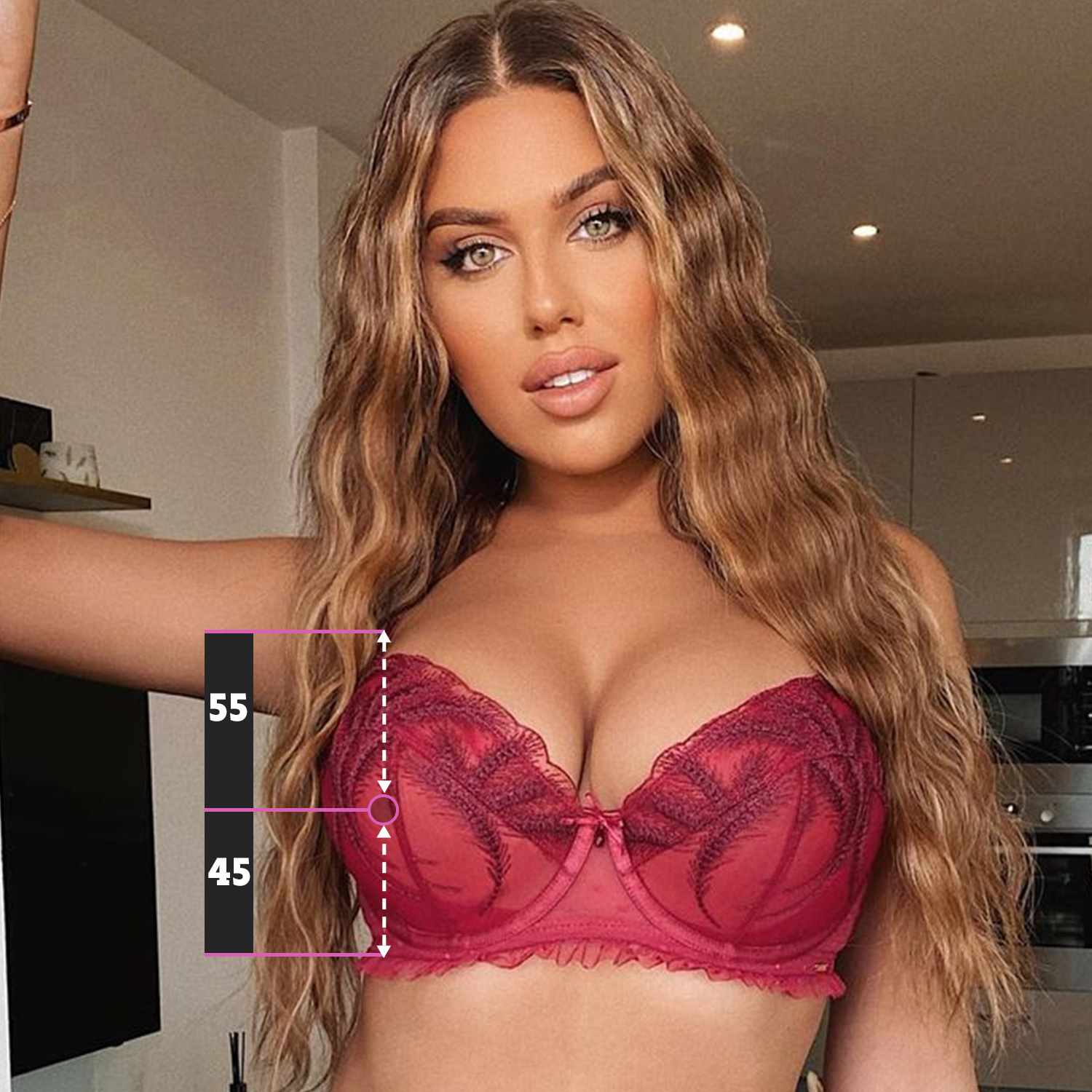 The expert also analysed Anna Valiki’s breast, which she said would have a 55:45 ratio, using the Golden Ratio formula.

Anna has since said that after looking back at herself in Love Island she noticed that her boobs looked "too big" and she's attempting to reverse the procedure by having smaller implants.

Dr Veerle said: “The beautiful Anna Vakili would be a 55:45 ratio. This lady has been very open about her breast augmentation in the past where she regretted having gone too big.

“I believe she is having or has had her breast implants removed recently, which in my opinion would give her the perfect 45:55 ratio back.

“Girls who replace big implants for smaller ones or who have their implants removed completely are some of my most grateful and happy patients afterwards because it quite literally takes a weight off their chest and shoulders.” 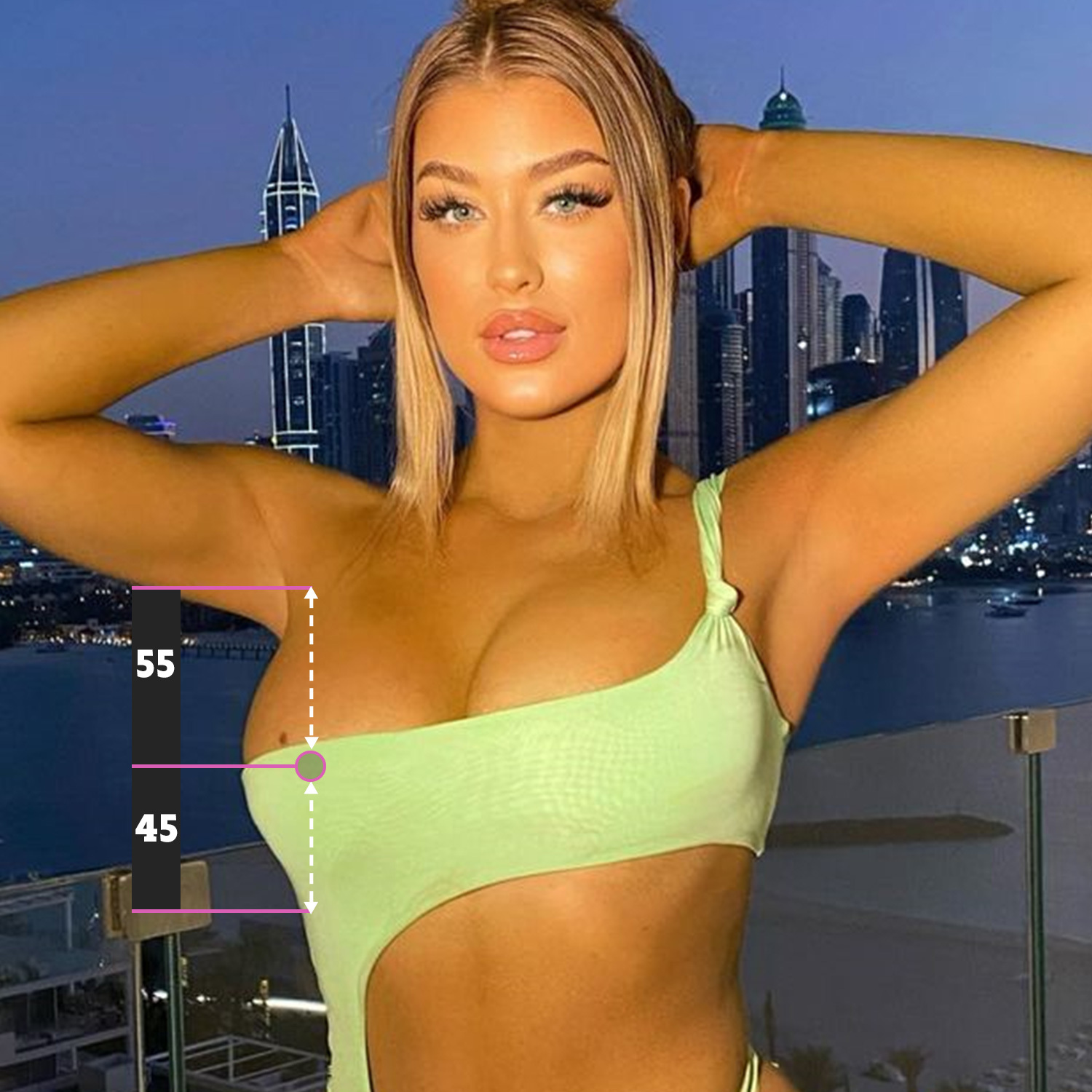 The Love Island sisters appeared on the first ever winter series of the show in South Africa in 2020.

The surgeon added: “I believe Eve is a 55:45 ratio. She pulls it off and looks fabulous!” 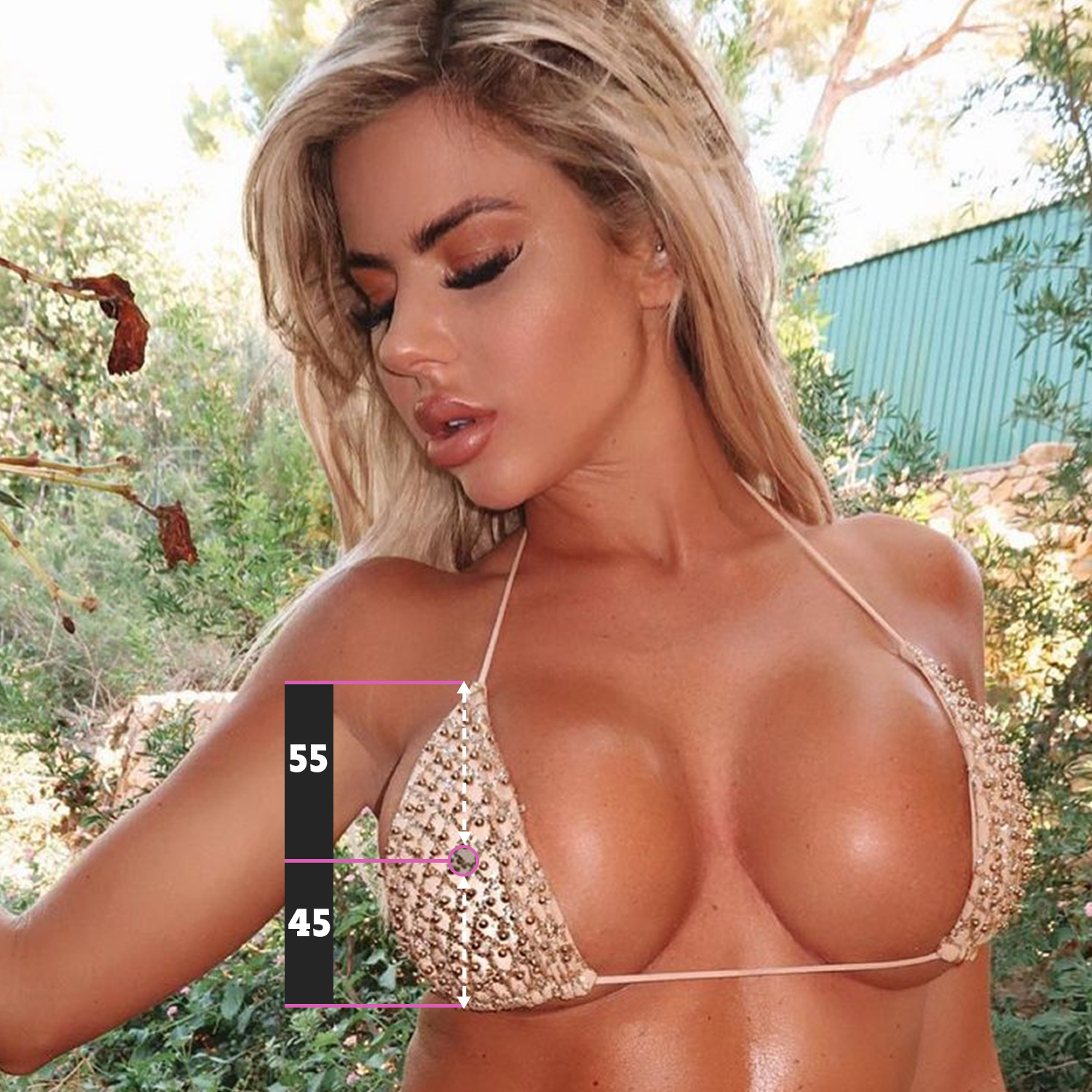 Dr Veerle said original Love Island star and Playboy model Hannah Elizabeth, from the first ever series of the show, has a 55:45 breast ratio.

The blonde bombshell previously revealed she got her first breast augmentation at 20-years-old and then again at 23.

Expert Veerle commented: “Hannah’s breasts have a 55:45 ratio, using the Golden Ratio formula. She’s another lady who has been open about her surgery.

“Because of her implants, she has a 55:45 ratio with a fuller upper pole.”

Dr Veerle Rotsaert said it was important to add: “These Love Island women are all gorgeous in their own way.

“If they feel good with their breast size and shape, then who are we to say whether they have perfect breasts or not!”

Anna Vakili is the Love Island girl with the most perfect bum, according to golden ratio.

Love Island star unrecognisable in childhood throwback pic before fillers and extensions – but can you guess who it is?

Can you match the beach bum to the famous face? From Chloe Ferry to Georgia Steel – take our quiz to find out.