On sunny weekend afternoons, a socially distanced line snakes around the Puck Building in New York City’s SoHo shopping district — a visual reminder of parties and shows from the past. Is it the site of a new viral food? Try again. The queue for a streetwear drop? Nope. It’s the line to get into REI Co-op.

The fervor that the REI has attracted in New York and other urban hubs around the country has come as a surprise, even to the company itself. With few places to wear status symbols, and a daunting number of hours spent idling indoors, urban dwellers have come around to the great outdoors and the aesthetic associated with outdoor life. They may have moved to big cities with concrete ambitions, but the lifestyle to which they were once steadfast — trading fresh air and trees for around-the-clock convenience — is suddenly unappealing for the many who have been holed up in small living quarters. And the trend, according to experts, is expected to outlast pandemic times.

REI’s rising popularity is a telltale sign of wider cultural shifts around priorities and shopping that have been ushered in by the pandemic.

And lucky for REI, this appreciation for nature comes with the need for a new wardrobe of performance gear and apparel — sending onetime sworn-urbanites diving into an uncharted category of spending.

Instead of designer heels, they have been springing for hiking boots and, this past winter, snow shoes — which at their peak have seen a 1.2 times and four times increase in sales at REI, respectfully. Trading boutique hotel stays for tents (no ventilation concerns there) — with sales up two times. And trendy handbags for Osprey hiking backpacks and Yeti coolers, which both saw increases exceeding 1.2 percent in the last year. That’s not to mention spending sprees on bikes (up five times), fire pits (up six times) and cross country skis (up three times) — which were so popular that they became impossible to even buy at various times throughout the pandemic.

“People are putting an emphasis on getting [outdoors] and are saying, ‘Wow I didn’t know what I was missing,’” said Evelynn Escobar, a digital strategist and founder of Hike Clerb, a hiking club that encourages women of color to get outdoors. “It’s just blown up. I see people wearing hiking clothes on road trips, I think, generally, it’s just become more mainstream. I’m based in L.A., which is generally outdoorsy but now even my friends in New York are, like, ‘Oh man, maybe I should move to L.A. so I can go do more nature things.’ People are beginning to question their environment now that they’ve been stuck in one place for a year. They want places to go reset and that’s not easy to do in a major city.” 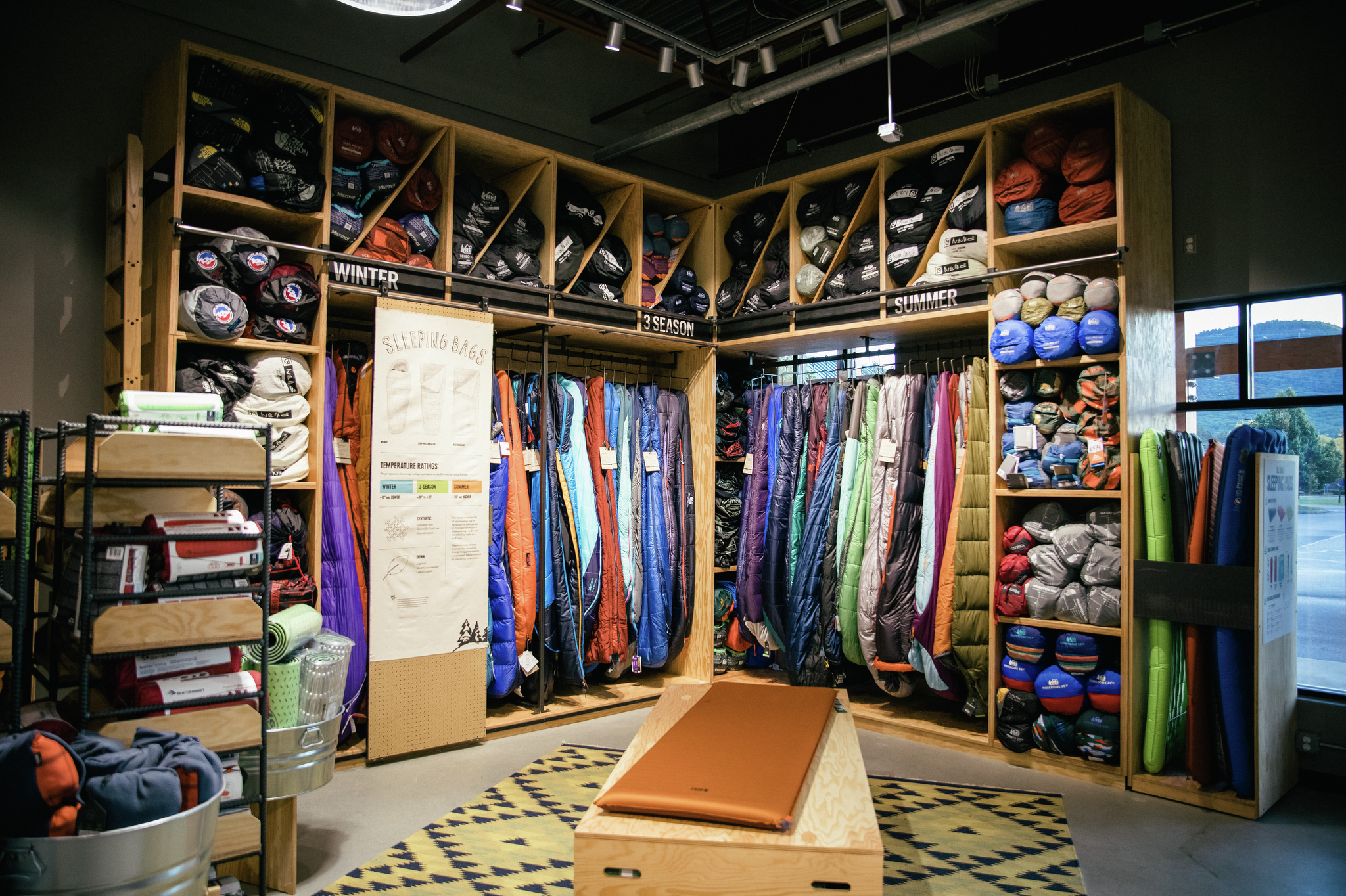 Inside the REI store in North Conway, NH Courtesy of REI

Check last month’s New York Times poll as proof. The two cities in the U.S. with a population greater than 50,000 to see the biggest influx of residents during the pandemic are Hudson and Kingston — onetime sleepy upstate New York towns that in recent years were gentrified as Millennial Disney Worlds for weekend excursions.

Now those respites have been extended to full-time residencies, with the costs of homes there ballooning — seeing crazed bidding wars with cash offers, their residents quickly repainting them in serene colors and chalk loading them with midcentury revival furniture. And what do they offer? Greater proximity to nature.

New York State parks hit a record 78 million visitors in 2020 — adding about a million people from the year prior, despite limited capacities at most locations. Among them is New York’s favorite Millennial congresswoman, Rep. Alexandria Ocasio-Cortez, whose Instagram stories are a prime example of the new frenzy around nature. Fully outfitted with an Osprey hiking backpack and Patagonia fleece, the politician waxed poetic on her newfound love for the outdoors, which she developed after January’s insurrection, as she descended from a mountainside camping excursion in Harriman State Park.

For those not lucky enough to relocate full time, REI’s sole New York City store, located at the busy intersection of Houston and Lafayette Streets, has become something of an aspirational window into a world further up the Hudson.

The REI Co-op was founded in 1938 by a group of 23 climbing friends who decided to band together and source gear for their collective adventures. Originally for mountaineering, the store gradually expanded and by the 1980s had become a go-to retailer for recreational watersports, hiking, skiing and camping.

Now with 168 stores across the U.S., shoppers still purchase membership into the co-op. A $20 fee earns them lifetime enrollment into an organization that pays members back dividends on their purchases each year. In 2020, the co-op added about 1 million new members — on par with numbers the year prior when there was not an economic crisis.

But for members, entry into the co-op is not just a matter of shopping — it is admission into a loyal community of doers who engage in the company’s wider culture, which includes a network of online content, in-person classes and excursions. REI’s site is an outdoor information hub for nature-goers both new and experienced, offering advice on the best backpacking stoves, teaching new stand-up paddle boarders the correct way to hold an oar and reservations for in-store classes on how to repair a bike or use a compass.

While REI has not traditionally been a destination for anything remotely trendy, that all changed when lockdowns hit. One salesperson likened the scene of the SoHo store’s shoe department on a Saturday afternoon to “a zoo,” with New Yorkers clamoring to buy their first pairs of hiking boots. Others are buying used pairs on REI’s website — which saw a marked increase in category sales over the last year.

With weekend lines snaking blocks long, REI SoHo now attracts a kind of fandom reminiscent of the Supreme store that was once located across the street. And the brands it sells are seeing a runoff effect of the co-op’s popularity. This week, REI shoe staple Chaco — the brand of hiking sandals that, with its streamlined cording and orthopedic soles, can pass for styles from designer brands like Marni — revealed it was moving into a new production facility that could increase its output by 30 percent. 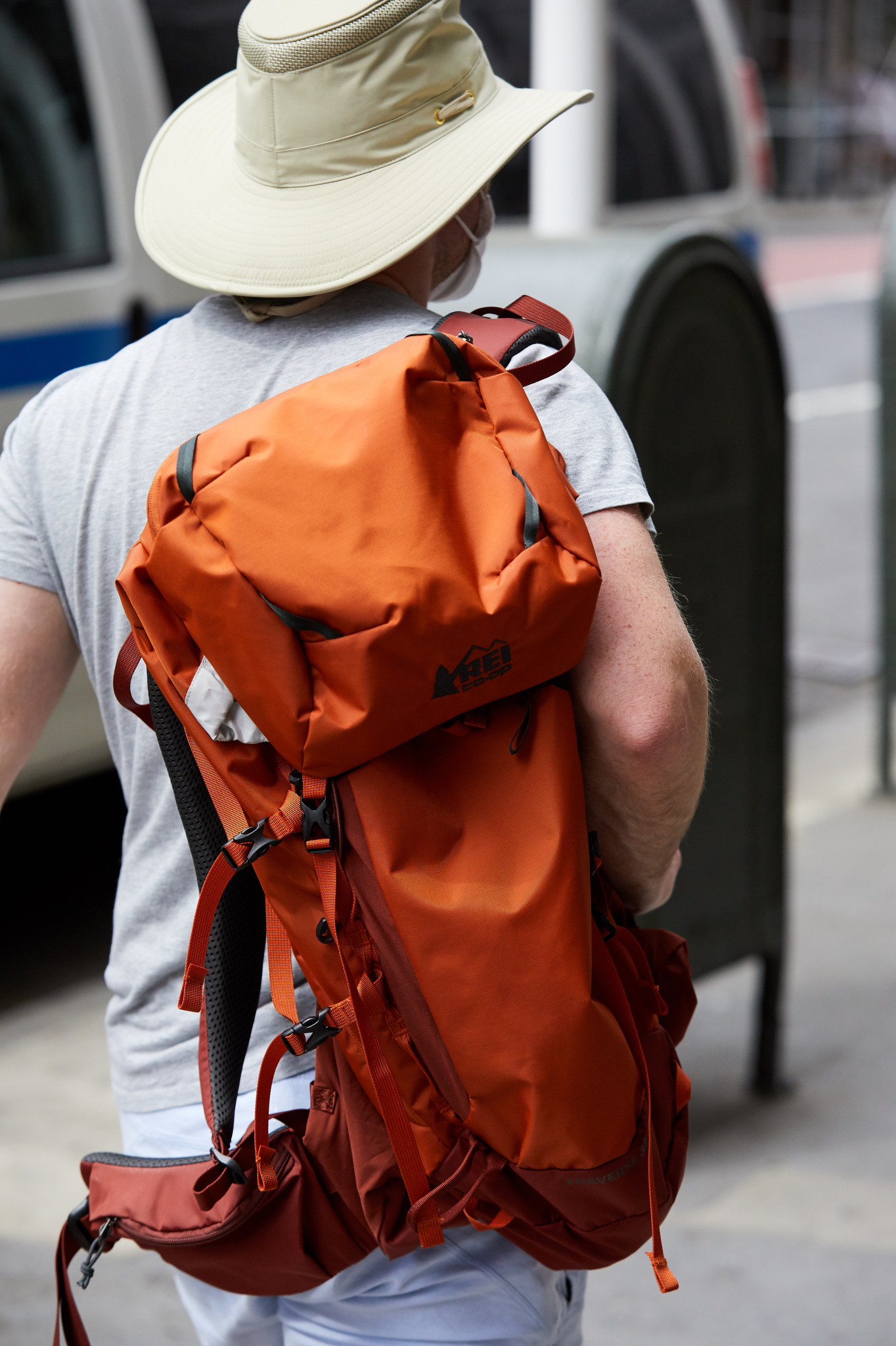 The pragmatic and industrial design of REI stores — the greige interiors, metal beam ceilings and walls of carabiners that had long upset those dragged into the store by significant others with mountaineering ambitions  — are no longer as irksome. Those off-putting piney cabin features suddenly feel like a nascent approach to retail, in a come-as-you-are, inclusive kind of way.

“It’s not what you would historically think of as a fashion. But, I think there is a convergence between materials and textiles in fashion. The outdoor aesthetic has been more popular on the street and some of the cooler lifestyle shops have been looking to carry more of an outdoor aesthetic. I think people go to wherever they can to find that product and REI happens to be one of those notorious outdoor retailers,” said Arc’teryx’s vice president of retail Megan Cheesbrough.

She pointed to Arc’teryx’s upcoming collaboration with Jil Sander and The North Face’s tie-up with Gucci — including a $3,500 tent — as a sign that the outdoors has been absorbed into the fashion mainstream.

Recently, Hermès has been circulating an ad on social media depicting a model scaling a rock climbing wall in a romper, with a Hermès cell phone bag slung across her body. That’s not to mention wider comebacks from the kinds of styles that have long been available for purchase at REI, like cargo pants (seen in collections from Saks Potts and Helmstedt), lap swim suits (like those sold by Denizeri and Nu Swim) as well as utility jackets. Conversely, fashion is beginning to rub off on the outdoors, with Patagonia recently introducing its own take on a summer romper.

“You see people wearing hiking shoes out now that may have never been on hike before. I think it’s more practical in this utilitarian sense,” Escobar said of the new openness to outdoorsy styles.

REI itself has partnered with West Elm on a line of rope chairs, shade shelters, outdoor dining tables and picnic blankets — items for a new generation of relaxed outdoor-goers. The company’s senior category merchandising strategy manager Gillian Stadelman said the collaboration is “a sign that speaks to casualness of day camping not staying out overnight. It’s for people who want to spend an extended period of time outside or in a park.”

The tie-up was so successful that a second collection will be released on June 6.

The newfound audience for these kinds of products are evident in the social media dispatches that now dot feeds each weekend — photos of morning glacial hikes, mushroom foraging excursions and respites to quiet fields in full bloom. 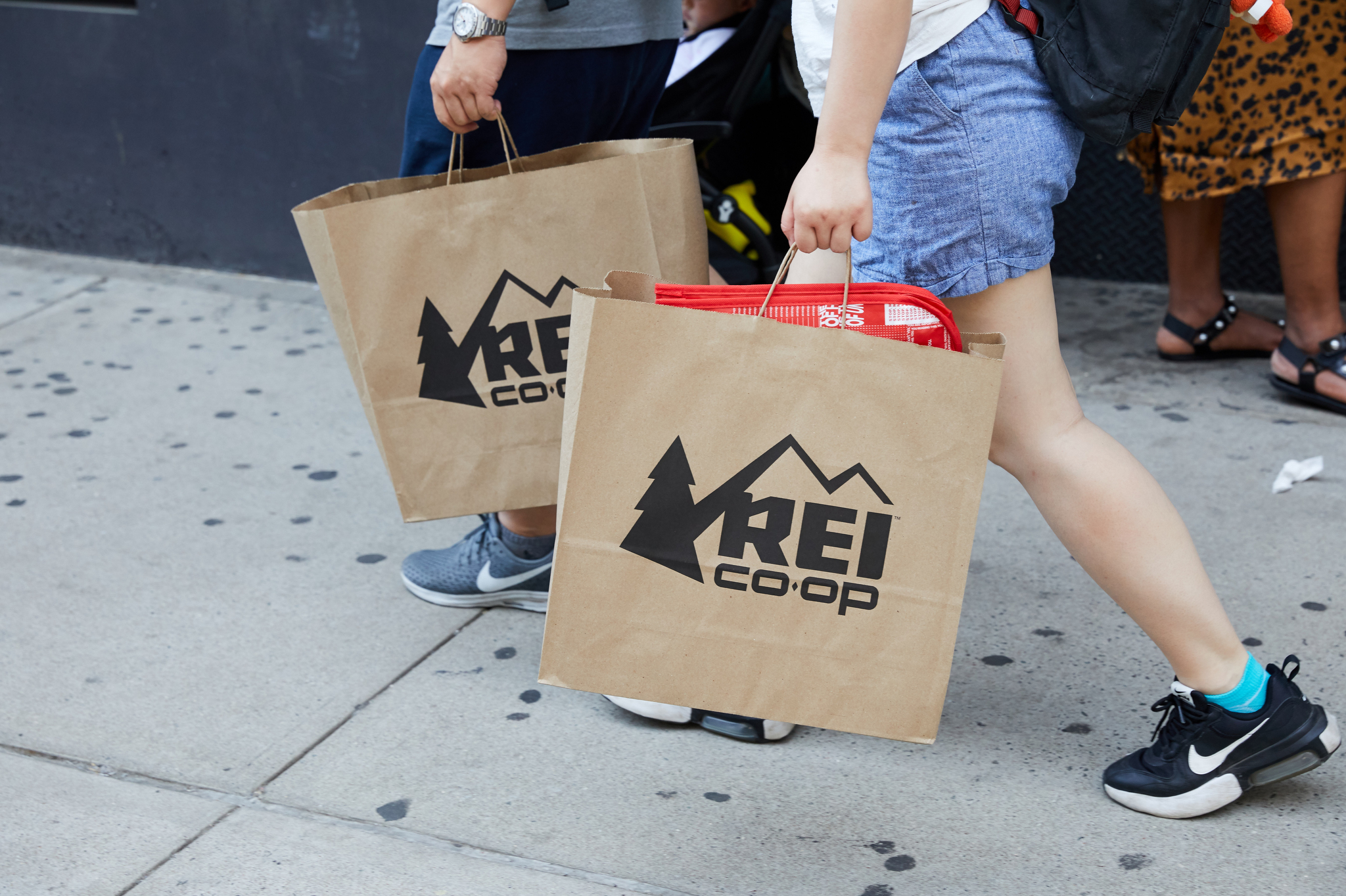 REI’s annual report issued this month said the company essentially broke even for the year, something of a landmark when one considers the plummeting numbers — if not bankruptcy — experienced by other U.S. retailers during the crisis.

It helps that outdoor gear requires performance — demanding that shoppers invest in a certain level of quality in order to stay warm, dry or even safe when engaging in their newfound hobbies. It’s also notable that outdoor stores, like REI, have pioneered retail concepts that shoppers seem to want but fashion has been sluggish to adapt — like size inclusivity, expert and engaged salespeople who have a stake in the company’s wider success, and the idea that walking into a store is about more than just spending money, but can also be an educational or rewarding experience.

“You don’t think about that when you just go shop for clothes,” said Lise Aangeenbrug, executive director for the Outdoor Industry Association. “You have to consider, ‘Is it rainproof? Waterproof? How will it keep me warm and is it going to stretch with me?’ I think a big part of REI’s appeal is that it’s a co-op so you get a dividend back, but they also put a lot of time, energy and effort into having knowledgeable salespeople who have expertise and can provide education. Outdoor retailers are not just selling you gear, they are providing a gateway to the outdoors.”

But REI’s take on its newfound style status?

Said Stadelman, “I think fashion is important and we recognize that our current customer cares about personal style. We have new lines seeking to address that, but for us, it’s actually more about versatile product and being able to be spontaneous when you are getting outdoors that you can wear throughout the day instead of saying, ‘This is my outfit to do my outdoor thing now.’”