The working-class town, home to about 80,000 people and just inland from the Gulf of Mexico, is the big city she grew up visiting, and where she spent Thanksgiving with family. She rented her first home in Lake Charles. She met her boyfriend, Ryan Beeson, at the Panorama Music House downtown. She can tell you the best place to get a po' boy, hold a baby alligator or crab off dry land.

But Ms. Duncan’s resolve to stay in the city has been shaken by the series of hurricanes that have devastated the place and much of the surrounding area this year. Thousands of residents remain displaced, and aid — in the form of charitable giving and volunteers — has been hard to come by with the whole country struggling with coronavirus outbreaks and distracted by politics. (The mayor, Nic Hunter, has worked to spread awareness of the state of his city, appearing on CNN, Fox News and NPR, where he told listeners, “I am begging, I am pleading for Americans not to forget about Lake Charles.”) 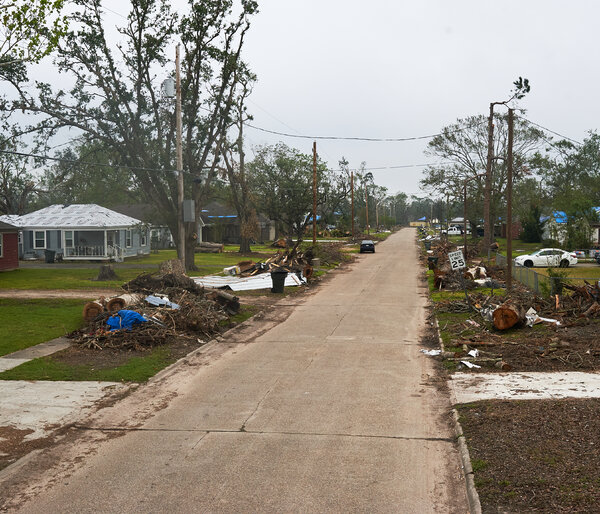 It has Ms. Duncan questioning how she will continue to do the job of promoting the place she loves.

“The reality is, what product do we have to pitch?” she said. “What event? What’s open? We know that all of our hotels are going to be filled till the end of the year with utility workers and first responders. And then, sooner or later, with families who have been displaced.”

It has also shifted her thinking about her own future. (Lake Charles is not located on the coast, but it is still affected by frequent storms, a changing coast line and sea level rise.)

Hurricanes One and Two

Before the storms, Ms. Duncan’s job was to pitch stories to out-of-state writers and reporters about Lake Charles and Southwest Louisiana, including about the Creole Nature Trail, a scenic byway that lets visitors walk through Louisiana tall grasses and alligator habitats, and Adventure Point, an attraction along the trail where kids can don real-life hunting gear and smell spices used in Louisiana cooking.

“We were still pitching stories during Covid-19,” she said, “but we couldn’t host anyone, because we really just can’t do that safely.” When Hurricane Laura hit, though, her bosses “mainly cared about our well-being and our health.”

On Aug. 25, the night Laura made landfall, Mr. Beeson and Ms. Duncan were at Ms. Duncan’s mother’s house in Crowley, La., a town about a quarter of the size of Lake Charles, and about an hour away by car.

Mr. Beeson woke Ms. Duncan in the middle of the night. “I know you don’t want to see this, but I think you should know what’s going on,” he said, handing Ms. Duncan his phone. It revealed a photograph of the Panorama Music House, completely destroyed.

“Literally, it had just fallen,” Ms. Duncan said. “Like a waterfall.”

The owners had been in the process of building a small museum on the top floor dedicated to the musical history of Lake Charles, which Ms. Duncan was excited to recommend to visitors. (The country musician Lucinda Williams, for example, was born and raised nearby and named one of her most famous songs after the town.)

“I just sat there, sobbing,” Ms. Duncan said. “Grieving for what might be lost.”

That hurricane, a category four storm, ended up displacing more than 6,000 Lake Charles residents. Wind damage left small buildings and big box stores, like Best Buy and Hobby Lobby, in pieces, and tens of thousands of people were without electricity for weeks.

Ms. Duncan’s home survived with minimal damage, but her office had to be gutted. Her neighbor had it much worse. “She had ceiling damage, so they’re gutting her side out,” she said. “She can’t live there. And she’s a nurse.”

Then, in October, Hurricane Delta made a turn for Lake Charles. Ms. Duncan boarded up her house once again, storing her television in her laundry room along with framed photographs of her deceased father.

Ms. Duncan’s family has lived in this region of Louisiana for generations, and have roots going back to the original group of Cajuns who were exiled from Acadia, in Canada, by the British in the 1700s.

Physically, the state has changed a lot since then. In 2014, the map was redrawn to account for a shrinking coastline, and storms are more frequent — and more deadly — than ever. But Ms. Duncan is committed to riding it out.

“We can make it better,” she said. “Through economic development and improving our infrastructure, and having a cleaner environment, and better transportation. You can’t do all of those big things if you don’t stay and work at it day by day.”

“I’m a very future-oriented person,” Ms. Duncan said, sitting in her den in Lake Charles, under a framed, hand-drawn map of the state of Louisiana. “I’m always planning the next five years.”

It stands to reason that Ms. Duncan might eventually want to move to a different city. But Lake Charles is her home, she said. And leaving never felt as alluring as staying put.

“If I were to move somewhere with a million people, it would be almost meaningless to try and make a difference,” she said. “But if I stay here, and am resilient, living in a city of 80,000, where mostly all of them think and act the same, and I’m a millennial who probably does not have the same thoughts and experiences as those around me, I can make a difference.”

October was a different story. With Hurricane Delta baring down on Lake Charles, she and Mr. Beeson evacuated once again, this time to San Antonio to stay with friends. With traffic, the normally five-hour drive took them 12. “To be completely honest with you, I wanted to move,” Ms. Duncan said. “I was frustrated. I was angry that this kept happening.”

But after the storm, Ms. Duncan was overwhelmed with emotion seeing the work her community did together to rebuild. It’s exciting, she said, to be a part of that. There’s a Facebook group for her neighborhood, where people check in on one another, making sure they all have what they need.

“Even our mail lady is in the group,” Ms. Duncan said, “and two days after Laura, she posted that she was on her way home, and that she was going to drop off the mail when she got there.”

It made Ms. Duncan reconsider her frustration. “I was kind of like, OK, maybe I need to chill out, and stay here a little longer,” she said, adding she felt that there was a reason she was here.

Now, back at the satellite office, Ms. Duncan and her team are working on budgeting for the next fiscal year, trying to come up with a plan to sell Lake Charles again. It’s about rebuilding, but rebuilding better, and taking advantage of the new things that might come out of this dark period of the city’s history.

“There may be new restaurants, and new attractions that come from this,” she said. “There’s sort of this unfortunate beauty that might come from this. Maybe the inside of one of our attractions is gutted, and that sucks, but maybe they have an opportunity to reinvent themselves.”

Seeing how Lake Charles has come together in the wake of two hurricanes has only made the decision easier. “It’s more fulfilling now, to be sure,” she said. “It validates why I choose to stay here. Yes, everyone’s lives are in chaos right now. But we’re still checking in on each other, making sure we’re OK. We worry about our neighbors, even in the midst of our own struggles.”

Something about the fact that there are many obstacles ahead makes Ms. Duncan more dedicated to the place. “If I were to leave, I would be a different environment and all that,” she said. “But by staying, I’m constantly challenging myself. It’s that constant, daily challenge of thinking, what can I do better? How can I make this place better? How can I leave it better for the next generation?”