Though it might seem, in light of all that is going on currently in Washington, D.C., the least of the matter, on Sunday a leaked shot of Vice President-elect’s Kamala D. Harris’s Vogue cover set off an unexpected firestorm.

February’s issue features Ms. Harris in a dark jacket by Donald Deal, skinny pants, Converse and her trademark pearls. She stands against a leaf green backdrop bisected by a spill of pink curtain, colors meant to evoke her Howard University sorority, caught in what seems like mid-laugh, hands clasped together at her waist.

The image was shot by Tyler Mitchell, who, in 2018, became the first Black photographer to shoot a Vogue cover (his subject was Beyoncé) and is known for his unstudied aesthetic. Though Gabriella Karefa-Johnson receives credit as the sittings editor, aka the fashion editor in charge, Ms. Harris chose and wore her own clothes. The selected photo is determinedly unfancy. Kind of messy. The lighting is unflattering. The effect is pretty un-Vogue. “Disrespectful” was the word used most often on social media.

As the maelstrom of public hot takes began to swirl, Vogue released another, more formal portrait of Ms. Harris in a powder blue Michael Kors Collection suit with an American flag pin on her lapel, her arms crossed in a sort of executive power pose against a gold curtain — the “digital cover.”

The journalist Yashar Ali wrote that this was the print cover Ms. Harris’s team had expected, and that, like the internet opinionators, her people were unhappy with the more casual shot. Vogue was seen as acting in bad faith.

But according to people familiar with the arrangement, both scenarios had been agreed on in advance, from clothes to backdrops. However, while the portrait had been deemed the “cover try” (magazine-speak for the intended, but not definite, cover) and the standing shot conceived as the inside photograph, Vogue had not granted any kind of contractual cover approval rights to Ms. Harris. That meant Ms. Harris’s team had not seen the final choice, which was left to Vogue, and had not known the magazine had decided to swap the photos. 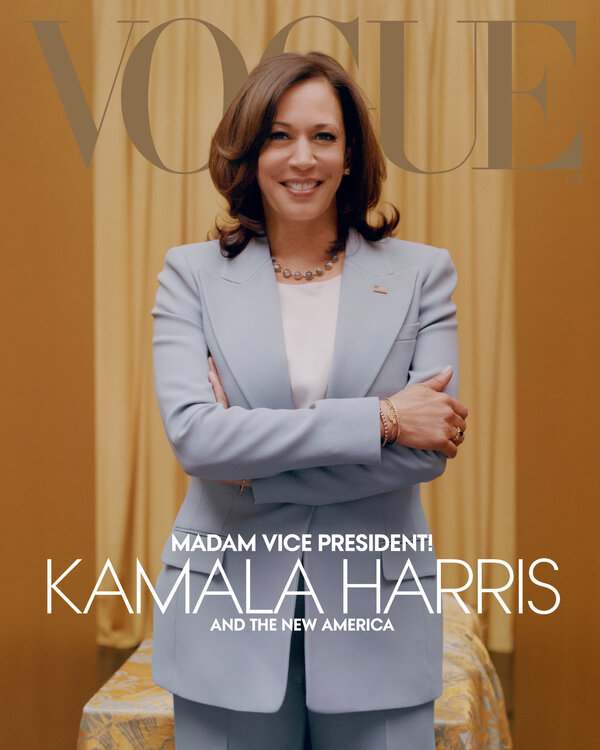 Ms. Harris’s team declined to comment on what happened. The magazine released a statement: “The team at Vogue loved the images Tyler Mitchell shot and felt the more informal image captured Vice President-elect Harris’s authentic, approachable nature — which we feel is one of the hallmarks of the Biden/Harris administration.”

She is, no matter what happens during the Biden administration, a game-changing participant, one that belongs on a pedestal. And though Ms. Harris is not the first Washington insider to be on the cover of American Vogue, she is the first elected official. Which means the cover is automatically a collector’s item. The image is part of the visual record of the country.

So while Vogue might have been imagining its choice as reflecting the modernity of the times, it was also one that contravenes the momentousness of the occasion. Ms. Harris may be the new establishment, but she is still the establishment.

As is Vogue — which is probably part of why Ms. Harris agreed to do the cover in the first place.

It was always going to garner outsize scrutiny. Complicated by Vogue’s own messy history with race. Reports have come out about the magazine’s editor, Anna Wintour, and her own past with staffers of color. Earlier covers featuring Black women such as the Olympic gymnast Simone Biles have caused people to criticize the magazine for its lack of Black photographers and for not understanding how to light Black women (an issue that also came up in regards to Ms. Harris). All of that, filtered through the lens of systemic racism in this country, guaranteed that the magazine’s portrayal of Ms. Harris would be especially fraught.

Before Ms. Harris, of course, came such women as Michelle Obama (three Vogue covers) and Hillary Clinton (the first first lady to appear on Vogue’s cover) — though not Melania Trump (or at least not Melania after her husband was elected; she appeared on the Vogue cover in her Dior wedding dress in 2005). They were all, however, first ladies when they appeared on Vogue; their job was, in part, to be the accessible side of the first couple. Fashion was a widely accepted part of that role.

And though the Vogue cover is not Ms. Harris’s first fashion magazine cover — she also posed for Elle during the campaign — it is her first cover since being certified as the next vice president. Style has always plays a complicated part in the public imagination when it comes to our female elected officials, given the history of using dress as a way to undermine women. This just ups the stakes.

It’s why there was such an extreme reaction to Alexandria Ocasio-Cortez’s Vanity Fair cover and photo shoot. The congresswoman from New York was somewhat hysterically criticized for posing in expensive fashion by such brands as Loewe and Carolina Herrera — choices that, while not her own, were seen as running counter to her political positions and undermining her (she was also shot, probably not coincidentally, by Mr. Mitchell). Politicians are often castigated when they seem too airbrushed, or seduced by the elitism associated with fashion.

And it may be why such world leaders as Angela Merkel and Theresa May avoided the issue entirely. Why Ms. Harris doesn’t engage with questions about what she wears, and the designers who have dressed her also refrain from commenting. And also why, in the long profile that accompanies the Vogue cover by Alexis Okeowo, there is almost no mention made of fashion. (Jacinda Ardern, the prime minister of New Zealand, is a rare exception, having appeared on one cover of British Vogue’s Forces for Change issue, but she was photographed in black and white and close up.)

Yet we remain very invested in the images our leaders and role models convey and it continues to influence our own understanding of how authority looks and identity evolves. Ms. Harris’s election is personal to so many. Any cover was also going to be taken personally. And though no one was happy with this one or the reaction, it did do us the service of revealing how deeply we care.