IT'S a tough job but somebody's gotta do it – and when it comes to bursting cysts, that person is Dr Pimple Popper.

But during a recent appointment, even the LA-based dermatologist got a little more than she bargained for. 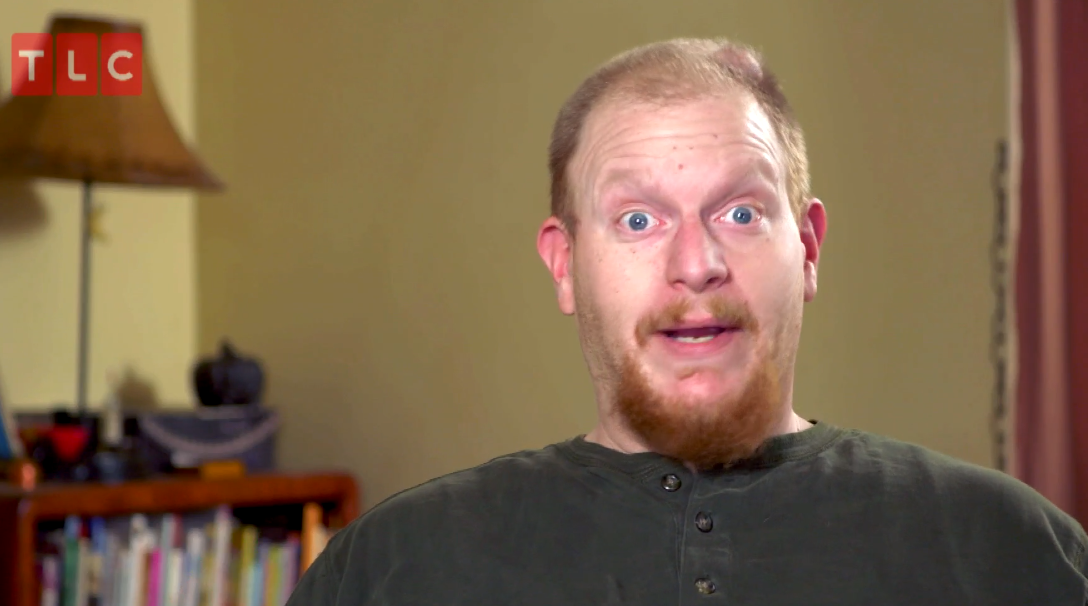 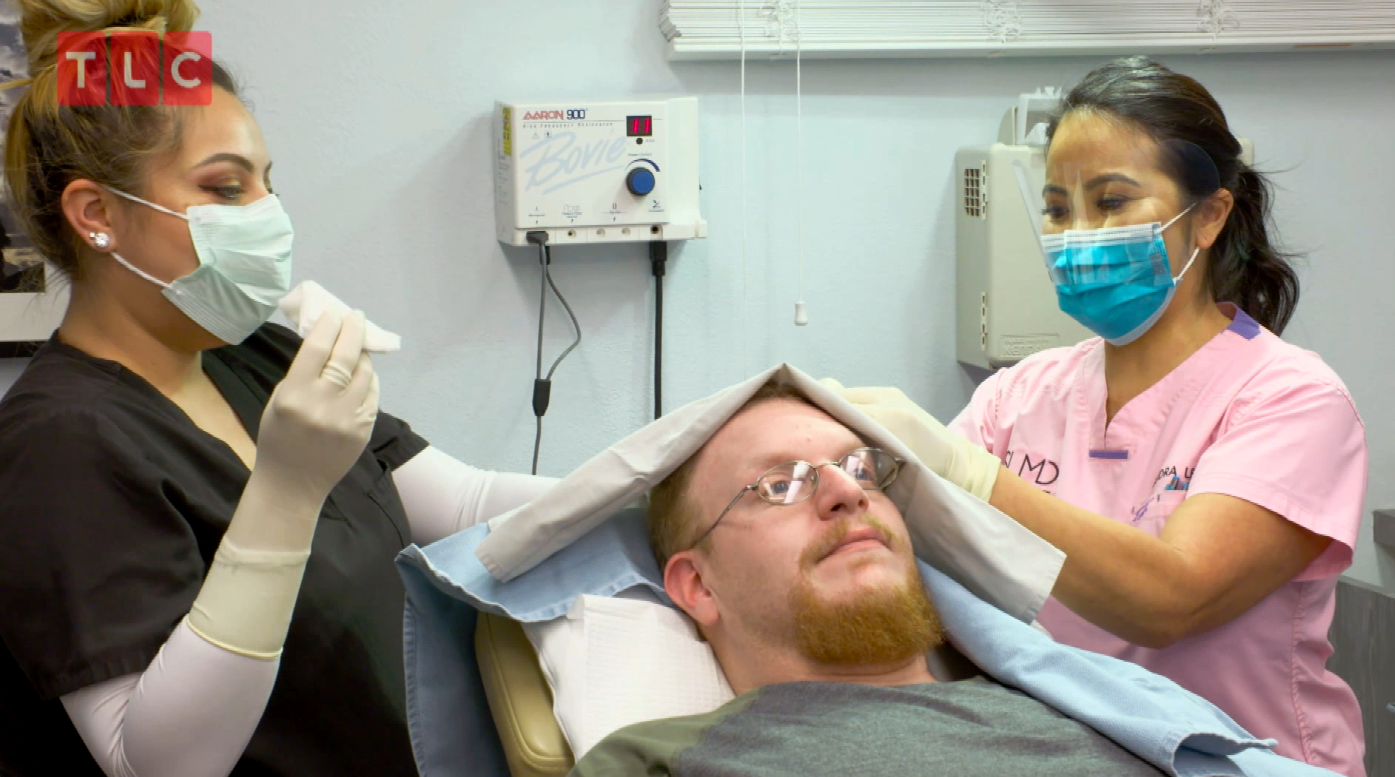 In the latest episode of her TLC show, Dr Pimple Popper – real name Dr Sandra Lee – ends up getting sprayed with pus from an exploding cyst.

She had been helping out Eric, from Cheektowaga, New York, who had come to see her about a big bump on his head.

The 34-year-old construction worker developed the lump around eight years ago after getting hit on the head by a machine at work.

He said: “About eight years ago I was at work and I was struck by the bucket of an excavator.

"I woke up on the ground and I had a big goose egg on my head.

"It just never went away, and it started getting bigger and bigger, cartoon style – and here we are today."

Not only does the bump get in the way of everyday tasks, it’s also incredibly tender, and Eric admits that it causes him a lot of discomfort.

“It’s very painful now. If I’m doing something and I hit it, it’s the equivalent of taking a fork and poking yourself in the head, real quick but real good,” he says.

Even with his wife Ronelle and 10-year-old daughter Evie by his side, Eric is nervous about rupturing the bump.

“I’m always aware that the bump is there. If I do hit it hard enough, I’m definitely worried about it rupturing or even an internal bleed.

"It could turn into something worse.” 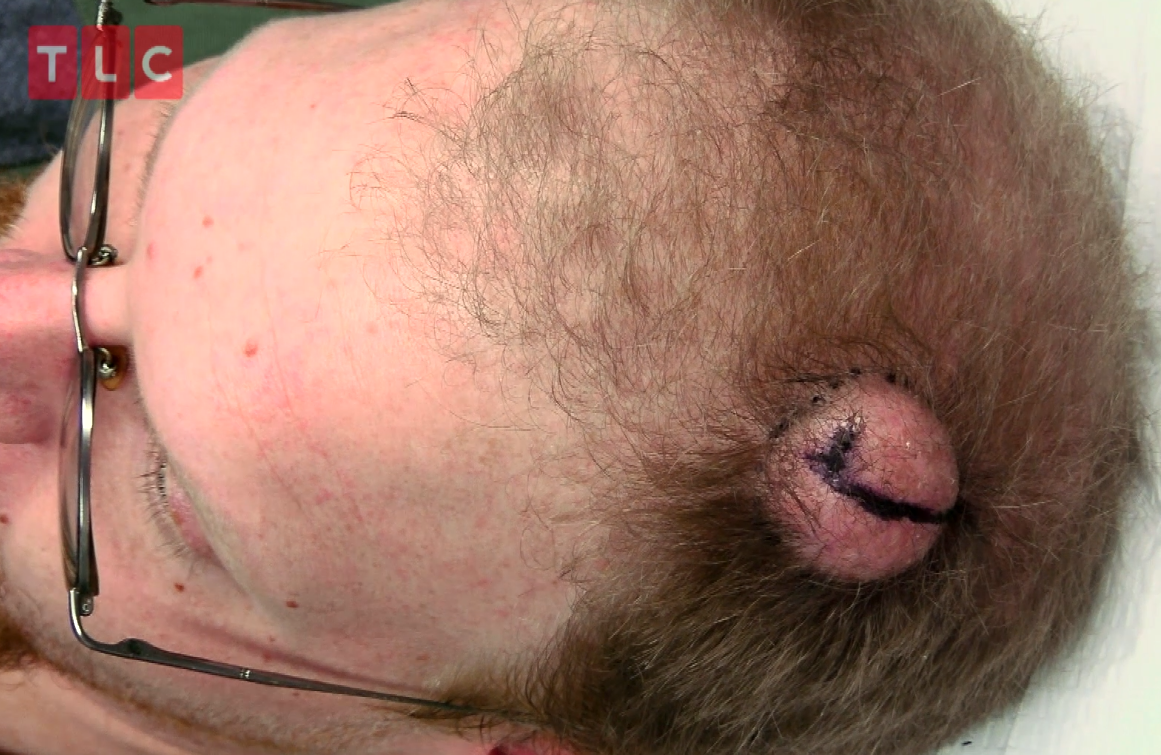 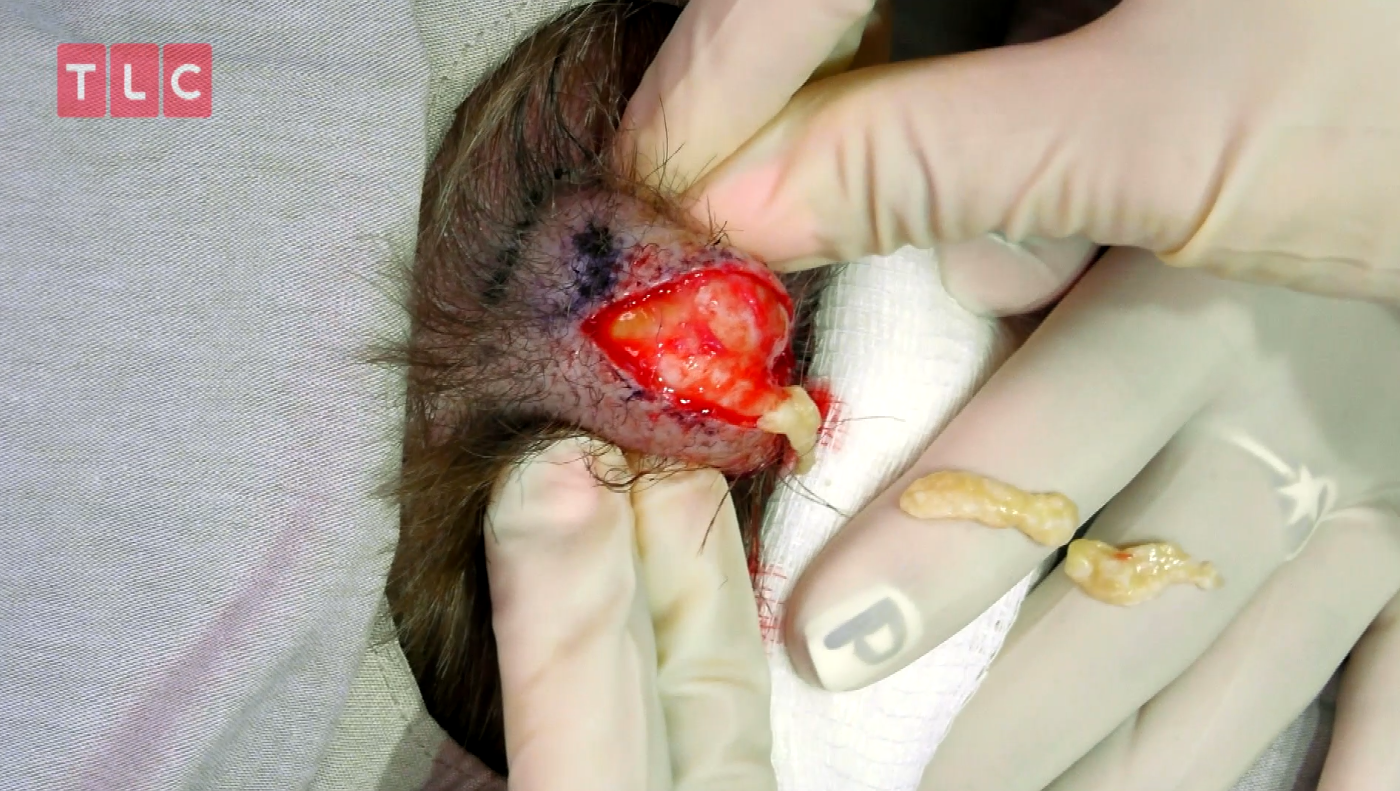 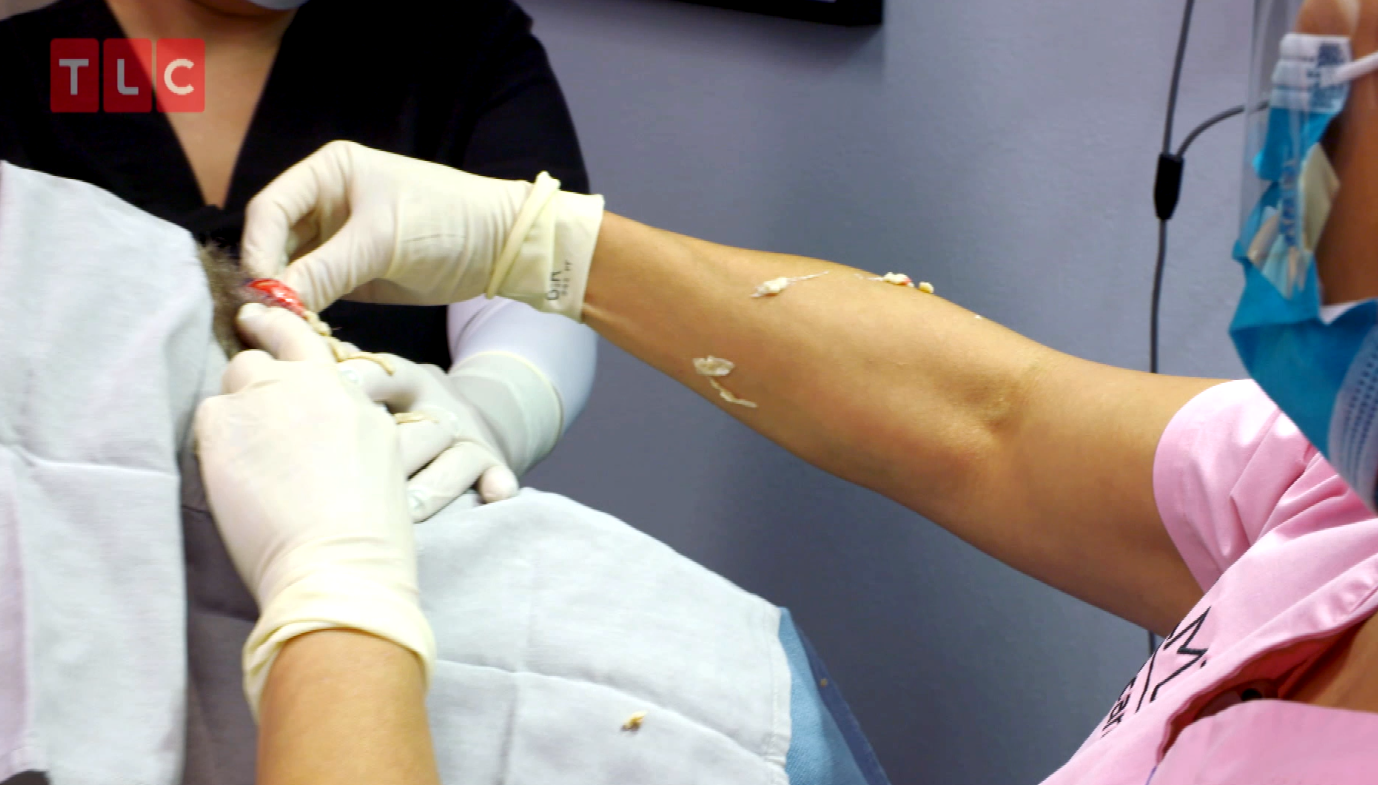 Despite all of the grief the bump causes Eric, it has brought him and his daughter closer together.

“The bump is something my daughter and I have shared because it’s been there the entirety of her life,” he says.

“We play this silly game, the Daddy power on, Daddy power off button. She’ll tap the button and I’ll shutdown for just a second.

"It’s small and it’s stupid but it makes the both of us ridiculously happy.”

Finally ready to say goodbye to his lump, Eric arrives at Dr Sandra Lee’s LA clinic to have it removed.

After having a go at pressing Eric’s "power button" herself, Dr Lee offers her spot diagnosis.

She tells him: “It looks like what we call a pilar cyst, a benign growth that occur predominately on the scalp.”

Dr Lee says she is able to remove the bump there and then and prepare Eric for surgery. 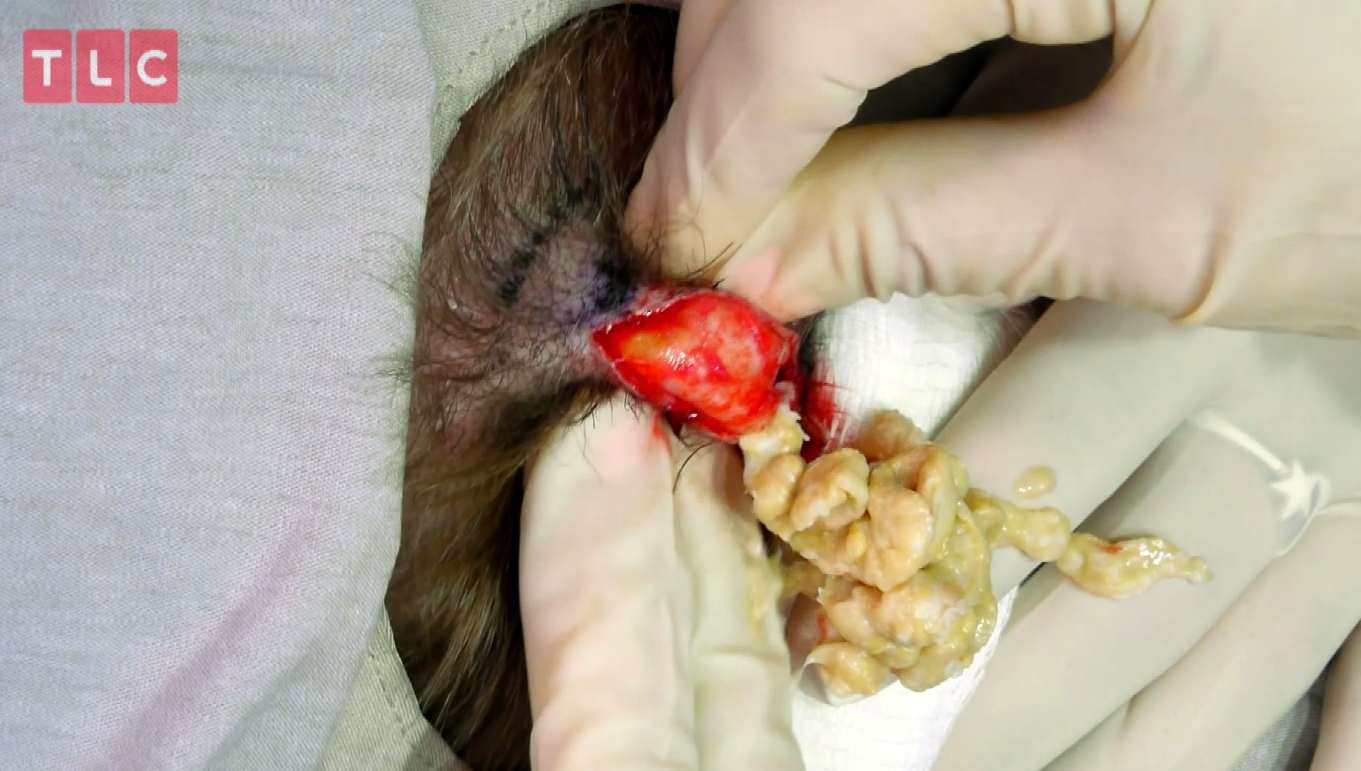 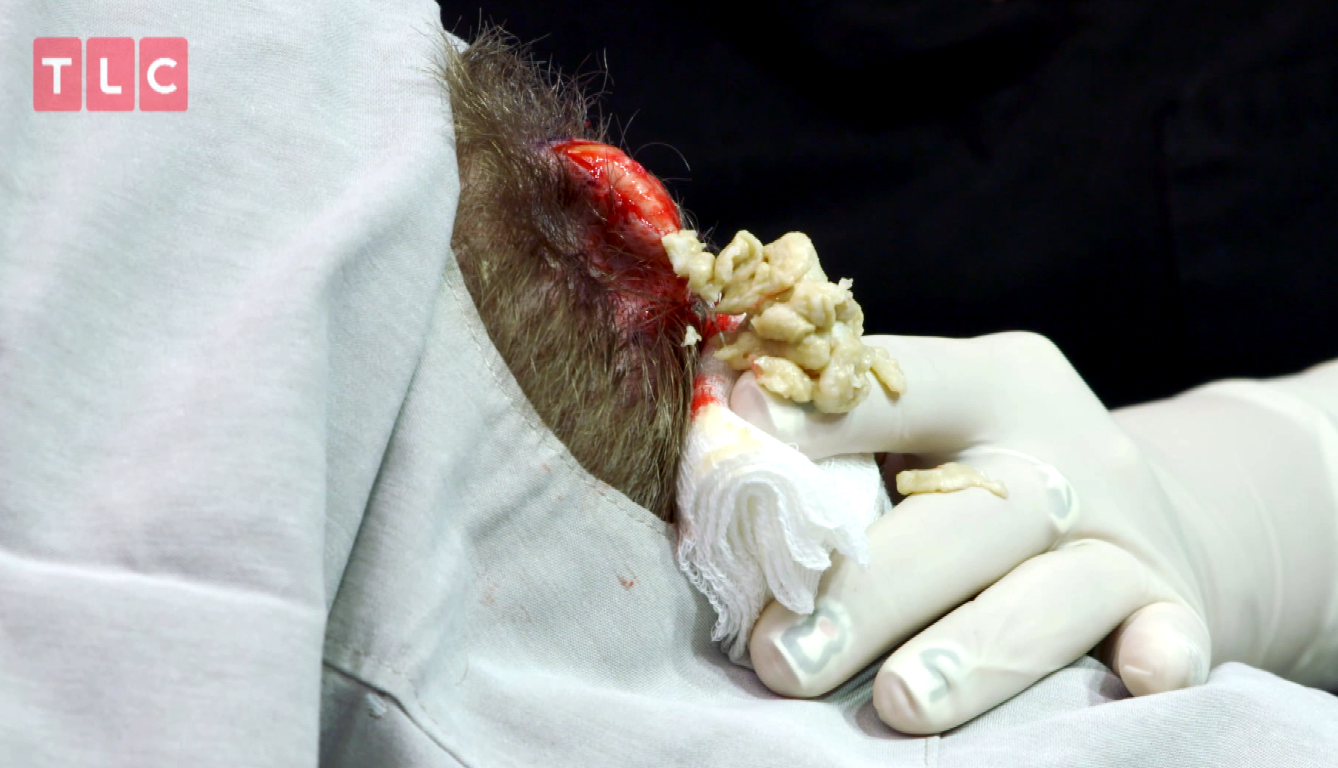 But it’s a bittersweet moment for Eric, who is glad to get rid of the bump but will miss playing with his daughter.

He said: “Saying goodbye to the on/off button is bittersweet because is something might daughter and I have shared, but it shouldn’t be there so I do hope Dr Lee is right.”

After numbing Eric’s scalp, Dr Lee makes a small incision and confirms that it is a pilar cyst.

All that is left to do is squeeze the contents free.

What is a pilar cyst?

Pilar cysts are flesh-colored bumps that can develop on the surface of the skin.

These are benign cysts, meaning they typically aren’t cancerous.

Although 90 per cent of pilar cysts occur on the scalp, they can develop anywhere on the body, including the face and neck.

These cysts usually develop without causing any problems.

However, it’s possible that a cyst may rupture on its own or as a result of trauma.

However, many people consider removal options for cosmetic reasons or due to general discomfort caused by the cysts.

“Watch out, it might be a little bit under tension,” Dr Lee says as she starts squeezing.

Suddenly, the cyst bursts – spraying Dr Lee with thick, gooey white pus all up her arm.

Speaking to the camera, she says: “Pilar cysts are probably the cysts that tend to get me the most, and that’s because it has a thicker wall sac and it’s particularly satisfying to squeeze it and get it out whole."

After emptying the cysts rotten contents, Dr Lee snips away at the sack, finally freeing Eric of his eight-year-old good egg.

“I’ve had this thing for a decade and just suddenly it’s gone. One last thing to worry about."

A whole month after his procedure, Eric feels and looks like a new man.

He’s ready and able to go out into the world and try new activities with his daughter.

“Now that the bump is gone, and I’m not feeling that pain and everything, I feel free,” Eric says.

“My daughter and I, we don’t have the Daddy power on button anymore, but we can always come up with another game."