A MAN who thought it would be a good idea to see what it's like being pregnant for a day has gone viral online after he failed to even make it out of bed.

The video has been liked over 1million times on his TikTok channel, Maitland Hanley. 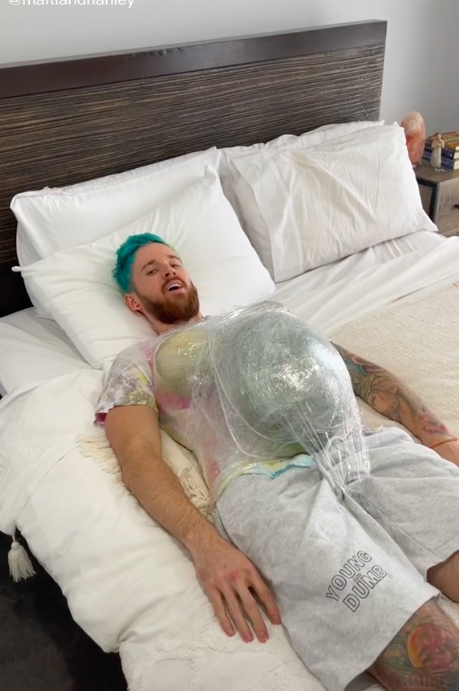 Some women find pregnancy a breeze and adore every minute of the experience of being pregnant, enjoying strange food cravings and glowing skin.

But others will tell you that pregnancy is absolutely not a walk in the park, with the morning sickness and extra weight of a baby growing inside of you.

Plenty of men have said they could 'handle being pregnant' and after recently having a baby with his partner, Maitland Hanley decided he would give it a go for a day.

He uses three melons and clingfilm to create his baby bump.

In the video, he is lying on the bed ready to start his day as a pregnant woman.

A woman in the background starts making beeping noises to mimic an alarm going off and tells him to get up for the day.

Confidently, he says; "watch this," as he believes he will be able to do the first step in his busy schedule.

Maitland attempts to swing his body around to an upright position, but is held down by his pregnant stomach, watermelon contraption.

He tries again and this time manages to get his feet on the floor, but again he instantly fails when trying to get the top half of his body to sit upright.

As Maitland lies on the bed rolling around trying to find a manoeuvre that will work, his friends are dying of laughter in the background.

At the end of the video he admits that he thought it would be so much easier than it was.

One user wrote: "Why is he not using his hands! Pregnancy took his ability to think!"

Another replied: "Me, a mum of two yelling over here: you just gotta commit! Hard roll and grab the edge for support!"

A third user responded: "I love the fact you've gone the extra mile with cantaloupes (reality)." 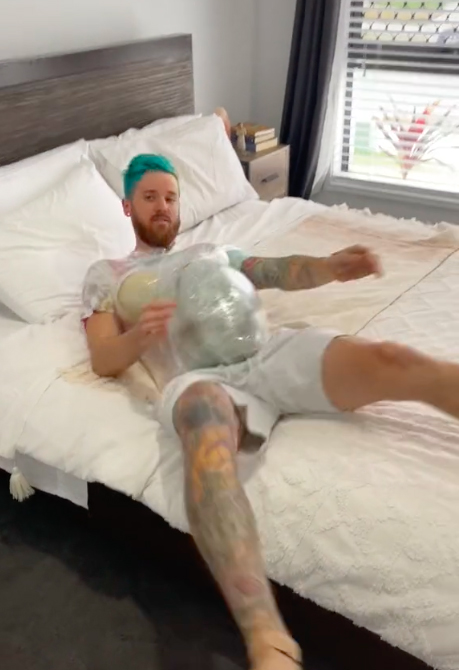 Plus how this dad got his kid's to FINALLY clean their rooms using black rice.

And mum fed up with ex's step kids wearing her kids clothes shows how she stopped it happening but is slammed for being 'petty'.

Meanwhile a dad reveals he is terrified after his daughter claims she has a past life.