GETTING a tan without setting foot in the sun? If I don’t have to sweat to go brown – and damage my skin in the process – then I’m up for it.

Better still, if it involves eating gummy bears then what’s not to love? 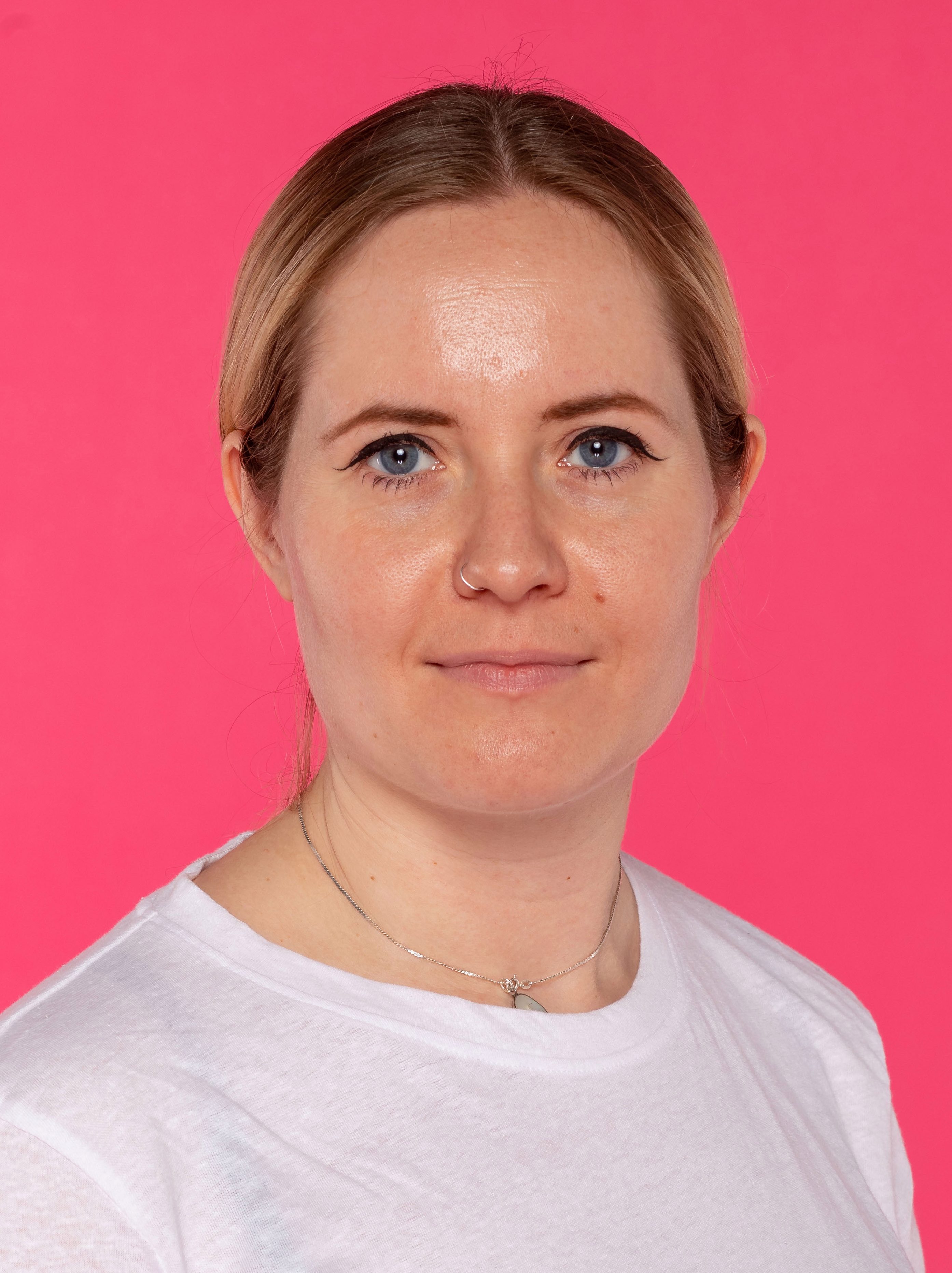 Tanning brand UTAN has brought out a new range of “tanning gummies” that promise to make you go "a light golden colour" without seeing a ray of sunshine, in one month.

They claim that ingredients such as beta-carotene, copper and vitamin C are “directly absorbed” though the membranes in the cheeks when you eat the sweets and will make you glow.

They also contain vitamins like zinc and vitamin E, so it’s basically like eating an amped-up chewy vitamin.

I’m naturally very pale – think roughly the colour of an A4 sheet of paper – and though I do tan, it takes a while. 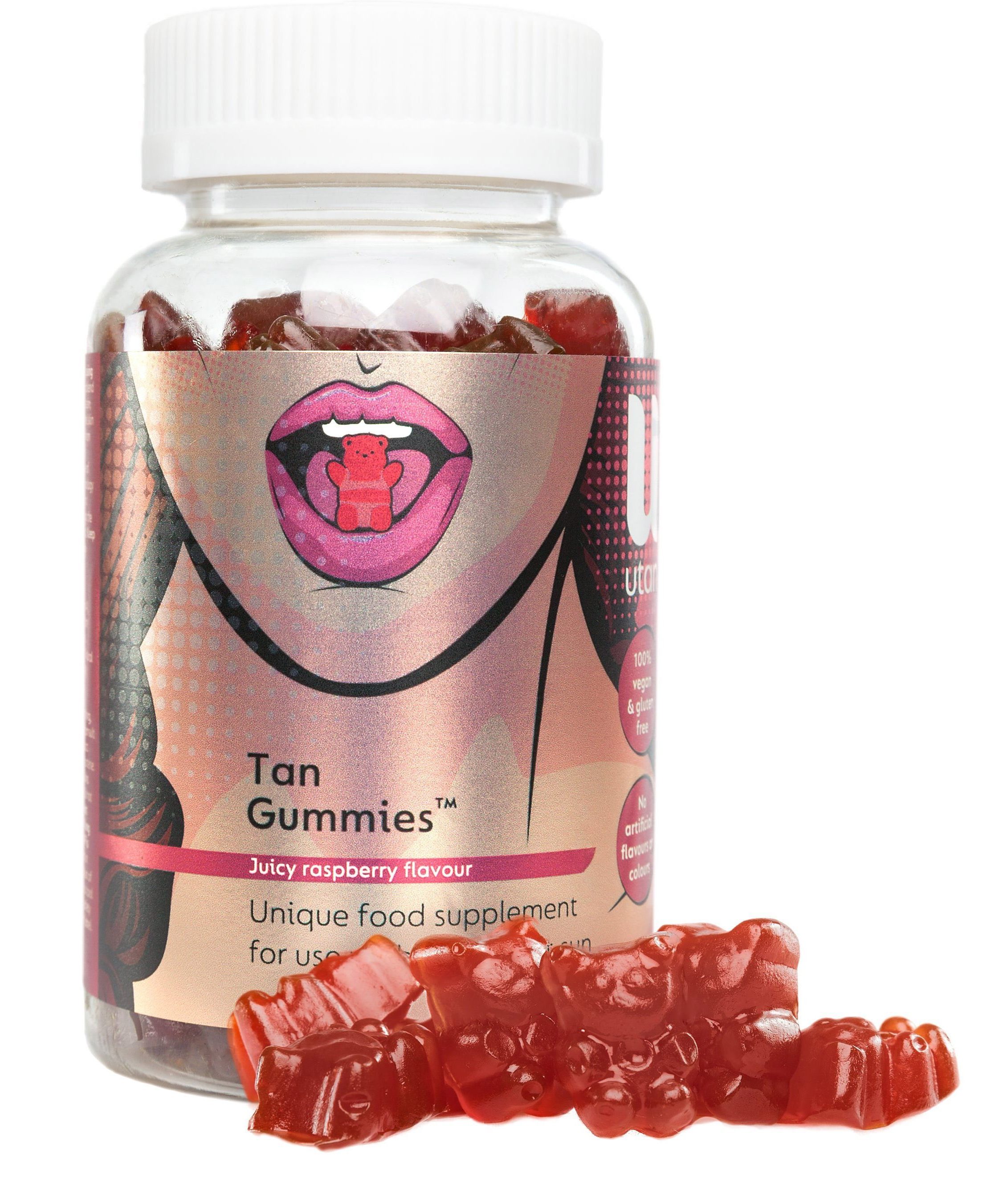 The raspberry-flavoured gummies are vegan friendly, too, unlike most Haribo – and they taste delicious. I’m in.

Getting the glow: Week One 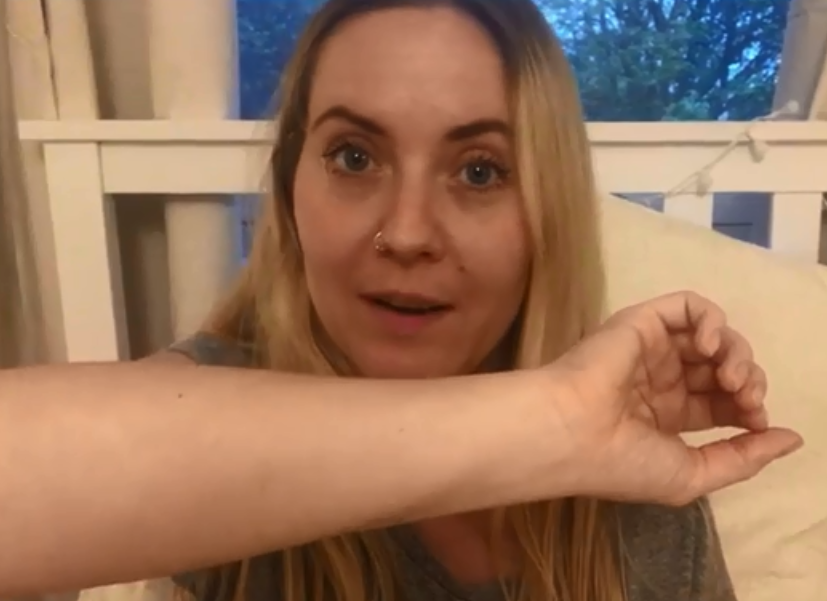 You’re meant to eat two to three gummies a day to develop the colour, but they’re so yummy that I have to stop myself from eating way more.

If you’re into jelly sweets then you’re going to love these bad boys.

They’re meant to be sucked, but it’s hard not chew on them as they taste so good.

I can’t say that I notice any difference at all in the first week – but there are certainly no side effects.

The only thing I am left wondering is my diet – or teeth – are going to suffer as a result.

"[UTan] appears to be a supplement which means there’s no legal requirement to adhere to any particular standards of manufacture.

"That aside, it’s well known that carotene compounds, which seem to be the main active ingredients, do turn the skin orange.
"Carrots are of course the main natural source of carotenoids. The skin of people who eat a lot of carrots is often yellowy -orange."

So if you're after a golden glow this summer (without a "yellowy-orange" hue), the most surefire way is to invest in a good old fashioned fake tan product. 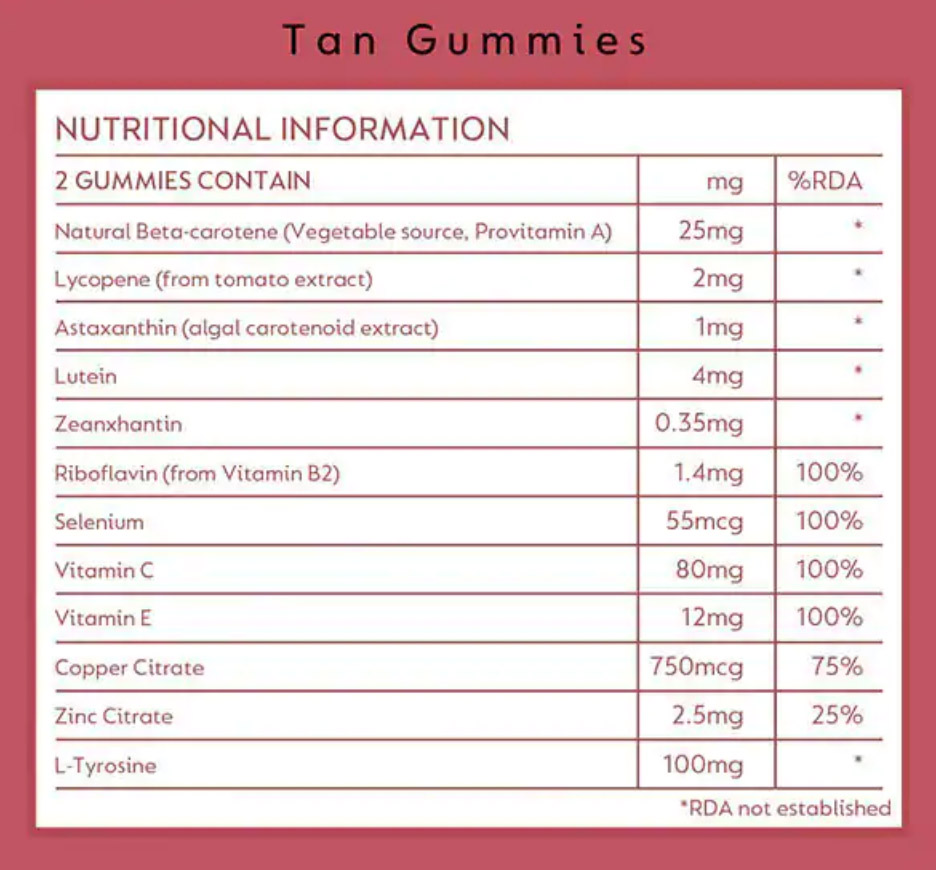 I’m still looking extremely pale at this point, and the weather sucks, so it’s not like I’m getting any kind of sneaky sunbathing in.

The gummies aren’t exactly cheap – they cost £12 (currently on offer from £18) for a month’s supply – and while I’m going to keep on with the experiment, I can’t help but think that maybe it’s better investing in some fake tan for definite results. 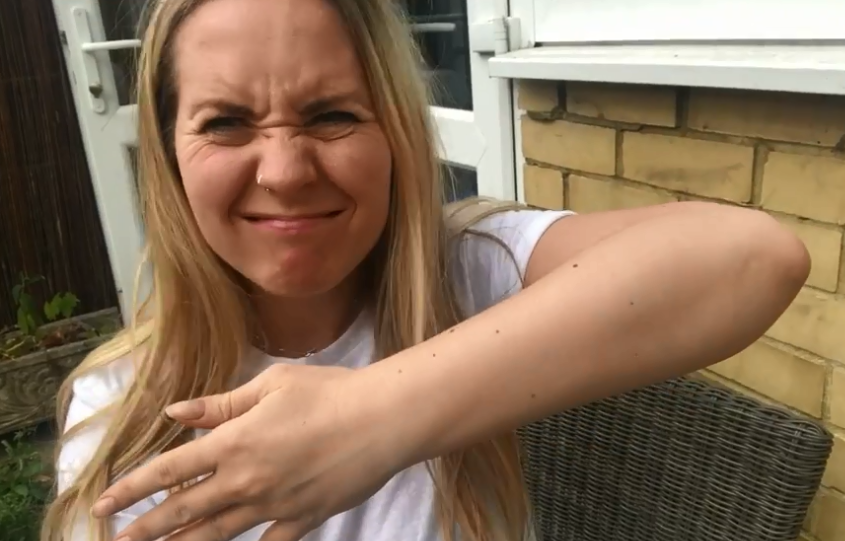 I’ve started to notice that there’s a bit of a glow around my face.

These gummies are never going to give me a tan like Katie Price or Gemma Collins, but I’ve noticed my face, especially my forehead and cheeks, looks a bit darker.

In fact, you could almost say that my forehead looks a little bit ORANGE in certain lights.

With carrots containing beta-carotene, like the gummies, let’s hope that I don’t go orange all over.

We’ve all heard the story about the girl who only ate carrot soup and turned orange.

My mum tells me that she thinks I look a bit browner, too.

Whilst I would never say I was tanned, I can definitely see that I’ve got a bit of a glow. 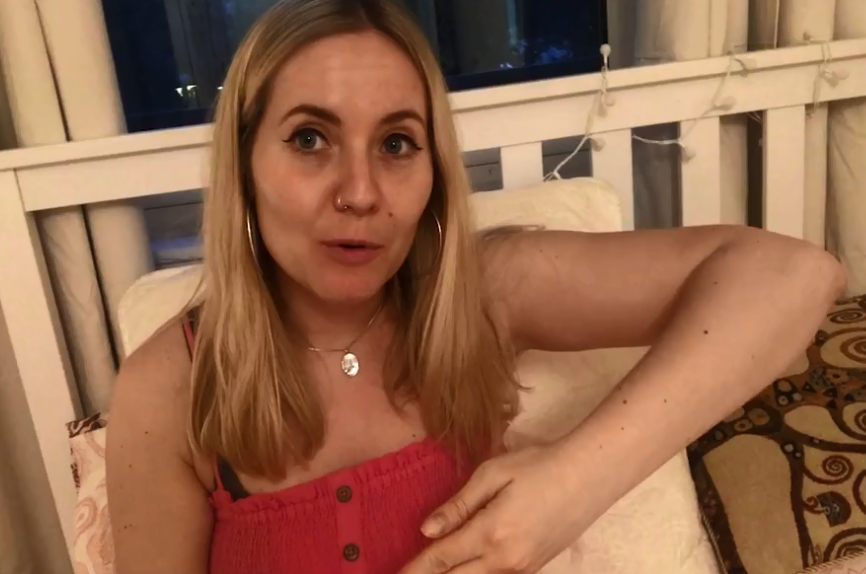 For the final week of the experiment I crank up the dose. It’s worth mentioning that the bottle advises you don’t take more than three a day, but I start chowing down on six of the gummies, which is no problem as I love how they taste.

My face is still looking glowy, and I’ve noticed a difference in my hands and arms, too.

It’s not loads, but it is there. 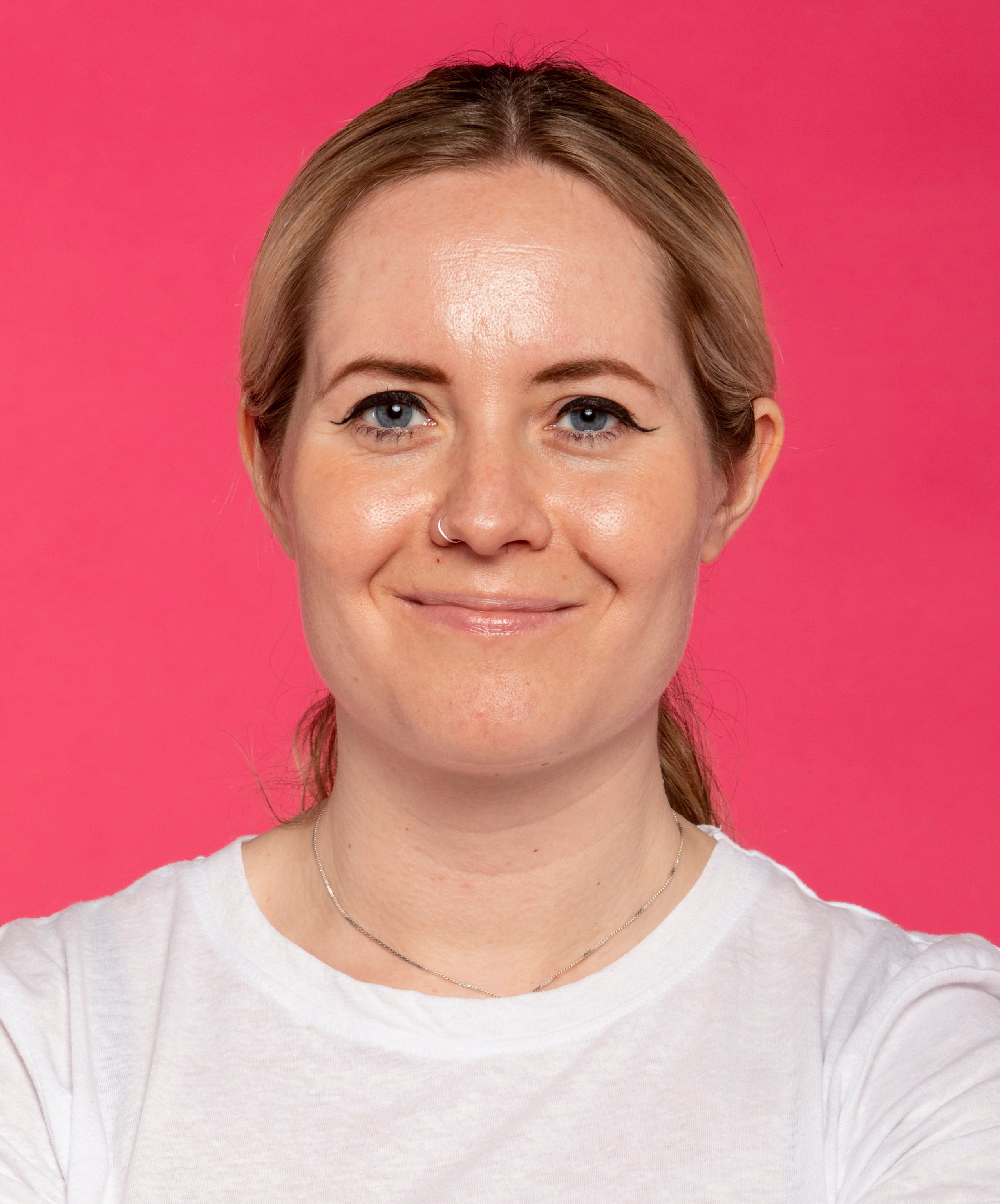 My skin now also has a good base colour – though it’s hardly Towie-worthy.

I’m off on holiday to Italy this week, so it will be worth checking if I tan more easily now that my skin has built up a bit of colour this way.

I have a feeling that I will go much darker as a result of the gummies when I do get into the sun as the reviews they get online are amazing.

These gummies definitely do something without sun, it’s just not dramatic, but it is a result, and it’s without any of the dangers that sunbathing brings.

It’s just up to you whether you want to fork out £12 a month to try them. I'd give them a three out of five.

As said on the bottle, without sun the gummy bears will give a glow but with exposure you can expect more of a tan to build up (in most customers much faster than without).

Without sun the tan gummies give a subtle glow. Customers describe this like a warmth to the skin, amazing for cancelling out pale pink tones and not having to wear foundation.

Customers see enhanced results with any exposure making them perfect for garden sun in the summer.

The Tan Gummies are legal, safe, all natural and good for the body.

Whilst realistically they aren’t going to give a dark ‘tan’ like melanin injections without any exposure, they are a really safe alternative to enhance your glow or to help build a real tan with much less exposure.

If you have a holiday planned our Vaycay Gummies can be taken either on their own for a few days before exposure and can ‘boost’ the Tan Gummies.

We always recommend that you still continue to use your regular SPF making these a no brainer for the summer months.

Many customers have been impressed by the UTAN gummies, when taken prior to going in the sun.

Mollie Hallan, 18, from Loughborough, shared a photo of her impressive tan, which she claimed was made possible by the "game-changing" bears. 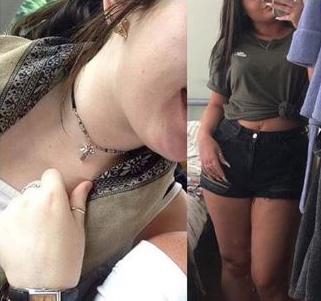 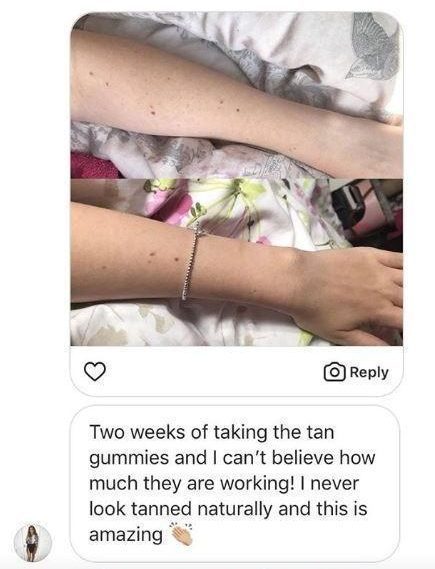 Kim Wilton, 32, also sung UTan's praises, adding: "Two weeks of taking the tan gummies and I can't believe how much they are working! I never look tanned naturally and this is amazing."

Other customers have even claimed they had "definitely noticed a difference after only a few days."

But not everyone was impressed. Writing on Superdrug, Sarah Lou called them a "waste of money", adding: "After 8 weeks I 'think' my arms are a tad different but not sure if it's wishful thinking – my legs (which I wanted it most for) are exactly the same… I am on the paler side so am guessing the good reviews are from people that aren't?"

While Jackie wrote: " I am now on my 4th bottle and there has been absolutely no colour change what so ever! Maybe they might work as a enhancer when used on sunbeds or sunbathing somewhere with alot of sun but they do not work on their own as stated on the bottle!"

For even more tanning tips, follow our top Tan Commandments for getting the perfect golden glow this summer.

And this luxury self tan oil sold out within 48 hours of launching… but here's how you can pre-order it.

This is everything you need to know about tanning safely in the sun.