Jax Taylor says he’s making sure that wife Brittany Cartwright knows how beautiful her pregnant body is, reassuring her that the changes in her figure make her lovely.

A woman’s changing body during pregnancy — especially for the first time — can sometimes lead to insecurities. Fortunately Vanderpump Rules star Jax Taylor is making sure wife Brittany Cartwright knows she looks stunning in her evolving maternal state. The 41-year-old appeared on the November 24 episode of the Give Them Lala … With Randall podcast and explained, What I think is extremely important and what I’m going through now with Brittany is just reassuring Brittany how beautiful she is.”

“She’s already beautiful, she’s already gorgeous, but I always see Brittany looking at herself and I know in her head she’s just thinking sometimes I think that she’s not pretty,” the father to be explained. The couple announced on Sept. 21 that they are expecting their first child, and by that point Brittany already had a noticeable bump. The pair is having a baby boy.

Randall and Jax were able to commiserate on the subject, since Randall’s fiancee and Jax’s VPR co-star Lala Kent is expecting as well, sharing her baby news on Sept. 2.  After Randall said he was surprised that Brittany would imagine herself to be anything less that the stunner that she is, Jax told him, “We all know that. I know that, you know that, you know your wife, but you know their bodies are changing and they’re not used to that and they’re very insecure.”

“They know they’re excited to be moms, but at the same time, they’re like, ‘Am I gonna get back into that bikini again?’ You know, that kind of stuff,” Jax explained. “And that’s the thing that I have to reassure her a lot and I love doing it. I do it anyway, but it’s super important for new dads, I think, just to make sure to let your wife know how beautiful she is at all times.” 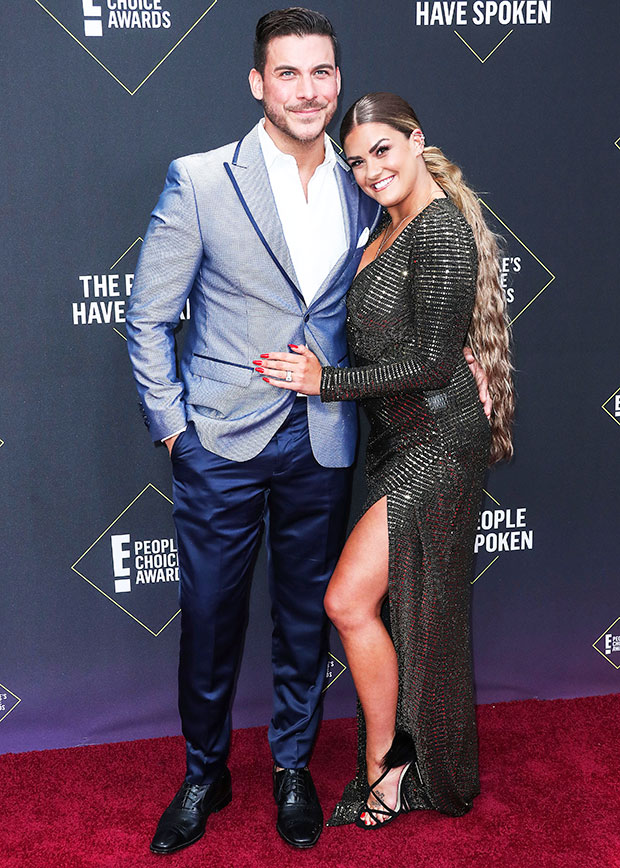 Jax and Brittany tied the knot in her native Kentucky in June 2019. The couple was the subject of pregnancy rumors over the summer of 2020, when they were boating in the Bluegrass state on July 17 with pal Kristen Doute, and Brittany made sure to cover up her mid-section, despite wearing an aqua bikini. But then several weeks later on Aug. 3, she and Jax went out to dinner and Brittany wore an off-the-shoulder crop top with tight jeans, and there was no sign of a baby bump. But it was there on Sept. 21, when Jax and Brit showed off sonogram photos to announce that they have a child on the way.

Brittany revealed on Nov. 1 that she was 16 weeks along, though the revelation came because she was clapping back at some trolls over her bump size. In an Instagram stories post she noted, “All baby bumps at 16 weeks are different. Believe it or not, some women don’t really show at 16 weeks pregnant, while others have pronounced bumps. The wide variety of baby bumps can be attributed to everything from a woman’s size and shape to whether this is her first pregnancy or her second, third or fourth. Whatever you do, don’t compare your 16 weeks pregnant belly to anyone else’s.” She then added, “Some of y’all are just sad and I wish you happiness someday. I am happy and healthy and I’m going to enjoy my pregnancy no matter what the trolls say.”