We all know that Tom Cruise does his own stunts, but this is something else. There he is in an F-18 fighter jet, his billion-dollar face contorted by G-forces, as the whole thing roars off an aircraft carrier in the middle of the ocean.

The only small nod to sanity is that Cruise isn’t flying the jet himself: The US Navy wouldn’t let him.

Otherwise, everything else is real: The plane, the warship, the stomach-turning gravitational pulls. He’s actually up there in the sky going at 1,189mph as the camera rolls. 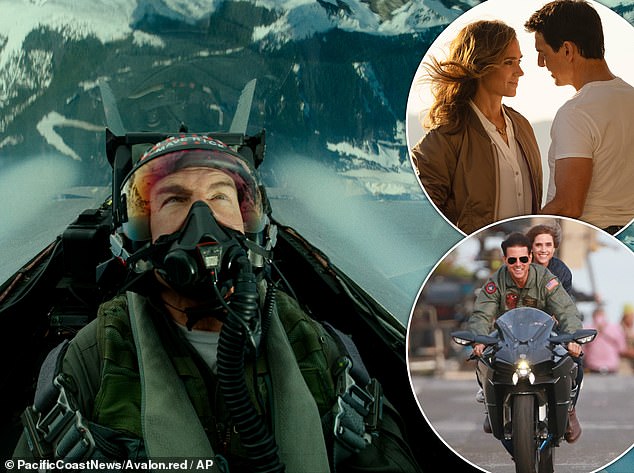 In Top Gun: Maverick, the new sequel to the 1986 original, this kind of macho film-making isn’t just showing off. It’s the point.

Nowadays, they could get computers to do all the work, but Cruise refuses to stand aside. So they just strap him in and watch him go.

In this respect, Cruise has much in common with his character, fighter pilot Pete Mitchell, who doesn’t appear to have changed much over the past 30-odd years. He’s still going by the call sign ‘Maverick’ – and acting the tough guy, too.

After graduating from the Top Gun school all those years ago, he’s stuck to riding his motorcycle, playing shirtless beach sports and flying planes really, really fast. ‘You should be a two-star admiral by now,’ says Ed Harris, playing a military big brass in an early scene. But Maverick remains a five-star rule breaker.

However, if Maverick hasn’t changed, the world of war has changed around him. As Harris warns in his all-too-brief appearance, unmanned drones are on their way to replace pilots.

Meanwhile, the unnamed enemy – Russia? China? Who knows? – now has technologically superior aircraft. America, or perhaps the whole of humanity, seems to have its back against the wall.

Top Gun: Maverick may not do the most thorough job of exploring these unsettling developments. (Maverick’s response to a warning that the future is coming fast? ‘Not today.’)

But they do serve the useful purpose of distinguishing this sequel from the original with all its Reagan-era bravado. Admittedly, there is a lot here that is retread. Soon enough, Maverick is ordered back to train a new generation of hotshots in preparation for a strike on a nuclear facility.

Well, I say ‘new generation’ but, with the exception of a female pilot (Monica Barbaro), they’re pretty much like the old bunch.

There’s the arrogant one (Glen Powell), the nerdy one (Lewis Pullman) and even one (Miles Teller) who happens to be the son of Nick ‘Goose’ Bradshaw, Maverick’s best buddy, who died in the original.

The familiar dive bar returns, and this time it contains a new love interest in the form of Jennifer Connelly. Maverick’s adversary-turned-friend Iceman (Val Kilmer) also shows up in a scene which is touching given Kilmer’s real-life struggles with throat cancer.

All this is ambrosia for nostalgics, but whenever the film threatens to become too cosy, it shocks itself – and us – back into the present with another madly ambitious action sequence.

The final mission, with fighter jets buzzing around a snowscape, is an astonishing display of film-making bravado.

It’s loud, sometimes silly, often crazy. But in the end, the moral of the heart-stopping story is clear: Tom Cruise is a rootin’-tootin’ hero.

The question is: If they wait another 30 years to make Top Gun 3, will he actually look any older?

Top Gun: Maverick is released in cinemas here on May 27