Amid the parade of new trailer reveals during the 2021 DC FanDome, the comic book company announced that a significant change in the iconic Superman motto.

The Man of Steel’s “mission statement” “Truth, Justice and the American Way” — which dates back to the early 1940s, when the U.S. was involved in World War II — will now be “Truth, Justice and a Better Tomorrow” as DC Comics shifts to a motto that “will better reflect the global storylines that we are telling across DC and to honor the character’s incredible legacy of over 80 years of building a better world,” DC Chief Creative Officer and Publisher Jim Lee said in a statement.

“Superman has long been a symbol of hope who inspires people from around the world, and it is that optimism and hope that powers him forward with this new mission statement.” 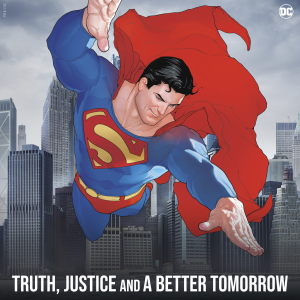 Superman’s new mantra will feature “across all mediums including comic books, film, TV, video games and more,” including the recently announced Superman: Son on Kal-El, where Clark Kent and Lois Lane’s son Jon Kent comes out as bisexual.

Tom Taylor, who wrote the issue, previously said in a statement, “I’ve always said everyone needs heroes and everyone deserves to see themselves in their heroes, and I’m very grateful DC and Warner Bros. share this idea.”

He continued, “Superman’s symbol has always stood for hope, for truth, and for justice. Today, that symbol represents something more. Today, more people can see themselves in the most powerful superhero in comics.”