Elvis for sale: He’s Britain’s No 1 Presley fan who even the King admired. But now, as he struggles to sell the official fan club, will it all end in heartbreak?

One evening in March 1960, a plane touched down at Prestwick airport in Scotland, then a U.S. military base, to refuel on its way back from Germany to America.

A handsome sergeant, in an immaculately pressed uniform, emerged out of the plane.

It was none other than Elvis Presley, then the world’s biggest music star, on his way home after military service. As soon as he stepped on to the Tarmac, he was surrounded by 200 adoring British fans who had flocked there after news leaked of his imminent stop-over.

It was The King’s first visit to Britain and, although he promised ‘I’ll be back!’, it turned out to be his last. 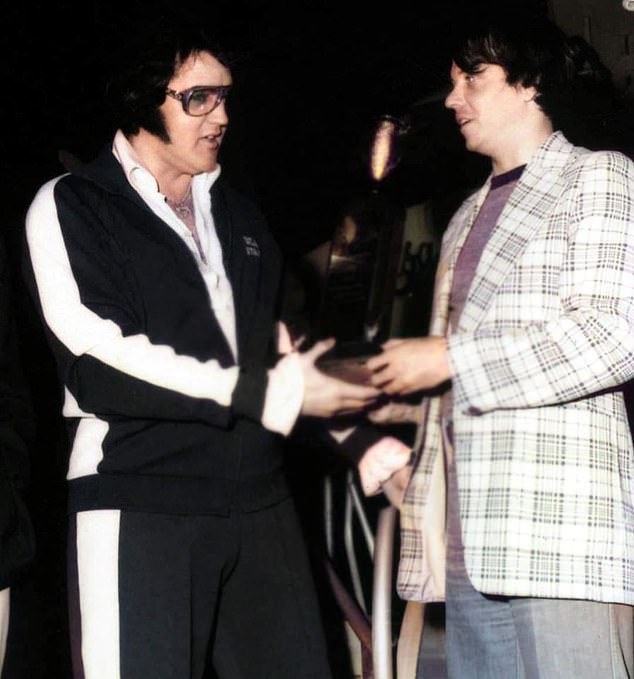 For, despite his huge popularity in Britain, and strenuous efforts to get him to perform here, Elvis never returned.

Regardless, the enthusiasm of the British fans has never been in doubt — and none has been more devoted than Todd Slaughter, the owner and organiser of The Official Elvis Presley Fan Club of Great Britain for nearly six decades.

Only now, at the age of 76 and in poor health, has Todd decided to retire: as soon, that is, as he has found the right person to become custodian of Elvis’s legacy in Britain.

This week, the fan club — comprising stock, database, office equipment, social media accounts and more — was put up for sale by Omega Auctions in Merseyside, which specialises in music memorabilia. But the bidding reached only £32,000 — nowhere near the estimate of £50,000 to £100,000 — so Todd’s hunt for a successor goes on.

There were several keen buyers, but when they realised that running the fan club was a full-time job taking up at least 40 hours a week, they melted away. 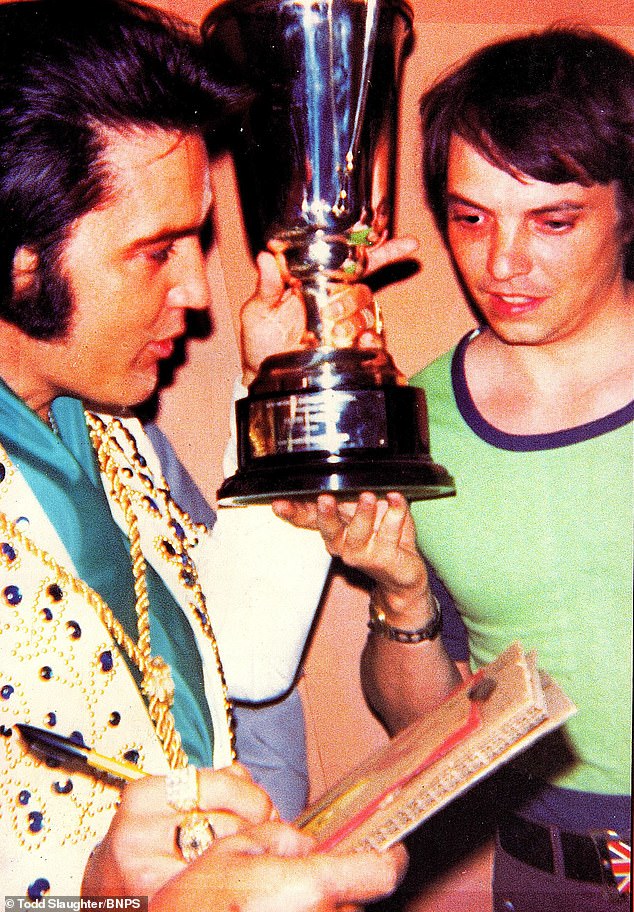 Todd Slaughter with Elvis in 1973. One of the world’s most renowned Elvis Presley fan clubs is expected to sell for a staggering £100,000

Before the internet, joining a club was the only way that devotees could keep up to date with and interact with their idol. But now, although the website gets 50,000 hits a week, these don’t translate into the money needed to keep the club going.

You don’t have to be a jumpsuit-wearing Elvis fanatic to join. Most members are ‘normal people’, says Todd. ‘They don’t dress as Elvis or walk around with quiffs.’

The club holds regular conventions around Britain where fans gather at a holiday park for a week of Elvis-themed fun.

The original generation of fans now come with children and grandchildren in tow. Some arrive in Bentleys, others by bus. The King cuts across class boundaries.

For a long time, Todd was unaware that he had at least one thing in common with his idol.

Although he had long known that he was adopted soon after his birth in 1945, Todd discovered only in 2014 that he was the product of a brief relationship between a Devon girl and an American GI.

But when he first heard The King, he had no idea that his own father had, like Elvis, been an American soldier. Holidaying in Great Yarmouth with his adoptive parents, aged ten, he heard Elvis playing on the jukebox and was hooked.

‘He was the first star of his kind,’ says Todd. ‘He had everything: the voice, the looks, the style, and he made films that we could all go and see. Yet there was always that mystery, that untouchable side to him that got into my veins and has stayed there. He was wonderful, this incredibly good-looking guy who conquered the world.

‘And he was loyal to his fans — he was doing a hundred concerts a year when other stars, like Elton John, only did about four.’

After leaving school, Todd became a mechanical engineer and worked for Radio Luxembourg and Radio Caroline.

In 1962, the first satellite was launched by the company Telstar, providing a transatlantic television feed.

Todd started a campaign for ‘Elvis Via Telstar’ so his British fans could watch him live on TV.

The campaign, organised in the music Press, began taking over his waking hours. He was inundated with letters from Elvis fans and launched a petition for the star’s colourful manager, Colonel Tom Parker, to grant their wishes.

It took more than ten years but on January 14, 1973, Elvis Presley made history as the first solo entertainer to hold a live concert broadcast internationally via satellite.

Hundreds of millions around the world tuned in to watch Aloha From Hawaii. ‘We’d never have thought of it but for you,’ Parker later told Todd.

In 1967 Todd bought the fan club, which had been set up in 1957, from the publisher of Pop Weekly and Elvis Monthly magazines. He gave up the day job to run both the club and the monthly magazine full-time.

But, given that there seemed no sign of Elvis performing in Britain, Todd spotted an opportunity.

In 1972 he chartered an aircraft to take 180 Elvis fans on a tour of the U.S., visiting Nashville, Tupelo (Elvis’s birthplace), Memphis, Los Angeles and Las Vegas, where they saw the King perform.

Colonel Parker took them to the green room after the concert and here, at last, Todd met his hero. He presented Elvis with an award from the NME magazine. 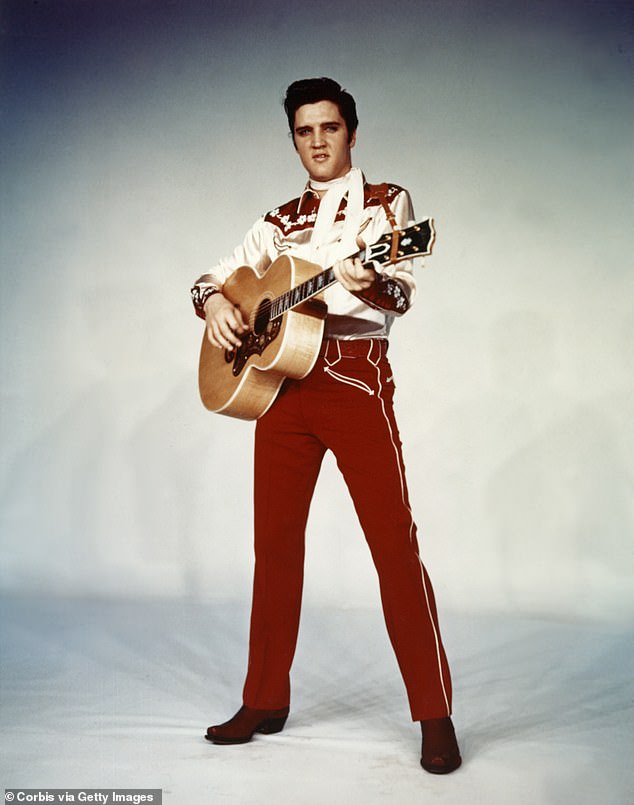 Todd says: ‘Elvis walked in, and the amazing thing is we didn’t notice him at first. He had changed into a suit. Then Colonel Parker brought him over to us. He was quite the gentleman, calling all the men ‘Sir’ and shaking hands with them and all the women ‘Ma’am’ and letting them kiss him.

‘By then, I’d already met Sonny and Cher, The Beatles, The Rolling Stones and Ike and Tina Turner but none of them prepared me for meeting The King. He was on a higher plane: a mighty presence.’

Todd met Elvis twice more, the final time in 1977 when he took 200 British fans to what turned out to be Elvis’s last two concerts, in Cincinnati and Indianapolis. ‘You are going to have to come to England to see your fans,’ Todd told him. ‘One day, I will,’ Elvis assured him.

He presented Todd with an award for having been president of the UK fan club for ten years. ‘Both the Colonel and I appreciate what you do for my English fans,’ said Elvis. ‘Enjoy the show, Todd.’

Though devastated, he was determined to keep the flame alive, organising ‘pilgrimage tours’ taking British fans to Memphis and later had to sell his collection of Elvis memorabilia to keep the club going.

This included some of the shirts The King had worn, sold for about £10,000 — though Todd says they would fetch far more today.

Todd stayed in touch with Colonel Parker until Parker’s death in 1997.

When Todd himself became seriously ill and had to have a heart transplant in 1994, the Colonel rang every day to check on him.

Now, after suffering pneumonia and pleurisy last year, and with his eyesight failing, Todd is reluctantly passing on the torch.

Next year — the 45th anniversary of Elvis’s death — there are plans for 350 club members to travel to Memphis with a film crew.

And a new film, simply called Elvis and starring Tom Hanks as Parker, is due for release in 2022. Todd, who is himself writing a book about the Colonel, hopes that it will introduce his music to a new generation of fans.

‘I’ve been devoted to Elvis for such a long time. It’s an obsession,’ he says. ‘I’m proud to have played my part to keep the legend alive.’